World Bank chief Jim Yong Kim tops the bill at a major climate summit in Paris next Tuesday, but part of the institution is still heavily promoting fossil fuels 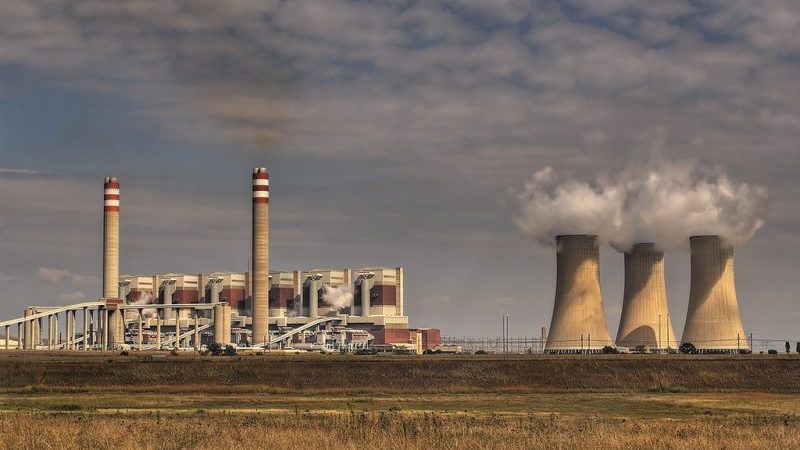 Next Tuesday, national and business leaders are due to meet at the One Planet Summit in Paris, France at the 2-year anniversary of the Paris Agreement on climate change. Among expected announcements, we are likely to hear commitments by organisations to green their finance.

World Bank president Jim Yong Kim tops the line-up. He recently announced that the Bank would start reporting on its portfolio emissions. This was one of the first asks from the Big Shift Global coalition, which is calling on the World Bank to shift its investments from fossil fuels to clean energy, as well as providing more transparency about the impact of its investments.

However, there is one World Bank institution which hardly has made any progress on greening its finance or investing in clean energy: the Multilateral Investment Guarantee Agency (MIGA).

MIGA is a member of the World Bank Group headquartered in Washington DC, and has the mission of promoting foreign investment by providing guarantees to protect investors against non-commercial risks such as political risks.

According to new data analysis from Oil Change International, the organisation’s guarantees to energy were worth $1.9 billion in 2016, of which $0.9 billion went to fossil fuel projects and around $1 billion was classified as “other”, including large hydro.

None of the guarantees supported by MIGA in 2016 went to solar, wind or geothermal energy.  Large hydropower is not included in Oil Change’s categorisation of clean energy, because research has revealed that in some cases hydroelectric dams can seriously damage the climate by driving deforestation and releasing carbon dioxide and methane. 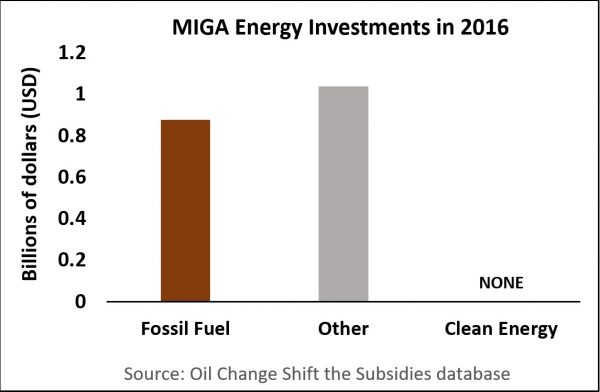 MIGA’s total issuance was around $4.3 billion in 2016, which means around a fifth of MIGA’s total portfolio was for fossil fuel projects. Every dollar MIGA guaranteed in 2015 was claimed to mobilise $2.50 of private investment, multiplying the effect.

That puts the World Bank Group among the dirtier of the “big six” development banks. When E3G compared energy-related climate finance to fossil finance earlier this year, we found the greenest institutions were the Inter-American Development Bank and European Investment Bank.

In 2016, MIGA issued a $783 million guarantee to Eskom, the public electricity utility in South Africa. While this was not a direct investment in coal, Eskom is the largest electricity producer in Africa, with coal making up a large portion of its generation. Eskom is caught up in allegations of corruption and is accused by renewable lobbyists of costing jobs by delaying contracts for clean energy projects.

There are signs of fossil fuel support continuing into 2017, including to a risky offshore gas investment in Ghana.  A proposed guarantee of up to $450 million will support development of hydrocarbon reserves located 60 kilometers offshore. MIGA’s involvement will cover against the risks of war and civil disturbance.  Ghana and Cote D’Ivoire, as well as many other countries where MIGA is investing in fossil fuels, are already experiencing the negative impacts of climate change on agriculture and food security, with severe consequences for the poorest people.

Further development of gas reserves is not in line with the Paris Agreement, since the potential carbon emissions from the oil, gas, and coal in the world’s currently operating fields and mines would take us far beyond 2C of warming. In fact, reserves in currently operating oil and gas fields alone, even with no coal, would take the world beyond 1.5C, Oil Change International calculates.

MIGA has also been linked to construction of the controversial Trans-Anatolian Pipeline (TANAP), part of the proposed Southern Gas Corridor that would bring gas from Azerbaijan to Italy. MIGA has recently proposed a guarantee of almost one billion dollars.  This same project is linked to the Azerbaijani Laundromat corruption scandal in which politicians were implicated in money laundering.

Recent announcements suggest MIGA may be moving in the right direction. MIGA’s website shows a number of proposed guarantees for solar energy in Egypt as well as solar energy in Jordan. A guarantee has also been proposed for a solar plant in Nigeria. This shows MIGA catching up with other World Bank institutions that already have years of experience in clean energy. In 2019, MIGA will also join the rest of the World Bank in reporting on its carbon footprint.

The Overseas Development Institute (ODI) has suggested guarantees should be used more by development finance institutions to expand climate investment. Instead of de-risking fossil fuels, MIGA could lead the way in making clean energy a safer investment proposition.

On climate change, there are signs that MIGA could soon become part of the solution rather than part of the problem.

Helena Wright is a senior policy advisor at E3G