Canada and China to strengthen cooperation on climate, carbon markets

On a state visit to Beijing, Canadian PM Justin Trudeau struck a deal that will weave climate action into a potential trade agreement 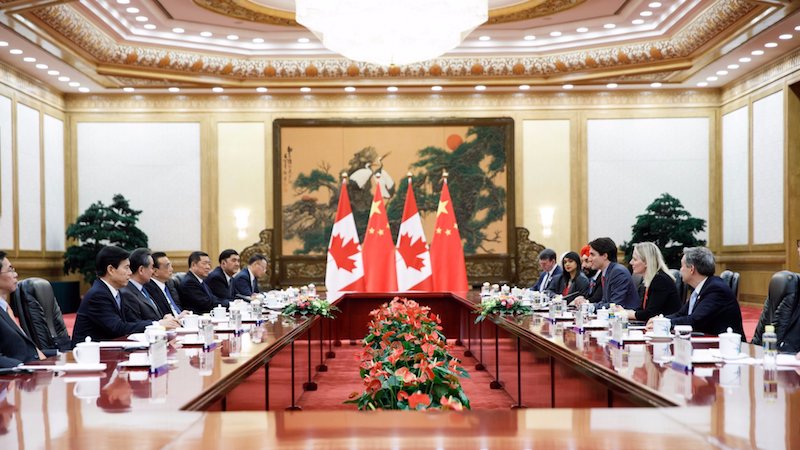 The premiers of China and Canada have announced deeper collaboration on climate change and energy, including on carbon markets.

On a state visit to Beijing, Canada’s Justin Trudeau and China’s Li Keqiang issued a joint statement that reinforced their commitment to the Paris climate agreement. “It will not be renegotiated”, they said – a message to US president Donald Trump.

The two countries agreed to establish a ministerial dialogue on climate change, to include cooperation on developing carbon markets. Canada has set a nationwide carbon price, while China is looking to establish a national emissions trading scheme, raising the possibility of future international trade in carbon credits.

They also flagged a closer partnership at UN climate talks. Canada and the EU have vocally championed climate action at these meetings since Trump announced the US was withdrawing from the Paris deal. China has appeared more ambivalent.

Catherine McKenna, Canada’s minister of environment, was at the negotiating table in Beijing. She said the climate announcement, which was released amid discussions of a potential bilateral trade deal, was important for shaping the ongoing trans-Pacific relationship.

“Environmental protection is key to our progressive trade agenda and will provide even greater opportunities for businesses to provide innovative solutions for clean air, water and soil that will lead to good, middle-class jobs and prosperity in both countries,” she said.

The two countries, along with the EU, have made diplomatic efforts during the year to present a united front on climate change. The three hosted a ministerial summit on climate change in Montreal in September.

The statement between Canada and China falls short in detail of a nine page EU-China declaration that was buried at the last minute in June.

Trudeau and Li emphasised cooperation on the deployment of clean energy, while also promising to “promote sustainable energy and resource development, including upstream oil and gas”.

Last month, Canada sent its first shipment of liquefied natural gas (LNG) to China. “An event of great significance at a time when China’s demand for LNG is growing rapidly,” according to state newspaper China Daily.

On Monday, Climate Home News reported that gas shortages on northern China were leaving poor households to shiver through nights as cold as -6C.