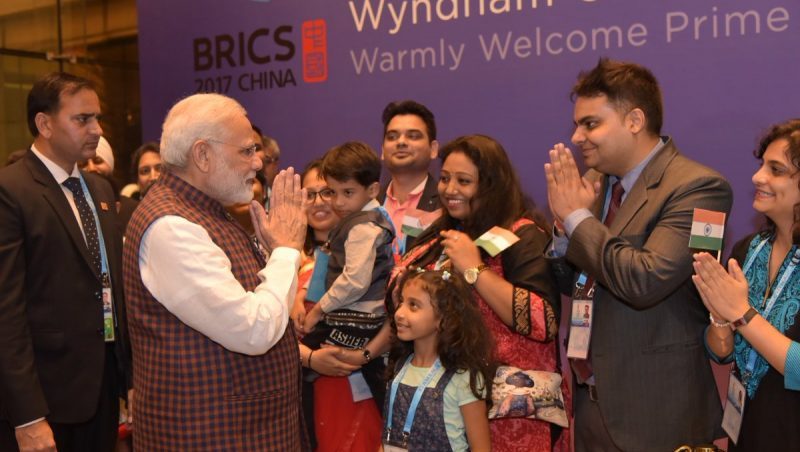 India prime minister Narendra Modi called on leaders of other emerging economies to back his major solar initiative at a summit in Xiamen, China on Monday.

At the Brics meeting of leaders from Brazil, Russia, India, China and South Africa, Modi promoted the International Solar Alliance (ISA), one of his pet projects.

“Affordable, reliable and sustainable access to energy is crucial for development of our nations. Renewable energy is particularly important,” he said.

He urged the leaders of the Brics countries to “work closely with ISA”, which has 39 signatory nations but has been ratified by only nine.

The alliance aims to create a body that will help the world meet a $1 trillion solar energy investment goal by 2030. It was first announced jointly by Modi and former French president François Hollande in 2015.

Modi is aiming for it to become a legal entity later this year at a summit on solar energy, which will be timed for new French leader Emmanuel Macron’s visit to India in December. But before then it needs to gain another six ratifications to reach its minimum membership of 15.

“My objective – and we are working hand in hand with India on it – is to make significant progress by December in setting up the ISA,” French minister for ecological and inclusive transition Brune Poirson told the Times of India this week.

Its five national members have each pledged starting capital of $10bn towards the NDB, which was conceived to challenge western dominance of development finance.

However, only a fraction of that money has materialised to date and it remains a small player compared to other multilateral development banks. The only sign of new funds at the Brics summit on Monday was $4 million from China to support the bank’s operations.

While citing sustainability as a core principle, the bank has refused to rule out financing coal power, one of the biggest global drivers of climate change.

“In the future, I’m sure there will be projects where ambiguity might come in,” chief financial officer Leslie Maasdorp told chinadialogue.

“For example, there are ways in which one can do clean coal, so you can do a coal-fired power station, but you can do it in such a manner that you apply the latest technologies to reduce the emissions footprint.

“We have not entered that space yet. At the moment our projects are thankfully pure green in that respect.”

Aside from the governments’ flagship scheme, the forum offers opportunities for the private sector.

Brics countries accounted for 38% of the world’s installed renewable energy capacity in 2016, according to the International Renewable Energy Agency (IRENA) – a leap from their 22.5% share in 2015.

China is aiming to get 39% of electricity from nuclear and renewable sources by 2020, while India has an installation target of 175GW by 2022. Brazil, Russia and South Africa have smaller but growing clean energy sectors.

“In the following years, China’s wind energy industry will become more international,” said Qin Haiyan, head of the Chinese Wind Energy Association, in a statement. “Being international means, first of all, that Chinese wind companies need to go out and enter the overseas market.”