Climate threatens ‘Himalayan Viagra’ fungus, and a way of life

A valuable fungus reputed to be an aphrodisiac has been disappearing from the mountains of Nepal, taking with it a valuable source of income 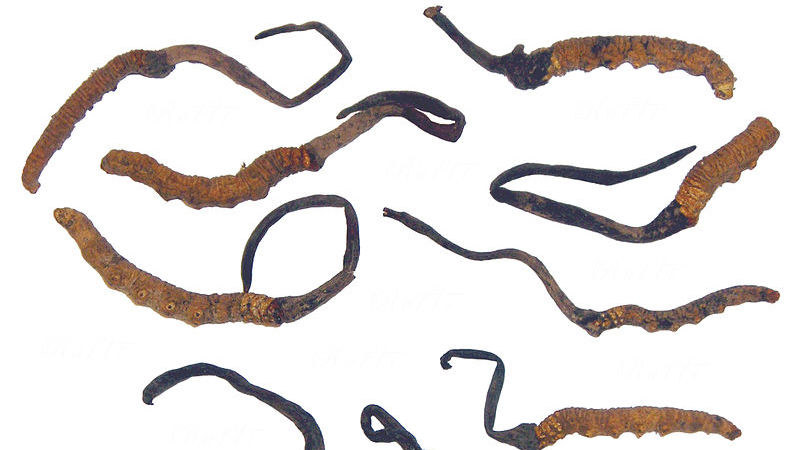 Cordyceps sinensis grows from the head of caterpillar larvae and is thought to be an aphrodisiac (Photo: William Rafti Institute)

A Himalayan fungus used in Chinese medicine, which underpins the livelihoods of communities of harvesters in Nepal, is under the threat due to climate change.

Harvesting the Cordyceps sinensis fungus, called ‘yarsha gumba’ in Nepal, provides a livelihood for Himalayan dwellers. The fungus fetches up to Rs 2,800,000 (£20,000) per kg in raw form. During the peak season of yarsha collection, locals drop everything to pursue fungus hunting, including their usual profession. Even schools remain closed during yarsha collecting seasons.

The fungus grows on the head of the larvae of caterpillars and locals crawl on hands and knees to find it. The work is hazardous in the high altitude regions where the fungus grows, with hunters young and old regularly succumbing to exposure.

Himal Aryal, who has been involved in the yarsha trade for eight years in Rukum, a mountain district west of Kathmandu told Climate Home that 90% of buyers were Chinese.

“It is known as Himalayan Viagra as it helps to increase libido in both sexes, for which only a few rich people buy the fungus,” he said.

But local yarsha hunters have been experiencing a huge drop in the availability of the fungus in recent years.

Bibek Jhakri, who has also collected the fungus for eight years, said: “I used to find 50-60 yarshas a day during my earlier years, while now finding four to five per day is a matter of luck for me.” He said he was afraid his major source of income won’t last.

Most of the yarsha hunters in Thabang, the western district where Jhakri is from, are worried about their seasonal source of income. They could, a decade before, rely almost exclusively on income generated by yarsha collection. Collectors in hilly areas typically lack academic education and production from agricultural land in those areas is marginal.

A 2016 study published in the journal Biological Conservation, found a combination of climate change and untimely and over harvesting were to blame for the previous falls. Whereas in future the range of the fungus would be reduced by up to a third because less snow would fall in the pastures and snow would melt earlier in spring.

High mountains are experiencing a more rapid change in temperature than lower elevations. “There are strong theories that guide the expectation of climate change being comparatively higher in mountains than at sea level,” Nicholas Pepin, a geographer at the University of Portsmouth, told Climate Home.

In Mugu district, hunters Pabitra Rokaya and Dhir Bahadur Bohara, have experienced sharp decrease in yarsha availability in recent years and people around them have given up. “[We] are able to find only a tenth of what we used to in past years. If the decline happens yearly like this, we could no longer depend on yarsha as our primary source of income,” said one.