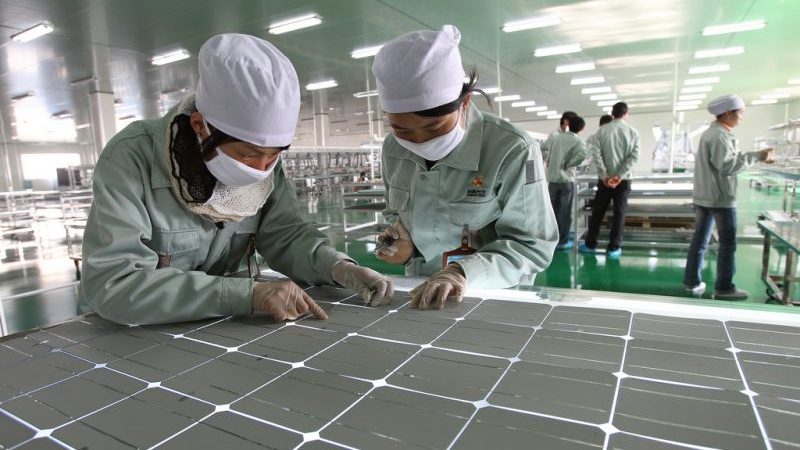 By Sapna Gopal in Hyderabad

When former prime minister Manmohan Singh launched India’s National Solar Mission in 2010, he wanted to build a domestic manufacturing base.

“If the mission is to become a reality, we will have to create many solar valleys on the lines of Silicon Valley that is spurring our IT industry across the country,” he said, as reported by the Hindu.

His successor Narendra Modi enthusiastically adopted the solar mission, increasing the target for installed capacity from 20GW to 100GW by 2022.

But the dream of India becoming a manufacturing powerhouse for photovoltaic panels has fallen by the wayside. Following a World Trade Organization ruling, the government is due to end a “domestic content requirement” (DCR) on 14 December, forcing the fledgling industry to compete with China.

The loss of manufacturing is not expected to hold back solar installations. Even with the protectionist policy, domestic manufacturers had not made a big dent in the market. Project development is a much bigger employer.

Solar tariffs have fallen rapidly in recent years, largely due to the availability of Chinese panels, which Prabhu says are 10-20% cheaper than Indian-made. “The government is all for lowest power prices and it is doubtful they will disrupt the markets when they are getting solar power at cheaper prices than coal.”

But some are worried about handing the already-dominant Chinese too much market clout. “Once DCR goes, the Chinese are free to do what they want. In fact, they have already begun hiking the prices. Whether they give us the same quality or a different one is what remains to be seen,” says an industry expert who asked not to be named.

An official from the renewable energy ministry tells Climate Home there will be “some kind of policy” to support manufacturers in future. “[The government] doesn’t want to remain dependent on imported solar cells modules and we are committed to supporting our industry. We have to give domestic solar makers a secure market, only then they can survive.”

Prabhu is sceptical India can bridge the growing competitiveness divide with China, however. “While the Chinese have invested significantly in R&D and boosted efficiencies, we do not see any R&D spending by the Indian government or manufacturers,” he says. “Currently, the Indian module manufacturing business model is built on importing Chinese cells and assembling them in India.”