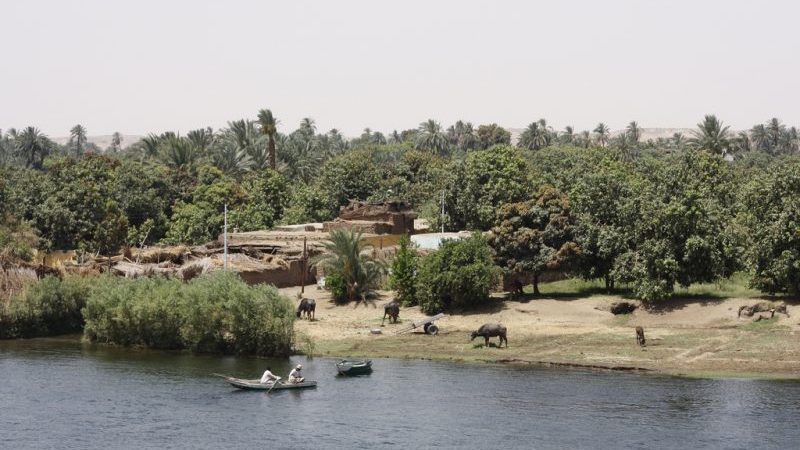 Egyptian farmers depend on the Nile to irrigate their crops (Pic: Flickr/Florian Lehmuth)

By Aya Nader in Cairo

“The land has become very dry,” observes Mahmoud Abo Khokha, a farmer from Al Monofeyya governorate, in Egypt’s Nile delta. “Drought is no longer predictable; it used to hit a certain 15 winter days. The whole year’s crops could be destroyed because of one week’s drought.”

Like most farmers round here, he blames Ethiopia. They are under the impression that a massive hydropower dam being built upriver is already affecting their water supply.

In fact, the Grand Ethiopian Renaissance Dam is only half way to completion. Widely circulated satellite photos showing a lake behind the dam have sparked rumours – and denials – the dam has started to fill. The water scarcity farmers have experienced to date has other causes: climate change and the demands of a growing population.

But during the 5-15 years it is expected to take to fill the reservoir behind the 1,800 metre-wide barrage, the Nile’s fresh water flow to Egypt may be cut by up to 25%.

“Nobody is telling farmers how to mitigate and adapt to climate change,” says Magda Ghoneim, a socio-economist and professor of agricultural development at Ain Shams University. “Adding the pressure of a dam puts Egypt on the verge of catastrophe. Soon enough we won’t [find food to] eat.”

The challenges for farmers are myriad: new diseases and insects, unprecedented humidity, rising seas contaminating groundwater with salt. Indeed, when Abo Khokha tried pumping underground water to make up for reduced river flow, he found only half the usual volume, with a higher level of salinity.

A study recently published in Nature found that climate change is bringing greater variability in the Nile River flow this century compared to the last. In the Nile’s seven-year cycle of flood and drought, the former is becoming heavier, and the latter more extreme.

Egypt’s five million feddans (21,000 square kilometres) of crops consume more than 85% of the country’s share of Nile water. With an annual supply of 600 cubic metres per person, the country is approaching the UN’s “absolute water scarcity” threshold, as the population closes in on 100 million. Water is a sensitive subject.

Although Ethiopia claims to have taken climate change into consideration in the dam’s design, the government did everything at the same time: construction and civil works, financing, and social and environmental impact studies, explains Emanuele Fantini, a researcher at IHE Delft Institute for Water Education. “So by the time these studies are concluded, we are already in front of the fait accompli”.

Building was under way when the governments of Ethiopia, Egypt and Sudan – sandwiched between the two – in 2016 agreed to commission an independent study from Artelia, a French consultancy. “We are not sure if and when the results will be made public,” says Fantini. “They should be made public so that the accuracy can be checked by the international scientific community”.

So far, though, there has been little attempt to explain the risks to those at the mercy of the weather and geopolitics.

Alaa al-Zawahri, an Egyptian member of the tripartite committee studying the effects of the dam, tells Climate Home: “There are several scenarios, but nothing certain. Some studies predict a rise in temperature and thus little rain, and others predict more rain”. Diaa al-Qousi, a water specialist who worked for government, says the findings point to heavy rains for the next 30 years, then a huge drop the 60 years that follow.

Asked if the different conclusions have been communicated with farmers, al-Qousi says “farmers would not understand such specialists’ findings”. Government is selective about what it releases to media, adds al-Zawahri: “Some information, like worst case scenarios, might cause unnecessary panic.”

In the absence of reliable information, farmers turn to conspiracy theories and militaristic fantasies.

Qatar “is funding the dam, like it is funding terrorism” to harm Egypt, claims Mohamed Nasr, who owns three feddans in Al Gharbeyya. There is no evidence for this common rumour; the Ethiopian government says it is funding the project nationally.

Ethiopia will not be allowed to alter the balance of water supply along the river, Nasr asserts: “Egypt’s water share is internationally known. If the share is touched, the dam will be completely removed.”

Osama Saad, a farmer in the Upper Egypt governorate of Minya, is more explicit: “People talk about how the president should bomb it.” The idea is not alien to higher level discussions around the dam. Previous leaders have threatened military action.

Yet work on the 6GW dam, a prestige project for the Ethiopian government, has continued unabated.

Al-Zawahri outlines some peaceful options for responding to water stress. The government is looking into telemetry, water-saving irrigation systems, and desalination. A navigational course from Lake Victoria to the Mediterranean is on the table, which would provide eight billion cubic meters more water for Sudan and Egypt. Egypt can also manage its own High Aswan Dam more efficiently to decrease evaporation of water. “These plans are to be applied gradually,” he says.

Water expert al-Qousi is upbeat: “The Egyptian farmer has been cultivating lands for seven thousand years, and has always found a way around water shortages.”

Ghoneim begs to differ. “Farmers have traditional knowledge, which they lived by for a long time. But this knowledge is now falling short,” she says. “It is not an awareness problem that faces farmers, it is an issue of the state obstructing information.”

This article previously said the dam had started filling. It was updated to reflect that others denied this was the case.