The US said climate change had “a range of implications for the effective enjoyment of human rights”, in a departure from recent diplomacy and Trump’s rhetoric 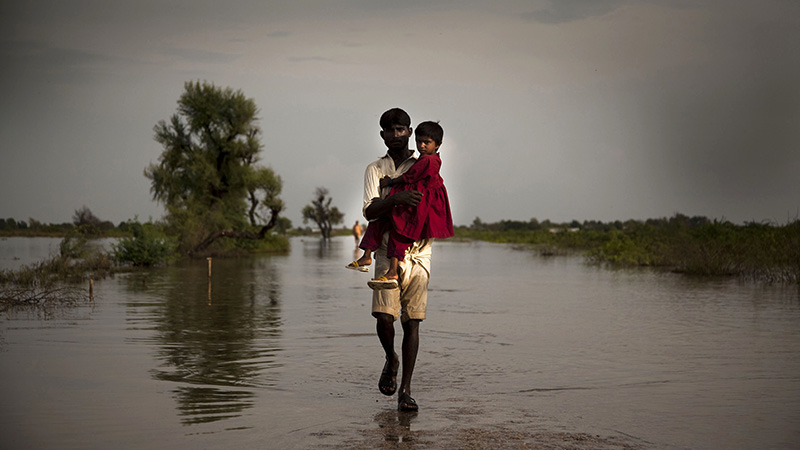 Countries agreed that the human rights of children must be protected as they are particularly vulnerable to climate change (Pic: UNICEF)

The UN Human Rights Council has adopted a resolution that calls for the protection of human rights from the impacts of climate change, with the support of the US.

Two weeks of discussions began with much uncertainty regarding the role that the US would play after the decision by the US president Donald Trump to withdraw from the Paris climate agreement.

After intensive but constructive negotiations over the wording, Bangladesh, the Philippines and Vietnam proposed a resolution for adoption by all members of the Council on Thursday.

Addressing the Council as governments were about to consider the adoption of the text, US representative Jason Mack cleared any doubts about the US position on this resolution.

“As we said previously on this topic, the effects of climate change have a range of implications for the effective enjoyment of human rights. On this basis we join consensus,” said Mack.

The recognition by the US of the importance of continuing work on this issue contrasted with Trump’s speech three weeks ago, which framed the Paris Agreement as an injustice against the US economy.

The US has stood aside in recent international discussions of climate change. Trump’s refusal to offer support to the Paris agreement lead to a split at the recent G7 summit in Italy.

However Mack did raise concerns about references to the Paris deal in the Council resolution. In one of the few contentious parts of the negotiations, the US said the Human Rights Council should not interfere with the formal UN climate negotiations, a risk the US saw as encouraged in the eventual resolution.

Nor would the US brook any language that compelled countries to take steps inside the Paris accord or out.

“Any calls for climate action in this resolution can only affirm actions that countries choose to take,” said Mack.

On the other hand, German ambassador Antje Leendertse, speaking on behalf of the EU, stressed the importance of including considering human rights principles with​in the climate talks.​

Introducing the text, Duong Chi Dung, permanent representative of Vietnam to the UN in Geneva, said the issue required “a comprehensive approach to the issue of climate change bearing in mind intertwined connection with human rights, including social and economic rights”.

The resolution focused on two specific issues. Firstly, that children are among the groups most vulnerable to the adverse impacts of climate change. It insisted on the recognition of existing obligations under international law for governments and businesses to protect the rights and best interests of children when taking climate action.

At an event parallel to the negotiations, Marilena Viviani, director of UNICEF’s Geneva office, said “500 million children live in flood-prone areas, 160 million are exposed to severe drought, and 115 million are at high risk of tropical cyclones”.

Governments also addressed the specific challenges related to the protection of the rights of climate-induced migrants.

“With the ever increasing adverse impacts of climate change, these groups of vulnerable people are being even more vulnerable and marginalised” said Bangladeshi representative Robiul Islam. The council mandated the UN to examine challenges and opportunities for human rights protection in the context of climate-related migration.

The recognition by governments of the interlinkages between climate change and human rights required many years of debates and negotiations under the auspices of the UN bodies working on each of these issues.

“The global consensus on this resolution – including on issues that often lead to heated political discussions in other UN fora – indicates that the importance of addressing these linkages is now better recognised by governments” said Yves Lador, representative of EarthJustice to the UN in Geneva who followed these conversations since their inception.

Sébastien Duyck is a senior attorney at the Centre for International Environmental Law.