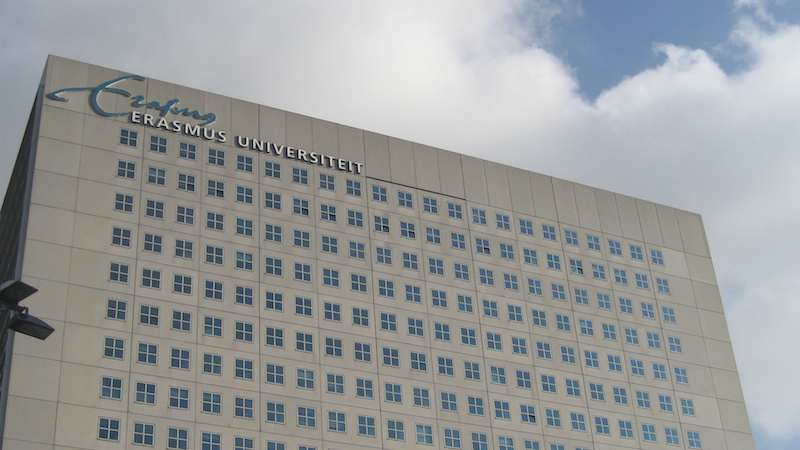 The Rotterdam School of Management, at Erasmus University has been questioned over its ties to the fossil fuel industry (Photo: Vysotsky)

Funding from Shell and other oil majors has turned a prestigious Dutch University into a conduit for fossil fuel policy gambits, according to an explosive new report, with companies given strategic influence over academic curricula and student selection.

A parliamentary debate about the allegations was immediately scheduled, despite extensive denials by the Rotterdam School of Management (Erasmus University), one of Europe’s largest and best-ranked business schools.

At the heart of the row is a partnership contract (zip file) agreed with Shell in 2012 which allows the company “to potentially influence the design of the RSM curricula and the profile of students who attend the Bsc/Msc/MBA programmes”.

The contract, which Climate Home has seen, says that “ideally, Shell would be able and willing to feature in the Masters courses of the seven Msc programmes”.

The fossil fuels firm has a “substantial interest” in recruiting MSc students and would like to approach student groups with “targeted communications,” the contract says.

To that end, the firm can “identify speakers and guests who will contribute to the students’ understanding of Shell over a possible variety of courses.”

Shell RSM Partnership 1of3 by Karl Mathiesen on Scribd

Vatan Hüzeir, the report’s author and director of the Changerism think tank, blamed cuts to government education budgets and an increased reliance on business school rankings, for an undermining of academic independence.

“In various ways RSM supports business models that depend fundamentally on fossil fuels production and consumption,” he said. “That makes the faculty complicit in facilitating climate change. The far-reaching conflation between science and industry undermines the societal role of universities and their independence.”

A statement put out by the university, which has a triple accreditation and stellar alumni list, said the report was “tendentious, biased and contains factual inaccuracies”.

Marianne Schouten, a spokeswoman for the RSM, told Climate Home the school sees contacts with multinationals, including Shell, as a modus operandi and insists that it does not allow commercial interference with course content or individual student selection decisions.

Schouten said: “We ask advisory board members to think long and hard about curriculum but only on a meta level, not on a content level.”

The contractual permission to exert influence over curricula and student profiles was a “missing nuance,” she accepted. “It is a mistake by us to be honest. We should have phrased it differently.”

“[Neither] Shell nor any other company, directly influences our curriculum for any programmes, be it on the bachelors or the MBA level. But on other hand accreditation bodies require us to work with companies on this meta-level, because they need the students to be employable once they graduate.”

The report though, paints a picture of entanglement that goes far beyond accreditation protocols.

Shell, ExxonMobil, GasTerra and GDF Suez have all paid RSM for advice on how to improve public acceptance of gas drills, in the face of widespread public opposition.

One RSM professor, Henk Volberda, led a Shell-funded research project in 2008 that advised the government to reduce the tax burden on multinationals, such as Shell. Neither RSM nor Shell disclosed that the project had received more than €300,000 from the fossil fuel giant.

Schouten said that the disclosure had not been made because the research was done for an international consortia. That consortia then requested the bill to be sent only to Shell. “We should have stated that in the report,” she said. “It’s not a secret. It just wasn’t put there.”

The Netherlands’ Association of Universities guidelines say donations should be listed, by “external financiers of scientific activities in particular”.

Volberda later became part of a Dutch government team that advised on improving the condition of corporate headquarters, where he used the research as the basis for more calls for tax cuts, the report says. These were eventually implemented, despite strong criticism by several statutory agencies.

Shell also paid for the launch of an academic journal in 1997 by another RSM professor, Cees Van Riel, which subsequently published an article by the company in its first edition. The funding was not publicised.

That same year, Van Riel co-founded a public relations firm called the Reputation Institute with Charles Fombrun, who went on to work on a rebranding project for Shell, which sold the firm as “the world’s most admired company”.

Schouten denied that Van Riel had any financial involvement with Shell, or that the Reputation Institute had represented them. However, Van Riel’s online profile admits that he has worked with the company and recent Reputation Institute literature cites Shell executives as clients.

The RSM has an unquestionably long relationship with Royal Dutch Shell. In 1966, the firm provided a donation of between €300,000 and €1m to spearhead funding of the university’s graduate school of management – which would become RSM almost 20 years later.

Shell and BP retain positions on the RSM’s advisory board today and participate in formulating its strategy, as well as coordinating RSM activities at annual dinners, the study says.

NOTE: A quote from Schouten was amended. The original rendering was “Shell more than any other company, directly influences our curriculum”. This was misheard.