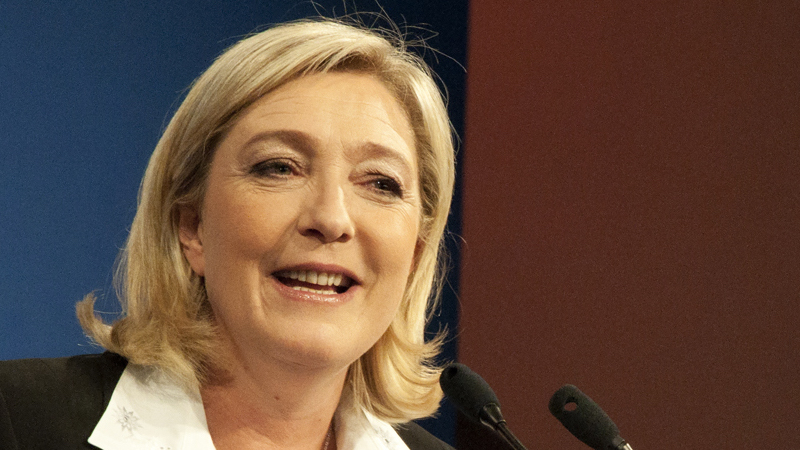 Marine Le Pen, like all major candidates for this weekend's first round presidential run off, has pitched warmer homes to poor voters. (Source: Rémi Noyon)

Energy efficiency has made a surprise breakthrough in the French presidential race, with all four leading candidates setting out ambitious renovation programmes to cut emissions and energy poverty.

Meanwhile, in Britain’s nascent election campaign, Climate Home has learned Labour plans to unveil new rules for landlords to renovate properties to higher efficiency grades, before they can be rented out.

As the tightly-fought four-way race heads towards a first round vote this weekend, building renovations have made climate policy relevant to alienated working class voters in France.

One in three French households are energy poor and, with buildings continuing to account for more than 40% of carbon emissions, renovations have stealthily climbed the political agenda. An existing law that obliges renovations of all buildings in the ‘F’ and ‘G’ energy classes by 2025 has popularised such programmes.

Less striking but better-costed is a €4bn a year renovations programme proposed by the front-runner in opinion polls, Emmanuel Macron, who would also scrap a one-year stay on energy transition tax credits and introduce free efficiency audits.

Even the neo-fascist Marine Le Pen has a manifesto pledge (number 132) to make insulation a “budgetary priority” in public procurement policy.

Adrian Joyce, the director of Renovate Europe, which is promoting the issue, hailed the new-found prominence that energy renovations were receiving in the election.

“It represents a political breakthrough in that a solid cross-party consensus around the need to accelerate energy renovation has emerged,” he told Climate Home.

In France, a broad alliance of businesses, trade unions, Catholic networks, environmentalists and housing associations were key to turning energy renovations into a consensus issue.

Danyel Dubreuil, a spokesperson for the Renovons (Lets Renovate!) campaign, which has lobbied the candidates on the issue, said: “One of the things that surprised the candidates’ teams was that we were so diverse, and that we produced a cost-benefit analysis.”

“It was a shock for them to see that this was such a big issue – with 7m flats or houses in really bad shape – and that it would not be so expensive to upgrade their energy ranking.”

Warming up cold homes could have universal appeal, said Joyce.

“We spend 90% of our time in buildings so working on them affects everyone positively. The sooner other countries facing elections – like the UK and Germany – witness a similar breakthrough, the better,” he said.

Scotland is currently in the midst of a public consultation about how to upgrade its building stock after declaring energy efficiency to be a national infrastructure priority.

But in the wider UK a remaining Green Deal obligation on landlords to improve the efficiency of energy-leaking buildings later this decade has been so whittled down by the government as to make it unworkable, according to Erica Hope, senior associate at the European Climate Foundation.

Barry Gardiner, UK Labour’s shadow climate spokesman described transport and buildings emissions as “the biggest challenge to meeting our climate budgets”. The challenge is likely to spawn a new election initiative in that country too.

“We will bring forward clear [building efficiency] standards as part of our manifesto,” Gardiner said. “We are looking to upgrade the obligations on landlords in particular to make sure that properties have to be of a certain energy efficiency level, within a certain timeframe, before they can be rented out.”

“The key thing for the UK is how we go about renovating older housing stock and that is where we need to set regulations in place,” he added.

Britain has some of the worst-insulated housing stock in Europe. Cold homes cost the NHS some €1bn a year in direct treatment, and are rated the second highest risk on Britain’s housing health and safety system.

In just one city – Liverpool – energy poverty was fingered as the culprit in 500 deaths and around 5,000 illnesses in one survey in 2013.