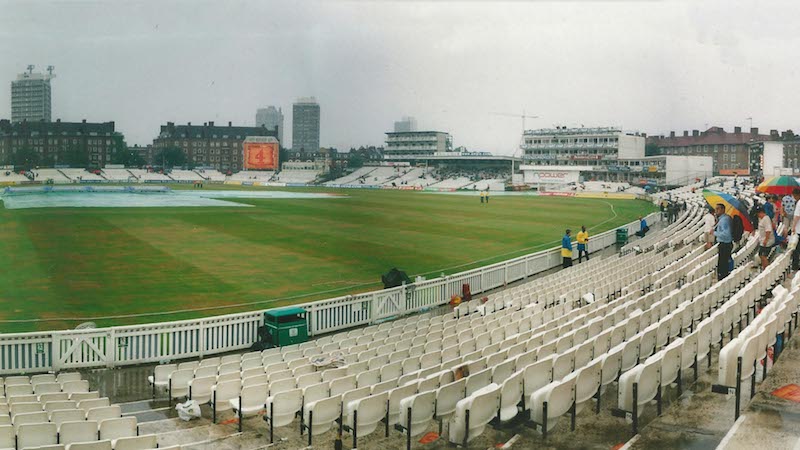 Rain washes out the 5th Ashes Test between Australia and England at the Oval in 2001. (Photo: John Garghan)

Cricket’s global administrators love a board meeting – all mahogany chairs, glass tables and endless supplies of upmarket coffee. There is much to discuss, after all. Dollars. Participation. TV deals. Future tours. Behaviour. Match-fixing. Governance. But one subject is missing.

Climate change is hardly – if ever – on the agenda, yet, of all the major pitch games, cricket will be hardest hit by a warming world. From the ochre-coloured Australian outback to the windswept Scottish coast, cricket is defined almost entirely by the weather conditions. If they change, so does the essence of the game.

Many of the big cricket-playing nations are on the frontline of climate change. In 2016, a major match in India had to be moved due to a severe water shortage. And pitches in Bangladesh – a country threatened by intense cyclones, rising sea levels and increasing temperatures – are also feeling the pressure.

Sri Lanka and the West Indies are vulnerable to rising sea levels. And intense droughts, interspersed with periods of equally intense rainfall, are disrupting the game in southern Australia.

In Britain, there is a danger that what are considered to be traditional weather conditions for cricket could disappear within 20 years.

Russell Seymour of the venerable Marylebone Cricket Club (MCC) – one of the oldest cricketing bodies in the world – is the UK’s only cricket sustainability manager, and he is deeply concerned about how the game will cope with changes in climate.

“A match can be changed fundamentally with a simple change in the weather,” says Seymour.

“In the morning, sunny conditions make batting easier, because the bowlers can’t get any movement in the warm, dry air. Cloud cover after lunch increases humidity, and the ball starts to move. After a shower, conditions change again.

“Now imagine what happens with climate change. There will be alterations to soil-moisture levels, and higher temperatures will bring drier air, then drier pitches. This will bring a change to grass germination and growth, which in turn affects the pitch and outfield.”

In other words, the assumptions we make about English cricket, its landscapes and rhythms, will no longer apply. The ball may not move in 2025 the way it did in 1985 or 2005. The old-fashioned English seamer could be on his last legs.

The UK’s weather is likely to become ever more erratic. There are indications that longer, drier summers will be interspersed with more intense downpours.

The England and Wales Cricket Board (ECB) won’t release precise data on how much cricket has been lost to rain over the last 10 years. But, according to Dan Musson, the ECB’s national participation manager, it is considerable.

“There is clear evidence that climate change has had a huge impact on the game in the form of general wet weather and extreme weather events,” says Musson.

“I’ve been at the ECB since 2006 and we have had to implement flood relief efforts on half a dozen occasions, both in season – particularly in 2007, with flooding in the Midlands and the Thames Valley – and out of season, as in December 2015 when winter storms Desmond and Eva ran through the north of England.

“Wet weather has caused a significant loss of fixtures every year in the last five at recreational level, and posed challenges to the professional game.”

In the UK, the recreational game is most at risk: small clubs have fewer resources to protect against the threat, and more difficulty gaining insurance. And many municipal grounds are located on floodplains because the land is usually cheap and fertile. Games are repeatedly called off.

At grassroots level, the ECB has made some progress. They have commissioned research from the UK’s Cranfield University to identify flood risk, produced guidance for clubs, and they run a small grants scheme to fund wet-weather management and preventative measures.

In 2016, more than £1m was doled out to flooded clubs, which are also encouraged to install solar panels, recycle rainwater and look after their equipment. A further £1.6m has been set aside for 2017.

But at an international level, little has been done to mitigate the impact of climate change. The International Cricket Council (ICC) – the game’s governing body – has not commented publicly on climate change or the challenges it presents to the game, nor outlined a grand plan.

The ICC does not set environmental targets for its members and shows little interest in issues such as reducing emissions.

International tours by various countries fail to take green issues into consideration, with no pressure on members to plan a lower-impact itinerary. A recent winter tour by England to India included a mishmash of cross-country flights, when a more sustainable approach could have been taken.

The men – and it is still predominantly men – who run the game are not scientists or activists: they are often ex-players, sometimes businessmen.

They are juggling huge budgets, balancing television deals with the need to proselytise. No one pretends it is easy. As one commentator on the game observed, the role of administrators has traditionally been to “inure cricket against change rather than to enact it”.

Perhaps those who run the game are not worried about the climate, or don’t see the urgency, or are too busy. But prudent businessmen always look to the future and many corporate organisations around the world are now pressuring for action on climate change.

Cricket is slow-bowling its way into the future. It has plenty to lose in a warming world. It also has a moral responsibility to act.

Tanya Aldred is co-editor of The Nightwatchman, the Wisden Cricket Quarterly, which covers contemporary issues surrounding the game. This article was first published on Climate News Network.