Azerbaijan president: gas pipeline to EU will not be stopped

Environmental protests against the $46bn Southern Gas Corridor are baseless, says Ilham Aliyev, who expects to begin exporting gas through the pipeline by 2018 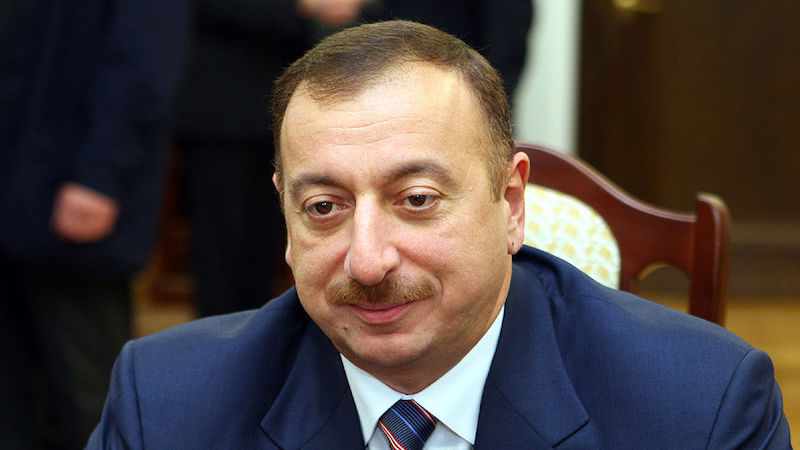 A massive pipeline linking Azerbaijan’s gas fields to the networks of Europe is an inevitability, Azeri president Ilham Aliyev has told his cabinet.

“The implementation of the Southern Gas Corridor is already a reality. True, there are those who want to prevent us. It is natural. We came across these ten years ago,” said Aliyev, as reported by the Azerbaijan Press Agency on Tuesday.

The Southern Gas Corridor is one of the world’s largest fossil fuel projects, with a projected construction cost of $46bn.

It is opposed by environmental and human rights groups on the basis it will lock in fossil fuel dependence and its construction across Georgia, Turkey, Greece, Albania and Italy will expose communities to forced relocations and disruption.

Last month, Azerbaijan was suspended from the Extractive Industries Transparency Initiative (EITI), a global watchdog that sets standards for human rights in countries where the fossil fuel industry operates. Aliyev’s autocratic government had failed to ease pressure on civil society groups, despite repeated warnings from the EITI board.

Speaking to ministers at a quarterly review of the Caucasus nation’s economy, Aliyev said: “I remember at the time when the Baku-Tbilisi-Ceyhan oil pipeline was built, the forces who sought to attack our policy, as well as the Armenian lobby and some circles having a negative attitude to the project, in a variety of ways, mostly with the environmental pretexts tried to thwart our work.

“To a certain extent, they have achieved this. I remember that at that time even some international financial institutions delayed loans. But despite this, in 2006 Baku-Tbilisi-Ceyhan was opened. And today, some circles, outside forces are again trying, under the pretext of ecology, to delay work in some segments of the Southern Gas Corridor.”

Late in March, the Italian government approved the final section of the pipeline, where it crosses the Adriatic into Puglia. Activists immediately launched protests.

Preparations are being made for the pipeline in the southern Balkans, with Greece and Albania’s governments acquiring land from farmers. In Turkey the Trans Anatolian Pipeline (Tanap) section is already well underway.

Grassroots movements are preparing to resist the construction of the pipeline along its course, but in Turkey the risk of suppression is likely to quell real resistance.

Billions in public finance for the pipeline are already approved from the World Bank and Asian Infrastructure Investment Bank. Several other development banks are considering loans. All are being targeted by activist groups to reconsider or reject their support.

Aliyev said their criticisms had “no grounds” and that all environmental standards would be observed.

“I am confident that 2017 will be decisive in this respect, and next year we should mark the opening of the Tanap project,” he said.

The project is proceeding with strong support from within the European Commission, which argues that it will diversify the bloc’s gas supply away from Russian gas. (Although last month Russian state gas company Gazprom and Italy’s Eni signed a deal that paves the way for the Russian company to access to the pipeline).

BP calls it “arguably the global oil and gas industry’s most significant and ambitious undertaking yet”. It is a three-part pipeline that, if completed, will carry gas from the Shah Deniz 2 oil field in Azerbaijan’s Caspian Sea through Georgia, Turkey, Greece, Albania into southern Italy.