Northern spring thaw begins with sea ice at a record low. Nasa scientists say the world has lost an expanse of ice larger than Mexico since 1981 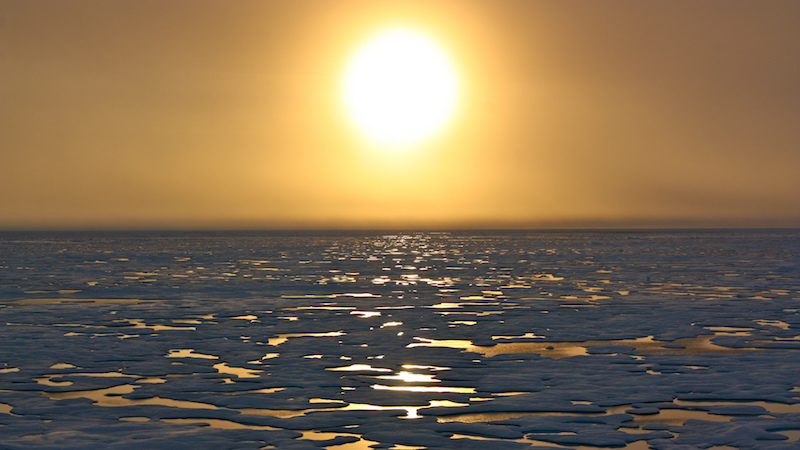 Arctic temperatures have been as much as 20C above average. (Photo:NASA Goddard Space Flight Center)

Only a few days earlier, on 3 March, Antarctic sea ice reached its own new record summer low since satellite observations began in 1979.

And on 13 February the total area of frozen ocean in the two hemispheres was at its lowest: 16.21 million square kilometres, which is about 2m sq km less than the average global minimum for 1981 to 2010.

In effect, the NASA scientists report, the world had lost a chunk of sea ice of an area bigger than Mexico.

“It has been quite extraordinary for several months in the Arctic,” says Julienne Stroeve, professor of polar observation at University College London. “Pretty much all through October, November, December, January, February and now March, we have been tracking record low conditions. I don’t think there has ever been a time in the Arctic when we have seen so many months of just record consecutive low conditions.” 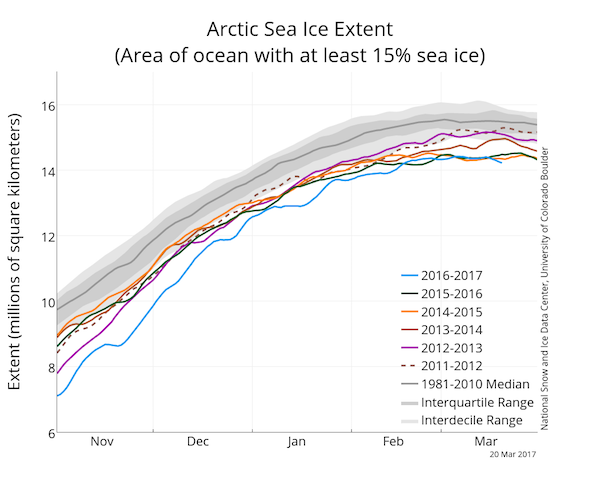 The most dramatic losses of sea ice have over the decades been observed in summer – where the decline has been measured at 14% per decade. Winter shrinkage has been at a much lower rate: about 3% per decade. But the ice has been thinning as well as dwindling in area, and temperatures earlier in the winter were unusually high: 20°C above the average for the time of the year.

Nobody can be sure what will happen once the spring thaw has begun, but polar scientists are expecting the worst. “We are pretty much poised to have really low summer ice conditions,” Stroeve says.

The frozen ocean around the Antarctic continent, too, has scientists worried. Sea ice fell to 2.11m sq km on 3 March. This is below the previous lowest minimum on record, exactly 20 years ago.

The two poles are very different. The Arctic is an ocean surrounded by land, while the Antarctic is a vast continent ringed by ocean, therefore the dynamics of ice formation and loss are not the same. And in recent years, the extent of sea ice in Antarctica had been growing. But this March, at the close of the Antarctic summer, there was a dramatic change.

“It is tempting to say that the record low we are seeing is global warming finally catching up with Antarctica,” says Walt Meier of NASA’s Goddard Space Flight Centre in Maryland.

“However, this might just be an extreme case of pushing the envelope of year-to-year variability. We’ll need to have several more years of data to be able to say there has been a significant change in the trend.”

Both polar regions are affected by natural variation. But the suspicion is that the long-term trend in global warming driven by human combustion of fossil fuels that dump vast quantities of greenhouse gases into the atmosphere must be playing a part. One research group recently proposed that human action might be responsible for at least half and perhaps 70% of Arctic warming.

Southern polar sea ice reached its peak at the end of August, and November, December, January and February all saw rapid declines.

“We have been at record low levels,” says Emily Shuckburgh, deputy head of polar oceans at the British Antarctic Survey. “There is a lot of year-to-year variability, and it was only a couple of years ago we saw a maximum.

“This is just one year where there is a lot of variability, and really understanding what the implications are is the research challenge.”

This article was originally published by Climate News Network.