Study released on Thursday shows a 2016 drought was made worse by climate change – but with March rains predicted to fail, the Met Office has warned of worse to come 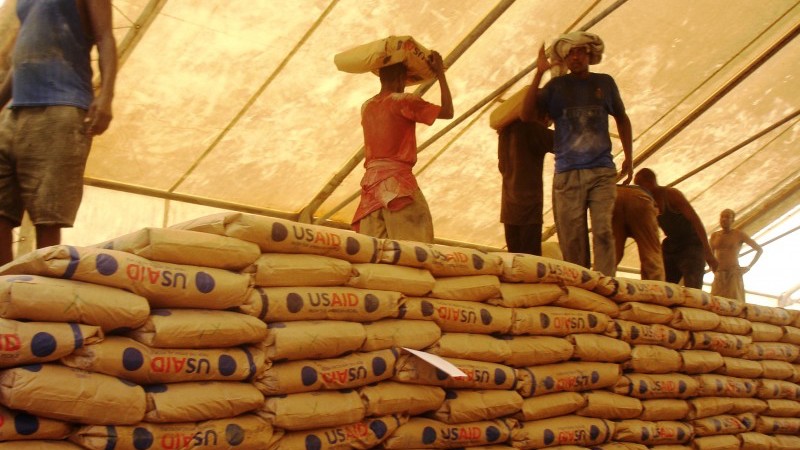 US food aid delivered to Kenya during the 2011 - a crisis set to be exceeded this year if predictions from the country's Met Office are accurate. (Photo: USAID Africa Bureau)

By Hadra Ahmed in Nairobi

The Kenyan Met Office warned on Thursday the current drought will surpass the disastrous event of 2011, with rains predicted to fail across much of the country during the next three months.

According to Unicef, the number of people in need of humanitarian assistance dramatically doubled from 1.3 million in August 2016 to 2.6 million in February. This number is expected to rise to four million people by April – surpassing any drought event since the turn of the century.

“For the areas that are highly impacted by this drought, for the forecast of March-April-May, we can see depressed rainfall on these parts of the country. So we expect that this drought is going to worsen going forward,” Joyce Kimutai, climate scientist at the Kenya Meteorological Department told a gathering of government and international aid representatives on Thursday morning.

The 2011 East African drought was the worst in more than 50 years. But Kimutai said: “For the southeastern parts of the country, this drought is [already] worse than 2011.”

Kenya receives the majority of its rainfall during two periods: the “long rains” from March to May and the “short rains” from October to December.

Kimutai said up until now, the drought has affected as many people as the 2011 drought. But if this year’s March rains fail as forecast, the disaster will be “more extreme”. 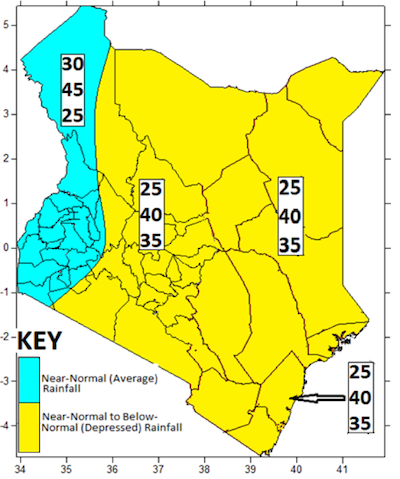 This year’s depressed rainfall rides on the back of an already pronounced, year-long drought in 2016. Analysis released on Thursday by the World Weather Attribution (WWA) network – which searches for human fingerprints on individual weather events – found the drought of the past year had been exacerbated by human-induced climate change.

Scientists found that the lack of rainfall was not linked to warming, but higher temperatures experienced in parts of the country that were hardest hit by drought had been made worse by climate change.

Friederike Otto, a scientist at the WWA, told Climate Home: “If the temperatures are higher there is more evaporation and the soils dry quicker. But this is not true everywhere because when the soil is dry there is no more water to evaporate. However because of analysis by the Famine Early Warning Systems Network we know that in some provinces this effect exacerbated the 2016 drought.”

Temperature increase due to climate change can lead to a stress on water supply and livestock. In order to reduce future impacts of climate change this remains a priority in disaster management and agriculture planning, according to Kenyan government.

“The soil moisture content is going to be very low and hence will continue to 2018. The rains that started today are not going to solve this situation. The water that comes finds a soil that is desolate. As it rains it just sweeps everything away”, said professor Shem Wandiga, director of the climate change institute at the University of Nairobi.

“I think we are looking at something more extreme [than 2011]”, Peter Macharia, assistant director of the Met Office said.

The WWA said the major driver of the drought in 2016 was the El Niño-La Nina cycle – a global weather phenomenon that begins in the Pacific Ocean. La Nina, a cooler phase, causes drying over East Africa.

In 2016, this caused reduced crop production, poor rangeland conditions in pastoral areas and food insecurity. Unicef said maize production in the coastal areas has decreased by 99% compared to the long term average. People have been forced to travel three times further to access water. Pastoralist communities in arid and semi-arid lands counties are losing livestock – with reports of large numbers of animal deaths.

The Kenyan government has allocated $103m to tackle the drought. The Red Cross has appealed for a further $9m to relieve the situation.