Unfinished business: Coal miners across South Africa walk away from clean up 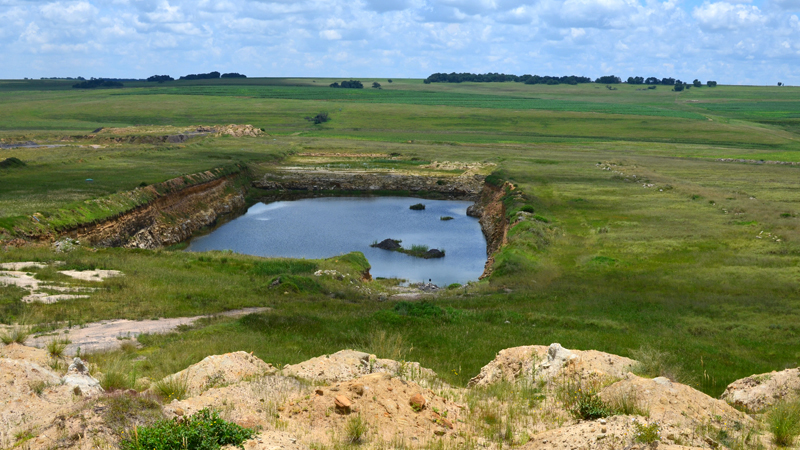 By Mark Olalde in Ermelo

­Just outside the town of Ermelo in Mpumalanga – South Africa’s most important coal mining province – Johan Vos’ farm is littered with derelict and working mines.

At one abandoned site, mining infrastructure sits partially submerged and rusting in a large pool formed among exposed mine waste. Smoke pours from a nearby hill as a fire rages out-of-control in the tunnels below.

The wreckage belongs to Golfview Mining (Pty) Ltd, part of Anker Coal and Mineral Holdings South Africa (Pty) Ltd, which in turn is part of the Anker group based in the Netherlands. But rather than finish cleaning up Vos’ land, Golfview is looking to sell.

Sights like this are increasingly common in South Africa. As the global market for coal slowly declines, slimmer margins are forcing international mining companies, including majors BHP Billiton and Anglo American, to shed their coal assets.

Documents obtained from the country’s Department of Mineral Resources (DMR) by Climate Home reveal a small minority of mining companies hold the majority of the country’s funds for rehabilitation. However, these big miners rarely apply for, and are almost never granted, closure certificates, the documents needed to legally close a mine and pass remaining liability to the government. Instead, junior miners, such as Golfview, are left with the remnants of mines and insufficient funds to properly clean up when the resource is exhausted. 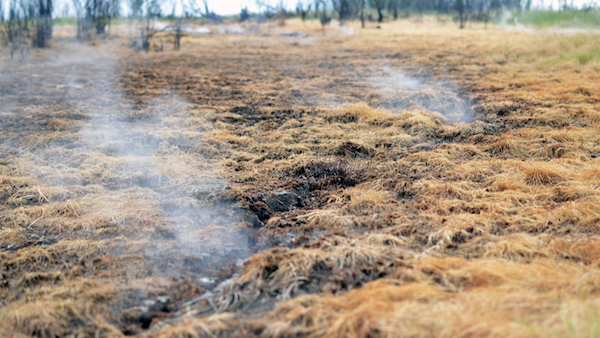 The ground near the Golfview mine cracks and smokes from a fire burning uncontrollably in a mine tunnel below. (Photo: Mark Olalde)

Proper rehabilitation of mines includes backfilling and sealing old shafts, halting the release of carbon dioxide, methane and other greenhouse gases. If miners simply walk away, said David Hallowes, a coal researcher at the South African non-profit groundWork, “you’ve just got a total catastrophe in the making”.

A decade ago, six companies mined 90% of the coal sold in South Africa. The eight largest mines produced more than 60% of total output.

Since then, shifting commodities prices, competition with renewables and conflict with Eskom – the continent’s largest electricity producer – have prompted a cascade of mine sales to progressively smaller companies.

Between 2006 and 2016, the number of operational coal mines in South Africa increased from 93 to 148, a 59% jump. However, coal production only increased by about 10%, indicating a shift to smaller mines.

In May 2015, BHP completed a demerger in which it spun off many of its assets perceived as being lower value, including South African coal, to South32. BHP did not respond to requests for comment.

At Golfview’s mines near Ermelo, operations ceased after the price of coal steadily declined for several years, and the company is looking to sell its mining rights and related liability.

In 2012, the company accepted a plea agreement and fine for environmental transgressions while mining in 2009 and 2010. Golfview since entered business rescue, similar to bankruptcy, and, according to Vos, stopped paying for the use of his land as well as the subcontractors who did the actual mining. Now, illegal miners are the only ones still digging coal from the mine. 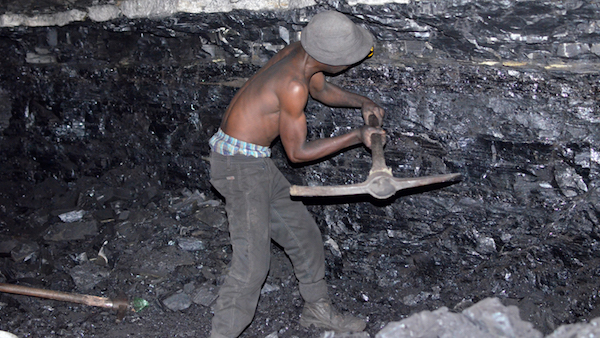 A small-scale miner illegally mines in an underground portion of the abandoned Golfview mine.
(Photo: Mark Olalde)

In South Africa, Eskom calls on its coal suppliers to be 51% black-owned, a standard smaller companies are finding much easier to meet than international mining houses.

Anglo American sent a statement to Climate Home in which company spokespeople said that Anglo “initiated a process to exit its Eskom-tied mines”.

“Anglo American has been steadily upgrading its portfolio since 2013 by disposing of lower margin, shorter life assets, while bringing on stream higher margin, long life projects. This took place through 2014, 2015 and 2016 and has continued in the first few months of 2017,” the statement said.

This raises the prospect, said Hallowes, that an industrial crisis could become an environmental one. “As you go to smaller and smaller mines and less capitalized firms, the ability to do [rehabilitation] is heavily eroded.”

South Africa has progressive environmental legislation meant to safeguard against future impacts of mining. Before a company can break ground, it must put up financial provisions for mine closure in the form of trust funds, cash guarantees or bank guarantees. Similar to a security deposit on a rented apartment, these provisions cannot be used by the companies to rehabilitate, but the money is returned if closure is completed properly. If not, the government has the right to appropriate the money and use it for rehabilitation. 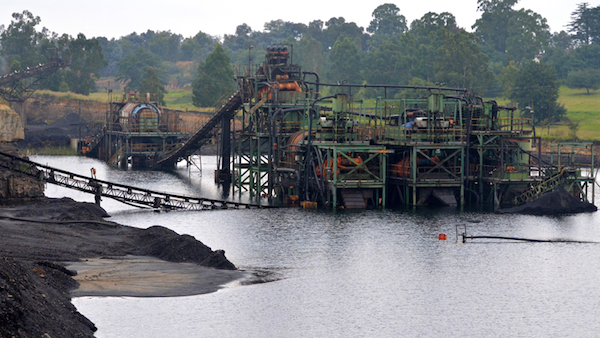 While the DMR said in a statement that it had dipped into financial provisions to rehabilitate, it did not provide examples.

DMR records, collected by Climate Home, reveal these funds are rarely disbursed, as closure certificates are infrequently issued. The records suggest no large coal mines have been officially closed since at least 2011.

When large companies, such as BHP and Anglo, did apply for and were granted closure certificates, the certificates were for prospecting rights, which cover a less-invasive search for minerals.

“Once a mine has been officially closed, the liability of that mine goes to the DMR and that is not a liability they want, so they are extremely reluctant to put an official stamp on closing mines,” Hallowes said.

The government said that whether funds are handed over during the sale of a mine depends on the terms of individual sales. The DMR said in a statement: “The department’s role is to ensure that the state is not exposed to the risk of inheriting environmental liability in the long run.” Anglo American said it always transfers its financial provisions when selling mines.

With the government focused on avoiding liability, big miners are turning to smaller companies to purchase their operations and work them until closure or abandonment. While the break up and sale of mines slowly advances across the country, the majority of funds for rehabilitation remain held by large mining houses.

Small mines usually have insufficient provisions for clean up. Records from KwaZulu-Natal, a province with a number of coal mines, show 95% of mines are covered by just 20% of all funds held for rehabilitation. This leaves them with an average clean up provision of $18,365 per mine. A prospecting right for coal in Ekurhuleni, the eastern suburbs of Johannesburg, held just $28 for rehabilitation.

On and around Vos’ farm in Mpumalanga, Golfview’s business rescue plan shows that rehabilitation is estimated at slightly more than $2.2 million, but only $385,000 is available in trust funds. The business rescue practitioner did not respond to requests for comment, although the plan calls for the sale of assets and parts of the mining rights. 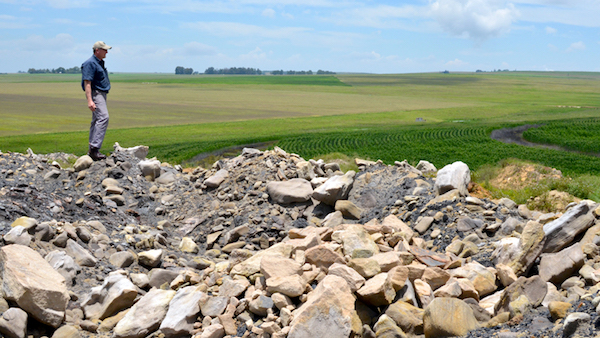 Johan Vos stands atop a pile of waste from an abandoned coal mine on his property and surveys his surrounding farm. (Photo: Mark Olalde)

Sonita Kruger is the safety, security, health and environmental logistics manager at Anker Coal. She said part of the company’s operation was rehabilitated while another section was 80% completed before the landowner began denying the company access.

“We did do a closure cost assessment of Golfview, we did, and we did a comprehensive rehabilitation plan, which was submitted to the DMR. There are funds available to do the rehabilitation,” Kruger said.

The plan states that the business rescue practitioner, employees and creditors will be the first to receive a cut of proceeds. Liabilities are listed at nearly $48m, meaning much of that would need to be paid before additional funds could be directed toward rehabilitation.

“Yeah, they’re going to give you a couple bucks, but it’s not enough because that piece of land is going to be sterilised for a hundred years, maybe more,” Vos said.

With little hope of large portions of his farm being economically viable again, Vos considered selling. Potential buyers were not interested in land marked by the remnants of coal mining. “My hands are chopped off. I can do nothing,” Vos said.

Mark Olalde’s work in South Africa is financially supported by the Fund for Investigative Journalism, the Pulitzer Centre on Crisis Reporting and the Fund for Environmental Journalism.