The IEA and IRENA issued separate press releases for their joint report, reflecting a gulf in expectations on the relative roles of renewables, nuclear and carbon capture 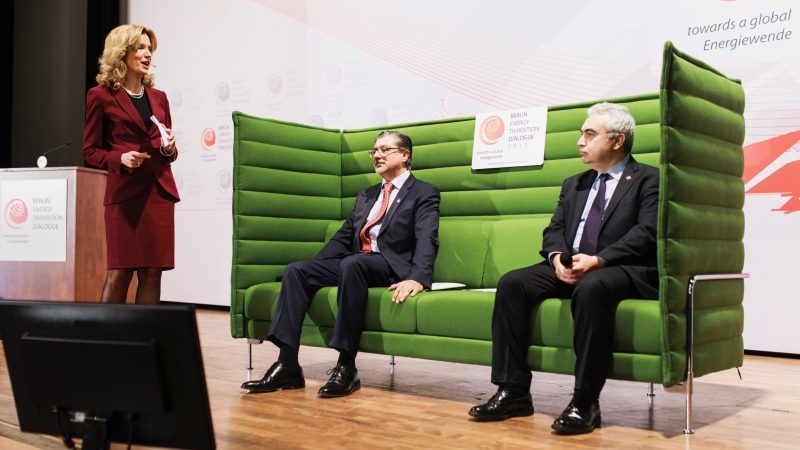 One report, two press releases. The world’s leading renewables and energy security analysts sent out mixed messages at a major conference in Berlin on Monday.

The German government had asked the two agencies to collaborate on a study of the investment needed by 2050 to clean up the energy mix in line with the Paris climate deal. This would inform discussions at the G20, where the host is keeping climate cooperation on the agenda in the face of renewed US hostility.

IRENA and the IEA agreed on a carbon budget, the level of emissions consistent with a 66% chance of holding global warming below 2C. But they disagreed on on methods, assumptions and priorities – reflected in a refusal to make a joint statement. “IRENA and the IEA are not best friends for a variety of reasons,” said a source close to the process.

IRENA, with its mandate to promote solar, wind, bioenergy and other clean sources, majored on renewables and energy efficiency. The IEA, an institution primarily concerned with energy security, favoured a “technology neutral” model that spit out large scale nuclear power and carbon capture and storage.

When asked, officials played down the differences. “The big picture shows it is feasible to achieve a big transition in the energy sector,” said Henning Wuester, policy director at IRENA, at a press briefing. “There are details that are different. They represent different views that are out there, but I think that makes it more interesting, because we see there are different perspectives that reach the same goals in the end.”

A key message was that the costs of overhauling the way we get light, heat and motion are not prohibitive: an extra 0.3% of global GDP in 2050 under the IEA analysis and 0.4% according to IRENA – with net benefits in terms of employment and economic growth.

From the IEA, which has repeatedly underestimated the growth of wind and solar power, it represents a less sceptical stance than previously. “Renewables are becoming more and more attractive,” said chief executive Fatih Birol.

Either scenario would require countries to go further than the targets they submitted towards the Paris Agreement. But campaigners said they did not reflect the pact’s ambition of holding temperature rise “well below 2C” or to 1.5C if possible.

The report is “an improvement” on other studies from non-civil society institutions, said Stephan Singer of Climate Action Network International. “It is not a business-as-usual scenario, it is ambitious, but not as ambitious as it needs to be.”

Bill Hare, a climate scientist and advocate for a 1.5C warming limit, said energy sector emissions should be close to zero in 2050, not just cut by 70% as in the report. “The consequence on policy is that particularly for electricity and transport, deep decarbonisation is too slow.”

It remains to be seen what influence the assessment will have on the G20. At a finance ministers’ meeting last week, the group of major economies ditched a commitment from the previous year to mobilise climate funds for developing countries – reportedly under US pressure. Reference to phasing out “inefficient” fossil fuel subsidies stayed in, albeit with no agreement on an end date.

In his first budget, US president Donald Trump proposed to axe spending on climate programmes at home and abroad. Experts warned this would damage international cooperation.