Norway has some of the most ambitious emissions policies in the world, but is opening oil fields that cannot pay back in a safe climate future, says SEI’s Peter Erickson 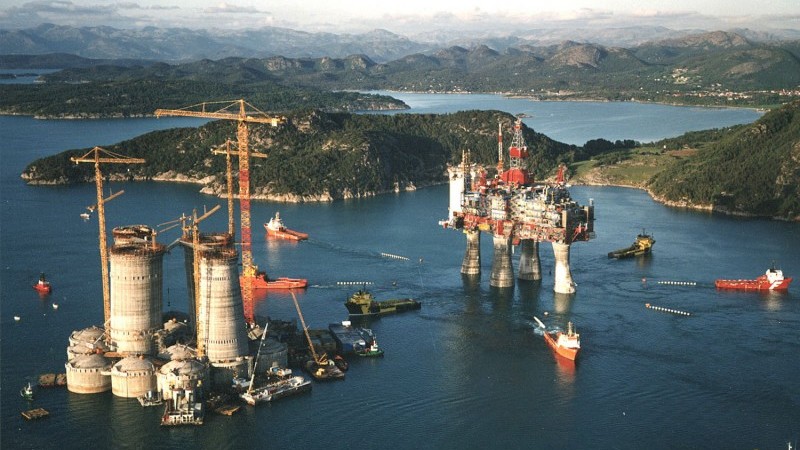 Norway's economic reliance on oil is at odds with its green image (Pic: Statoil)

Energy planners are in the middle of a major debate about the future of the world oil market. One of the most urgent topics is about when and whether oil prices – which dropped by nearly half in 2014 – will recover. Many have put faith in the decision by the Organization of Petroleum Exporting States (OPEC) to attempt to regain price control through supply cuts.

But those cuts have yet to have much effect. Brent crude prices are about exactly where they were a year ago – around US$50 per barrel. In the meantime, oil investment and profits are down.

In the longer term, future oil prices will depend less on OPEC behaviour than on global oil demand. Oil investors use demand forecasts to guide capital investments, not just to respond to expected to growth but to make up for depletion of existing fields. But oil demand is now facing large uncertainties, including two unprecedented challenges. Could the surge in electric vehicle sales lead to oil demand peaking much sooner than expected? And the will Paris Agreement, which strengthened the global climate goal to keep warming “well below 2C”, lead to policies and investments that further erode the market for oil?

The debate over future oil demand is especially relevant for Norway. The oil and gas sector accounts for about one-fifth of Norway’s GDP, and two-thirds of its exports. How the future oil market evolves may have profound consequences for Norway’s economy and communities.

Norway is also unique for another reason: it has among the most ambitious commitments to reduce greenhouse gas emissions. The country has committed to reduce domestic GHG emissions by at least 40% from 1990 levels by 2030, and to become a carbon-neutral “low emissions society” by 2050.

These conflicting goals – to maintain oil supply to feed the economy, while reducing fossil fuel use –  make Norway a prime example of “carbon entanglement.” This is a condition that, in the words of Angel Gurría, Secretary-General of the Organisation for Economic Co-operation and Development (OECD), applies to governments that “on behalf of their citizens have major stakes in bringing fossil fuel to market and taking their share of the rents,” even as they have committed to a low-carbon society.

The challenge for Norway is now whether and how to confront this entanglement. Achieving a climate-safe world, where warming is kept “well below 2C”, will require oil demand to fall, perhaps by 30% from current levels by 2040 (more thereafter). But a falling oil demand also means a corresponding decline in oil production. What might this mean for Norway’s own oil investment strategy?

Analysis presented in a new SEI discussion brief shows that a global oil demand consistent with the “well below 2C” target could be met largely with already-producing sources of oil through 2050, including virtually all fields already producing in Norway.

Some new oil would likely be needed, but many sources exist throughout the world that could provide that new oil at lower cost than Norway’s yet-to-be-tapped resources. Very little new oil from Norway would appear to “fit” within an oil budget consistent with the “well below 2C” target, at least based on oil field economics alone (see figure). 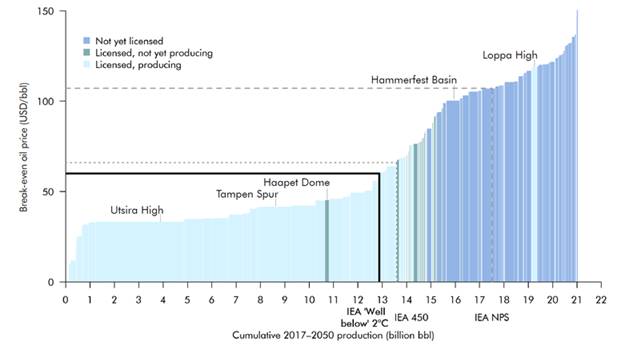 The Norwegian Petroleum Directorate is evaluating whether to open up new offshore areas for licensing. But does it make sense for the country to keep investing in new oil if it is committed to the goals of the Paris Agreement?

In a recent interview, Statoil’s chief economist, Eirik Wærness, nicely articulated the challenge. “How are players going to react in a situation where topline demand starts to fall? When do you stop investing? When do you start investing quickly to rapidly empty the resources that you have, if you are a country like Norway?”

Norway is at a crossroads. Its relatively high-cost resources may not be competitive in a low-carbon future with reduced oil demand, and while oil production is a large part of the economy, poorer and less-developed countries arguably have a greater need for oil revenues.

So the Norwegian government needs to decide: Has the time come to slow or stop investment in new oil fields? Or should the country race to exploit its resources before ambitious climate change mitigation policies are widely adopted? If political leaders are serious about their Paris pledges, they may want to conduct their own version of the analysis we just completed, and articulate for themselves what new oil resources might pass a “climate test”.

Peter Erickson is a senior scientist at the Stockholm Environment Institute, based in Seattle. He is co-author of the analysis discussed above, Norwegian oil production and keeping global warming ‘well below 2C’.