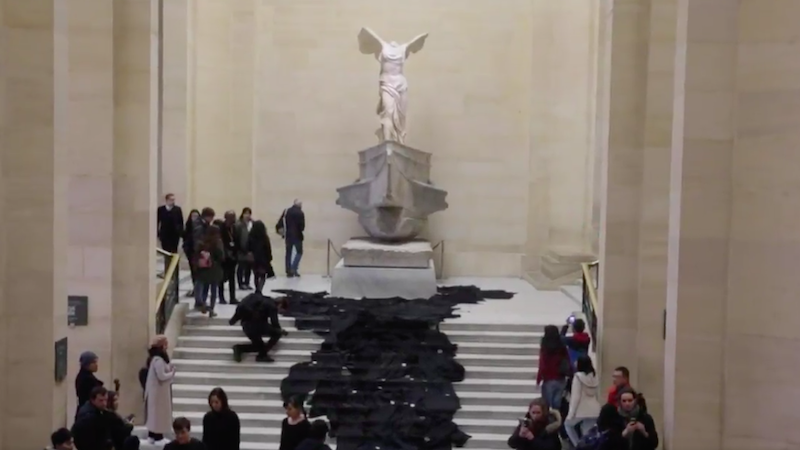 The Winged Victory of Samothrace, one of the Louvre's most prized sculptures, was the centrepiece of an anti-oil protest on Sunday. (Screengrab: AFP)

Fossil fuel divestment activists staged an oil slick pouring down the steps of the Louvre’s iconic Winged Victory statue in Paris on Sunday.

The protest was directed against the Louvre’s sponsorship deal with French supermajor oil company Total.

Roughly two dozen activists from the group Libérons le Louvre (LlL) silently crowded around the statue wearing black cloaks, which they removed and laid along the stairs. The symbolic river of oil stretched out from the prow of the stone ship on which the statue stands.

They reportedly handed out leaflets that read: “Total supports the Louvre / The Louvre supports Total – #zerofossile.”

The campaign group 350.org, which is part of the LlL coalition, released a statement that said: “Through its partnership with Total the Louvre Museum lends legitimacy to Total’s rogue business model. Like other fossil fuel companies, Total relies on public acceptance to continue its destructive activities. That is precisely why they strike sponsorship deals with cultural institutions.”

No details were provided by the group or visible on the Louvre’s website regarding the nature or size of the sponsorship. The Louvre and Total’s press offices have been contacted for comment.

Museums and art institutions in the UK, including the Tate and Tate Modern, have been subject to a sustained campaign from art activists Art not Oil. In 2016, a 26-year relationship between the Tate and BP was ended after a long campaign by activists.

That group also staged a protest in the Louvre during the Paris climate talks in 2015. Ten people were arrested.