“We are broadly in the right starting position to keep warming below 2C,” but most models require carbon capture to meet the Paris goal, researchers say 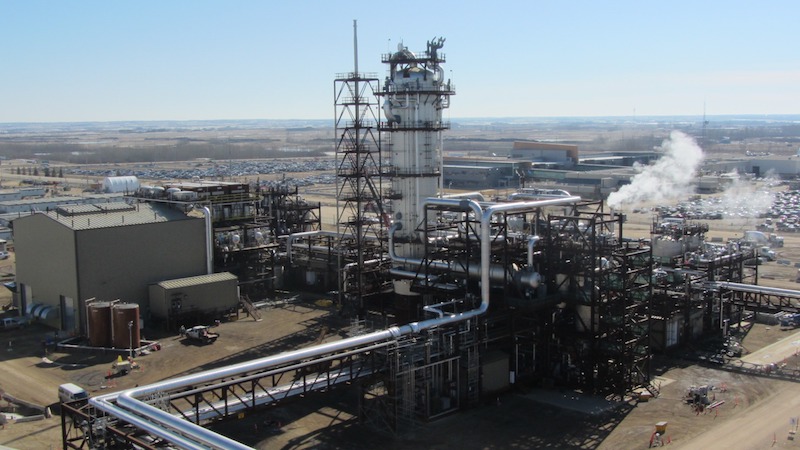 A carbon capture and storage facility in Alberta, Canada, where the technology is used to assist in oil exploration. (Photo: Ramsey Martin)

By Pep Canadell, Corinne Le Quéré and Glen Peters in The Conversation

Last year we found that the growth in global fossil fuel emissions have stalled over the past three years. But does this mean we are on track to keep global warming below 2C, as agreed under the 2015 Paris Agreement?

In our study, published in the journal Nature Climate Change today, we looked at how global and national energy sectors are progressing towards global climate targets.

We found that we can still keep global warming below 2C largely thanks to increasing use of clean energy, a global decline in coal use, improvements in energy efficiency, and a consequent stalling of emissions from fossil fuels over the past three years.

Nations need to accelerate deployment of existing technologies to lock in and build on the gains of the last three years. More challenging, is the needed investment to develop new technologies and behaviours necessary to get to net-zero global emissions by mid-century.

We looked at several key measures, including carbon emissions from fossil fuels, the carbon intensity of the energy system (how much carbon is produced for each unit of energy) and the amount of carbon emitted to produce one dollar of wealth.

The world share of energy from fossil fuels is starting to decline. There has been no growth in coal consumption and strong growth in energy from wind, biomass, solar and hydro power. The emerging trend is therefore towards lower carbon emissions from energy production.

Energy efficiency has also improved globally in recent years, reversing the trends of the 2000s. These improvements are reducing the amount of carbon emissions to produce new wealth.

From all these changes, global fossil fuel emissions have not grown over the past three years. Remarkably, this has occurred while the global economy has continued to grow.

As the global economy grows, it is using less energy to produce each unit of wealth as economies become more efficient and shift towards services.

These promising results show that, globally, we are broadly in the right starting position to keep warming below 2C.

But modelling suggests that stringent climate policy will only slightly accelerate this historical trend of improvements in energy intensity. And to keep warming below 2C will require deep and sustained reductions in the carbon intensity of how energy is produced.

Looking at the carbon intensity of energy (how much carbon is produced for each unit of energy) shows that current emissions (black line) are in the right spot to keep warming below 2℃ (blue, red and yellow lines). However we’ll need much more work to close the mitigation gap (brown line). (Photo: Peters et al 2016)

We also looked at the countries that will have the greatest global impact.

The slowdown in global emissions in the past three years is due in large part to the reduced growth in coal consumption in China. Fossil fuel emissions in China grew at 10% per year over most of the 2000s, but have not grown since 2013. This signals a possible peak in emissions more than a decade earlier than predicted.

China is showing a significant decline in the share of fossil fuels in its energy sector. This has been driven by the decline in coal and the growth of renewable energies. The carbon intensity of fossil fuels has also been falling, for instance by burning coal more efficiently.

The United States has also reduced emissions in the last decade, with significant declines in coal consumption, particularly in the last few years. These declines have several causes, including a weaker economy in the last decade and continued improvements in energy efficiency, which have led to lower energy demand.

Emissions in the US have further declined due to a decline in carbon intensity of fossil fuels driven by the shift from coal to natural gas and the growth in renewables.

Emissions have declined in the European Union for several decades, most notably in the past 10 years as a weaker economy, along with continual improvements in energy efficiency, has led to declines in emissions. These declines are speeding up with the growing share of renewables in the energy sector.

There is one big “but” in our analysis. We found that current fossil fuel trends are consistent with keeping warming below 2C because the future climate scenarios we use – assessed by the Intergovernmental Panel on Climate Change – allow for relatively large amounts of fossil fuels use in the future.

These scenarios assume that large amounts of the carbon emissions from the combustion of fossil fuels will be removed using carbon capture and storage (CCS).

CCS is also widely used together with bioenergy to produce a technology that in effect removes carbon dioxide from the atmosphere. In this process, plants remove carbon dioxide from the atmosphere, burning these plants produces bioenergy, and the resulting CO₂ emissions are captured and stored underground. The plants grow again and the cycle is repeated.

Most scenarios rely on large-scale deployment of CCS, in the order of thousands of CCS facilities by 2030, to keep warming under 2C. At present, just a few tens of facilities are being planned. There is also a lack of commitment to CCS in most pledges under the Paris Agreement for 2030.

Although many of the current indicators are consistent with limiting warming to 2C, there is now an urgent need for deployment of CCS to avoid the divergence from those pathways. That is unless technological alternatives can be deployed to cover the mitigation gap that is quickly emerging.

Many emissions scenarios also include removing large amounts of CO₂ from the atmosphere. Although bioenergy with CCS is the preferred technology in those scenarios, there is an equally urgent need to invest in the research and development of alternative negative emission technologies, potentially with a smaller environmental footprint.

It is significant that emissions growth has slowed in the last three years. This is necessary to move onto an emission pathway consistent with keeping global average temperatures below 2C above pre-industrial levels.

The short-term challenge is to lock in this slowdown from declining coal use, switching coal for gas, and the increasing share of clean energy. This will reduce the risk of emissions rebounding if the global economy grows more strongly in the short term.

However, our research shows that for emissions to move onto a downward trend at the required speed will require emission reductions in a broader range of sectors and more rapid deployment of existing low-carbon technologies.

Ultimately, reaching zero emissions this century will require a rapid program of research and development to support a wide range of low-carbon technologies, including systems to remove carbon dioxide from the atmosphere.

Pep Canadell, CSIRO scientist and executive director of the Global Carbon Project, Professor Corinne Le Quéré is from the Tyndall Centre for Climate Change Research, University of East Anglia, and Glen Peters is a senior researcher at the Center for International Climate and Environment Research – Oslo