President hails Kigali deal as “good for our people, the planet, and the profits of those that follow in our footsteps” 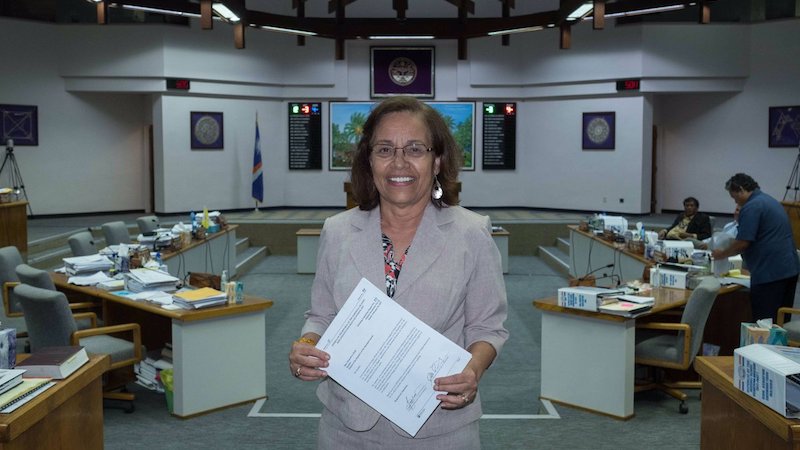 Marshallese president Hilda Heine in the Nitijela (parliament) after the vote to approve the amendment. (Photo: Hilda Heine)

The Pacific atolls of the Marshall Islands became the first country to ratify a global agreement to slash use of hydrofluorocarbons (HFCs).

The Kigali amendment to the Montreal Protocol was struck last year and aims to reduce the use of HFCs by 80% over the next 30 years.

HFCs are a significant greenhouse gas commonly emitted by refrigerators and air conditioners. The UN’s environment programme estimates the amendment could reduce global warming at the end of this century by up to 0.5C.

The president of the Marshall Islands Hilda Heine joined Twitter on Tuesday to delightedly announce her parliament had become the first on earth to formally approve the amendment.

Joining @Twitter to boost our fight for #climate action. Proud my country is first to ratify #KigaliAmendment today! https://t.co/Giaaclc3r3 pic.twitter.com/cbsw4BA5ZT

The low-lying atolls of the Marshall Islands are particularly susceptible to sea-level rise and drought.

“My country will not survive without urgent action to cut emissions by every country and every sector of our economies, including HFCs,” said Heine. “Our rapid ratification of the Kigali Amendment is yet another demonstration of our commitment to the Paris Agreement. We now need others to quickly do the same in order to help keep global temperature increases within 1.5C. This deal is good for our people, the planet, and the profits of those that follow in our footsteps.”

The country’s foreign minister John Silk said he would be depositing the ratification at the UN in New York at the soonest possible moment.

After the 1989 Montreal Protocol agreed to reduce emissions that deplete the ozone layer, HFCs became a prominent alternative in the manufacturing of cooling appliances. However their unintended greenhouse effect lead to the proposal of an amendment to the treaty by the Federated States of Micronesia and Mauritius in 2009. Alternative technologies already exist at relatively low cost.

Silk paid tribute to those islands that had lead the fight against HFCs.

“The world owes a great debt to the Federated States of Micronesia in particular for their tireless leadership in securing this amendment, beginning with their first submission in 2009. This amendment is one of the best examples of island leadership that we have seen,” he said.