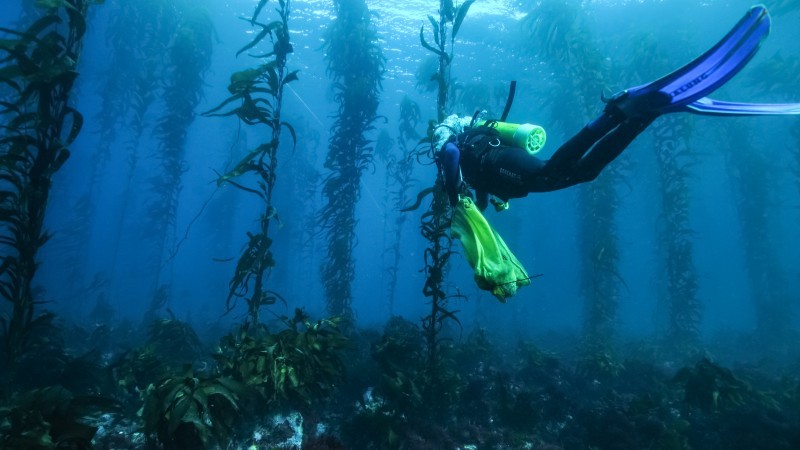 Giant kelp forests can grow up to 45m tall, but scientists have told senators that it will not survive into next century at current rates of warming. (Photo: Emma Flukes)

Seaweeds, invertebrates, fish and giant, ethereal kelp jungles are among a group of more than one hundred species that are being driven towards extinction by warming waters around Tasmania, an Australian senate inquiry has heard.

Neville Barrett, a research fellow at the Institute for Marine and Antarctic Studies in Hobart, where the hearing was held, told the Environment and Communications References Committee that the waters around Tasmania were a global hotspot for warming.

“I mentioned that there were 100 or more species in general of kelps and endemic fishes and things that will probably disappear over the coming century, certainly by the turn of the next century under the current bottom end of predictions of climate change,” he told Climate Home after his appearance.

“There’s a whole lot of species on the southern end of Australia that are as far south as they can currently go and some of them are already pushed to their upper thermal limit, as far as summer temperatures will go.”

Beyond Tasmania, there is no major landmass until Antarctica, meaning many species have “nowhere else to go”, said Barrett.

One such species is the giant kelp, Macrocystis pyrifera, the last stands of which Climate Home reported had been lost from Tasmania’s east coast in 2016. 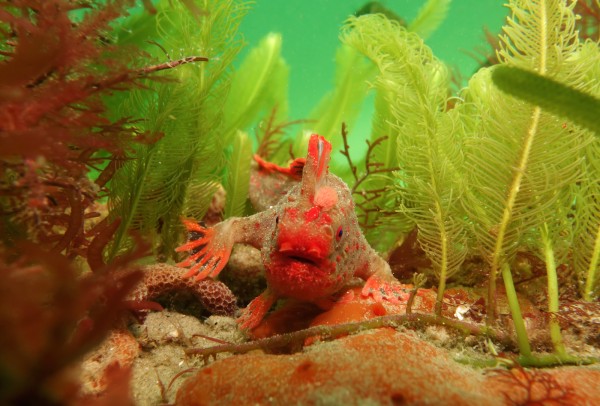 The critically endangered red handfish (Thymichthys politus) is endemic to southeastern Australia. Barrett said it was unlikely to survive beyond this century (Photo: Emma Flukes)

Many species have proven unable to withstand the changes, abandoning the warming east and clinging to the cooler waters around the island’s south coast. But even these were projected to become too warm for many species in future, said Barrett.

On top of the roughly 100 identified and well-understood organisms Barrett said would be forced out, there were an uncounted number of smaller or poorly-documented species that face the same fate.

“There’s a whole plethora of other things that we don’t even know that we’ve got yet, or sponges and things that are very un-described. We certainly will lose quite a lot of those, potentially, but we really don’t know enough about them to make predictions at this stage,” said Barrett.

Greens senator and committee chair Peter Whish-Wilson said the evidence he had heard was “more confronting that I was expecting”.

He said the debate happening in Australia over energy security, which has seen the conservative government call for clean energy funding to be directed towards what it calls “clean coal”, was “phoney”.

“All the while climate change continues to impact negatively on our daily lives,” said Whish-Wilson. “If we don’t cut emissions faster than we are doing now then the ocean ecosystems that we rely upon for food and jobs will continue to suffer. Tasmania’s waters are the canary in the coal mine because subtropical warm waters are being pushed South into sub-Antarctic cold waters, but if we keep going as we are then everywhere will be worse off.”

Climate Home contacted government senator Jonathon Duniam, who was also sitting on the committee in Hobart, but he did not respond by the time of publication.

Fishing industry body Austral Fisheries also gave evidence at the inquiry. In their submission, delivered by CEO David Carter, the group said the changes in the marine environment due to climate change were “a critical priority, if not the highest priority, for our business”.

Austral Fisheries said fishermen around the country had been affected by changing climate conditions: from rainfall reductions in northern Australia that have impacted prawn stocks, to high temperatures in the sub-Antarctic that have hit toothfish fisheries, to record-breaking summers in Tasmania that decimated the oyster industry.

The group called for coordinated and well-funded scientific tracking of climate changes in the oceans around Australia.