When the US last tried to kill the UN climate talks

Buoyed by a climate-hostile Congress, George W Bush set out to kill the UN climate talks stone dead. Despite his (and the oil industry’s) best efforts, a knockout proved elusive 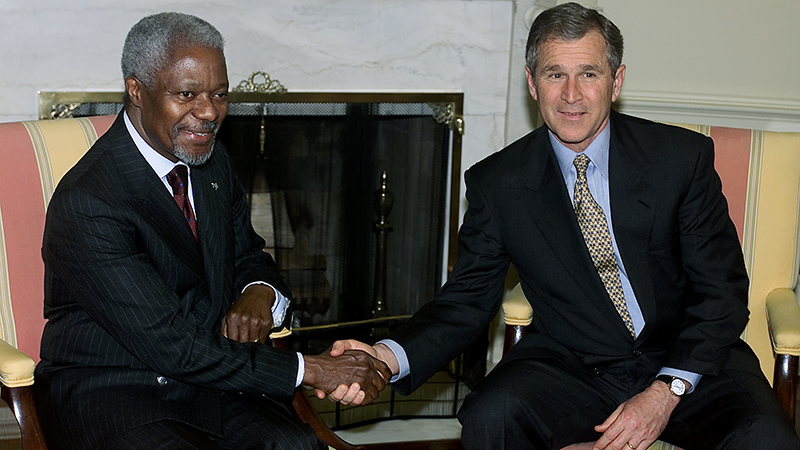 Amid the hysteria over Donald Trump’s impending inauguration, it’s useful to note the US has elected a climate-busting president once before.

The similarities are instructive, offering a sense of what Trump might do once in office and how the world could respond. An oil-friendly Texan, George W Bush was never going to be a massive fan of a UN climate treaty.

So it proved with the Kyoto Protocol, the 1997 UN deal that committed developed countries to greenhouse gas cuts but let off developing nations. President Bill Clinton hailed the deal “economically sound” but his successor (and the majority of lawmakers in Congress) disagreed.

Like Trump, Bush talked tough. He found a Republican caucus in Congress and a vice president in Dick Cheney itching to nix the KP and open the door for more fossil fuel exploitation.

Joanna Depledge, a former UN climate official and managing editor of the journal Climate Policy took up the story in a paper published in 2005.

During the presidential campaign, Bush had indicated he thought carbon dioxide should be treated as a pollutant, a stance supported by his pick for environment chief Christine Whitman. That was dropped soon after his inauguration.

“The ﬁrst signs came in mid-March 2001, when, in a letter to Republican senators, President Bush announced that his campaign promise to control CO2 emissions had been a ‘mistake’ and that he did not support the Kyoto Protocol targets. A couple of weeks later, the US administration conﬁrmed that it had ‘no interest in implementing’ the Kyoto Protocol and that it was, therefore, ‘dead’.”

Republican heartlands loved it, but the international community was affronted, with the EU, Sweden and France among those who strongly condemned the decision.

“There was no sense, for example, that President Bush had been briefed on the cataclysmic impact his outright rejection of the Kyoto Protocol would have on the rest of the world, including close US allies such as the EU and Japan, and therefore the need for considered diplomacy in announcing it.”

Bush and his allies were shocked by the hostility of countries to the decision, which Whitman later described as “flipping the bird” at the world.

As Trump says he would “cancel” the Paris Agreement, so Bush and Cheney thought they could kill KP.

“The US administration had truly assumed that, once the US withdrew, the Kyoto Protocol process would collapse, either because action on climate change without US participation was unthinkable, or because countries that had been publicly supporting the Kyoto Protocol were doing so disingenuously, and would be gratefully relieved at the opportunity to reveal their true opposition to the treaty and follow the US lead in rejecting it.”

Instead – on a diplomatic level at least – the reverse happened.

“Instead of burying the Kyoto Protocol, the US announcement had the opposite effect, galvanizing the rest of the world into a much more positive and conciliatory negotiating attitude. The newly found resolve of the international community, minus the US, was pivotal to enabling adoption of the Bonn Agreements at the resumed session of COP 6 in July 2001, and subsequently the Marrakesh Accords at COP 7 in November later that same year.”

Still, the pullout did have consequences. Canada, Japan and Russia later abandoned the deal.

Yet the view of the US as “virtuous superpower” persists – take Trump’s comments on NATO as one example. And it perhaps explains why the Bush White House felt so relaxed about its decision.

“The approach of the Bush administration is underpinned by a realist view of the world, whereby the US, as unchallenged superpower, feels little need to involve itself in long-term multilateral ventures that might constrain its activities, and conversely feels it can pursue its foreign policy objectives with or without the support of others.

“The ﬂaws of this approach, however, have become apparent, including with respect to the climate change regime; the Kyoto Protocol will now enter into force without the US, leaving the US and US businesses on the sidelines of important economic and political developments.”

The key role played by president Barack Obama’s administration in developing the Paris Agreement, the KP’s successor is now well known and chronicled here in a series of features by my colleague Megan Darby.

Yet without leadership in the White House, the mid-2000s saw a mixture of business and civil society fill the void, allied with a growing and vocal number of lawmakers on Capitol Hill, wrote Depledge.

“The domestic changes gradually unfolding in the US, however, are positive signs. Given its strong tradition of democracy, inﬂuence of interest groups, and pluralistic government structure, change in the US only comes slowly. However, when it comes, it is much more likely to be durable and sustainable if comes from the bottom up.”

That business voice is now much stronger than in the early 2000s; witness the 630 major businesses who published an open letter to Trump at the start of 2017 urging him to maintain US climate leadership.

See too this week’s interventions from leaders in China, India and Saudi Arabia emphasising their commitment to tackling greenhouse gas emissions and invest in green energy.

Trump can slow progress, but like Bush, he will likely find that killing global efforts to tackle climate change are beyond his powers.