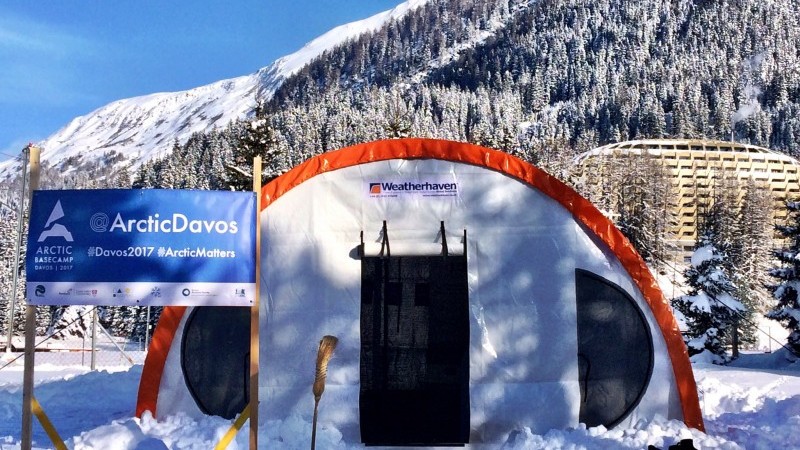 Talks on the future of a warming Arctic are taking place in tents outside the main Davos conference (Pic: Twitter/Christiana Figures)

In the Swiss mountain resort of Davos, temperatures plummeted to -24C last night.

That’s harsh weather for camping, even if you’re used to it – like the intrepid Arctic researchers who have pitched their tents on the fringes of the World Economic Forum.

They held a parallel science conference on Wednesday to bring home the reality of rapidly melting ice caps to the global power players gathered here.

“I spend a lot of time researching in these kind of tents in the Arctic,” Jeremy Wilkinson of the British Antarctic Survey told the BBC. “But it’s getting much more tricky to set these tents up because the ice is getting much thinner.”

‘I want to cry seeing the ice melting but we will change a sad story into science-based action.’ Peter Bakker @MPB_WBCSD #wef17 @ArcticDavos

“The Arctic plays such an important role in the global climate system that the risks that come from the Arctic don’t stay in the Arctic. The risks for the rest of the world are potentially very costly.”

Farmers, insurers and infrastructure businesses should beware of weather extremes that are linked to changes at the north pole, Whiteman said.

As one of the organisers, she was “overwhelmed and delighted” with the level of interest. They are hoping to set up a global platform to look at the issues in more depth – and come up with solutions.

The former US vice president and UN climate chief needed no convincing that greenhouse gases must be phased out to save what’s left of the Arctic ice.

The #ArcticMatters. To save the ice caps, we must bend the curve of emissions by 2020 #WEF17

A short walk away at the International Davos hotel, sponsors of the main conference include BP, Lukoil and Chevron, who see opportunities in the thawing northern ocean.

Last month, the US and Canada declared a ban on oil drilling in their sections of the polar region, citing climate concerns.

It makes no sense to develop these frontier resources, argued President Barack Obama, when the world needs to move away from fossil fuels.

Russia’s share remains open for business, though, while green groups are suing Norway’s government in an attempt to block further exploration.

“It’s incredibly ironic that fossil fuel use is of course driving emissions, which are driving ice melt, and that is opening up the Arctic to more extraction,” said Whiteman. “My personal opinion is: keep it in the ground in the Arctic.”