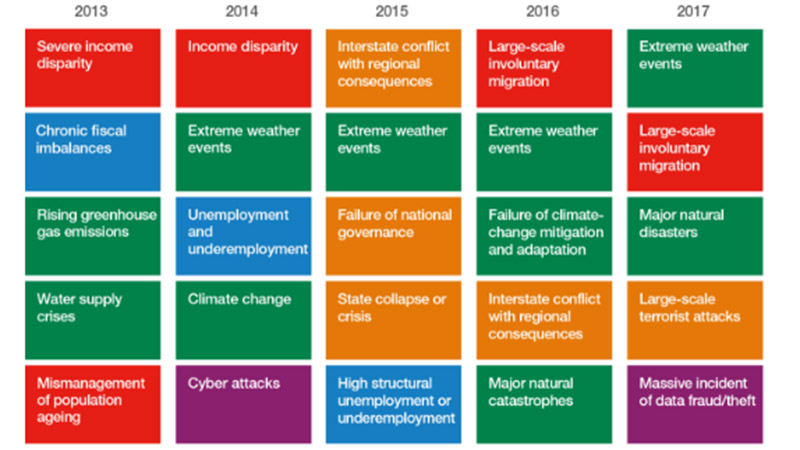 For the first time in the Global Risk Report's history, extreme weather events are the most likely threat to the world's economy (Pic: WEF)

Its annual Global Risks Report lists extreme weather, water shortages, natural disasters and a failure to prepare for climate change as four of the top five perils of 2017 in terms of impact.

“Weapons of mass destruction” topped the list – a nod to rising tensions on the Korean peninsula and fast-cooling relations between Russia and Europe.

Despite agreement on a  UN climate pact in 2015, the “pace of change is not fast enough” said the report, released every year ahead of the two-day World Economic Forum in Davos, Switzerland.

What is the WEF?
It’s an annual talking-shop for 3,000 delegates who include world leaders, business executives and the media to discuss how the global economy is shaping up. Held in a swanky skiing resort, it’s famous for its parties, huge egos and conspicuous wealth on show. But it does attract big hitters: this year China’s president Xi Jinping, US vice president Joe Biden, secretary of state John Kerry and a member of the Trump transition team will attend.

Changing weather patterns and a lack of access to clean water could “trigger or exacerbate societal risks such as domestic or regional conflict and involuntary migration,” it added.

“The World Bank forecasts that water stress could cause extreme societal stress in regions such as the Middle East and the Sahel, where the economic impact of water scarcity could put at risk 6% of GDP by 2050.

“The Bank also forecasts that water availability in cities could decline by as much as two thirds by 2050, as a result of climate change and competition from energy generation and agriculture.”

Underlining fears that climate change is already impacting countries, the report said global impacts from extreme weather are more likely than those from migration, terrorism or data theft.

And it pointed to legal action in the US, UK and Netherlands as evidence of a threat to governments who do not appreciate the risks linked to environmental degradation.

“With power and influence increasingly distributed, however, there is a growing recognition that the response to environmental risks cannot be delivered by international agencies and governments alone.

“It requires new approaches that take a wider ‘systems view’ of the interconnected challenges, and that involve a larger and more diverse set of actors.”