The COP22 summit was dominated by Donald Trump’s shock election win, but amid the gloom there were kernels of progress says St Lucia minister 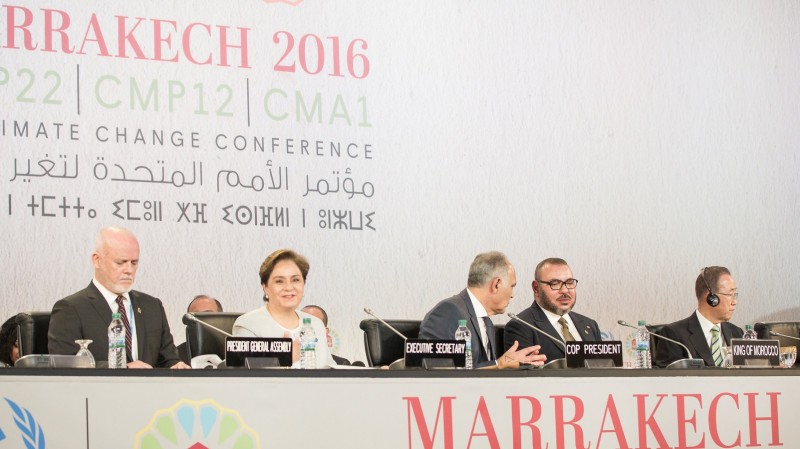 We might not look back at the Marrakech climate conference and say it was a resounding success.

By far the most significant circumstance that shaped the talks was the early entry into force of the Paris Agreement, which happened in less than a year since its adoption.

And not just by scraping across the double threshold of 55 countries and 55 percent global emissions but well and truly vaulting over it, with 100 ratifications covering nearly 70 precent of global emissions by the start of the conference.

This caught many by surprise, which also meant that the envisioned preparatory work was simply not done.

While it would have been good if early entry into force stayed as the main focus, the Trump victory had a dampening effect on the climate talks.

But it was a temporary effect because it also prompted a show of conviction of the entire world of the necessity and urgency of climate action; that no matter what Trump says, the coalition of countries – over 100 governments committed to doing something about climate change – is much bigger than the U.S.

The Marrakech talks certainly haven’t taken us off course in implementing the Paris Agreement and, in modest ways, they have set the stage for 2017.

Marrakech COP22 will be remembered for the fact that it convened the first Conference of the Parties to the Paris Agreement (CMA).

It decided that we will finalise the rules for implementing the Agreement by 2018. It also set out how we start preparing for the 2018 Facilitative Dialogue – the next major political moment when the UNFCCC evaluates the aggregate emissions reduction pledges in relation to the 1.5°C limit in the Paris Agreement, supported by IPCC’s Special Report on 1.5C.

Now we have to keep the momentum and it’s extremely important that we do so in 2017. We need to be even more ambitious in our mitigation efforts to be in line with the 1.5C limit – one of the key small island demands.

To underpin this, we need to see more mobilisation of climate finance and more rapid deployment of renewable energy solutions right across the globe.

These two issues which are of utmost concert to small island developing states – climate finance and increased ambition to reduce greenhouse gas emissions – will also be at the centre of the next climate summit, hosted in Bonn under a Fijian presidency.

Small islands and other vulnerable countries believe that the split between climate finance for mitigation and adaptation should be fifty-fifty.

The effects of climate change are hitting us fast and furious and we are under increasing pressure to make our economies, infrastructure, agriculture and the water sector more climate resilient. To achieve this, we need to see improved access of developing countries to climate finance.

Although the amount of money we need to spend now seems large, it pales in comparison with what we will need to spend in the future. We must recognise that the cost of inaction is monumental – just think of the refugee crisis we would have on our hands if we delay – millions of people across Africa, the Caribbean, Pacific and Asia who have to abandon their countries due to climate change.

Just this thought should be enough to mobilise climate action and start bending the greenhouse gas emissions curve downwards as soon as possible.

The urgency for climate action is not just science anymore, it’s what’s unfolding around us. Not just small islands are affected by climate change – everywhere we see drought, extreme weather events. These increasingly intense and wide-spread climate impacts should be the strongest clarion call to the global community that we need to take action to address climate change and it shouldn’t take more cataclysmic events to realise that.

There are a couple of factors that pose a risk to the implementation of the Paris Agreement. First, we have to assume that the new political situation in the U.S. will affect the climate negotiation process.

Not just philosophically, through the added boost to climate scepticism, but because historically the U.S. has provided significant financial support to the UNFCCC, the Intergovernmental Panel on Climate Change and the Green Climate Fund.

We hope that good sense prevails and here we find encouragement in some of the recent pleas made to president elect Trump from scientists and business leaders to continue with US leadership on climate action.

The other threat is that small island states could become despondent without adequate support to help us adapt to climate change. We SIDS left Paris believing for the first time that the world was finally listening to our concerns. Now we need to see further encouragement on the international level, with for example the GCF approving projects already in the pipeline.

Of course, we as SIDS also have to devote some our own severely limited resources to submitting projects to the GCF but we also need support with this process due to the significant institutional deficiencies in our countries.

We need also to start looking at how we can pool our resources and mobilise funding at the regional level. Islands across the Pacific, Caribbean and Indian Oceans face very similar issues, like climate impacts on water availability and agriculture, and require similar solutions.

We are optimistic that we can do something to protect our countries from climate change on the domestic level and that the international community will come good on its promise to provide climate finance, capacity building and technology transfer to help us achieve this.

Other encouraging signals come from the increasing commitment from non-state actors and sub-national governments to tackling climate change, which cannot only be left to climate change ministries and governments.

In the Caribbean, the only time we saw the entire community mobilised in calling for climate action was when we engaged with our non-state actors – the youth movement, journalists, artists, the private sector.

People are often sceptical of government and are more likely to identify with messages resulting from such coalitions.