US solar power smashes records in 2016 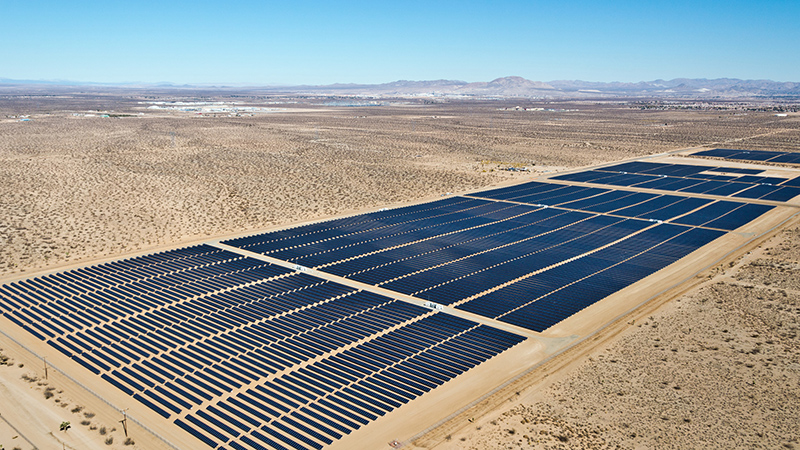 US solar power has just had its biggest quarter in history, and it’s about to get even bigger, according to a report released by the industry on Tuesday.

Between July and September of this year, 4.1GW of solar photovoltaic cells (PV) were installed in the US. That’s enough new power for one home every 11 seconds – using the Solar Energy Industries Association’s (SEIA) average figure that 1MW powers 164 homes on average.

The SEIA report, compiled by consultants at GTM Research, predicted that the last quarter of this year would be an even larger one for the industry with roughly 4.8GW scheduled to start producing energy before the year is out. This single quarter would exceed the amount of solar PV installed in all of 2015.

“It’s safe to say the state of the solar industry here in America is strong,” said Tom Kimbis, SEIA’s interim president. “The solar market now enjoys an economically-winning hand that pays off both financially and environmentally.”

Ironically, the numbers for the end of 2016 are buoyed by policy uncertainty. The boom was driven by growth in utility scale solar – 77% of new capacity was in the form of solar farms rather than household panels. 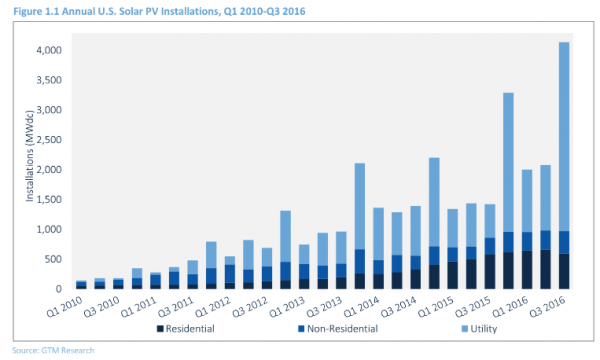 A glut of companies scheduled projects to come online at this time in order to beat the planned expiration of a tax credit for investors in renewable energy. Last year, Congress extended its life until 2021, but the projects were already on the way.

“The third quarter of 2016 represents the first phase of this massive wave of project completion – a trend that will continue well into the first half of 2017,” said Cory Honeyman, associate director of US solar at GTM Research.

Newly elected president Donald Trump has previously criticised solar for being “too expensive” and taking up to 30 years to pay back householders on their initial investments. This is not true, although Trump could significantly discourage investment in the technology if he convinced Congress to summarily end the tax credit scheme that has benefitted the industry.

Current vs potential rooftop solar capacity in US, according to @solarcity https://t.co/ETlAahCTRw pic.twitter.com/FNiqA1dcid

But the scheme also benefits business, meaning Trump may decide to keep it. Although he has promised to slash corporate taxes, which would in turn take away the incentive for companies to write off their tax through investments under the scheme.

The SEIA said it would not “comment on hypotheticals”.

In other parts of the solar market, things are more mixed for the industry as it faces the challenge of selling a product that doesn’t wear out. The largest market for solar is California, where growth rates are slowing down as finding households willing to go to solar has become increasingly difficult.

“GTM Research does not expect all of the above trends to be permanent problems,” said the report. “Rather, they are signs of a segment figuring out how to grow in a maturing customer environment.”

Read more on: Energy | Renewables | US | US solar Energy