Fire bombs: Hobart lies in the path of climate disaster

Around the world, communities are living obliviously close to climate-driven fire disaster. In the first in a series of reports, Karl Mathiesen visits Hobart, Tasmania 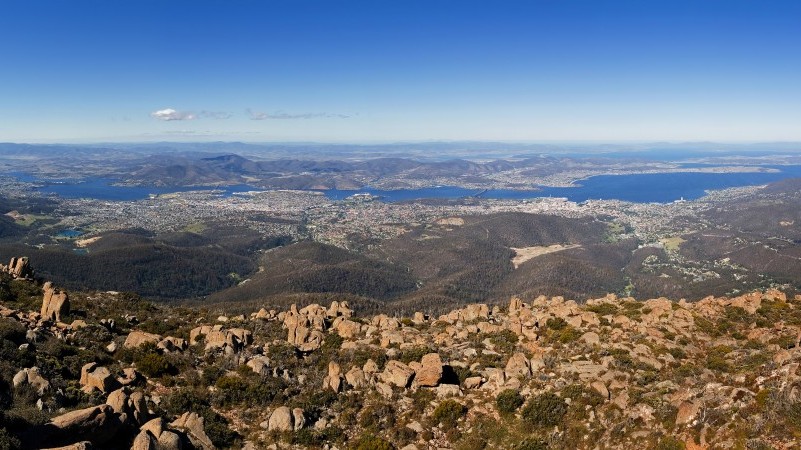 The surrounding hills of Hobart carry a fuel load that threatens to devastate the city (Source: Wikipedia/Commons)

By Karl Mathiesen in Hobart

Looking down on the Tasmanian capital of Hobart from Knocklofty – one of its surrounding hills – David Bowman describes a truly frightening scenario.

A hot, northerly gale and rolling fireball turn the forest around us into a blast furnace. The oil-filled eucalyptus canopies explode. One by one, the hills around the city catch alight. Then with a great sweep the fire runs up the slopes of Mount Wellington. Chunks of burning wood are flung into the air and rain down on the city. Office buildings, churches, schools and homes (perhaps the one I grew up in) randomly burn. In all, he says, four or five suburbs are destroyed.

That’s the catastrophe, Bowman says, that the residents of Hobart live blithely beside every summer. And the odds are steadily getting worse. Both on land, and in the atmosphere, humans are creating bigger and bigger problems for ourselves.

This Climate Home series will examine a dangerous trend in three distinct but related landscapes – Australia, western North America and the Mediterranean.

In each of these places, climate change adds what Bowman, a professor in fire ecology from the University of Tasmania, calls “the plus”: a dialling up of danger as weather patterns shift towards a more fire prone future.

He gazes down at Hobart, home to 200,000 people. “I’m horrified at the complete disaster about to unfold,” he says with the bluntness of someone who has given up trying to coax people into listening to him. He could be dismissed as an alarmist. Indeed, he says, he often is. But this cataclysm has happened before.

Almost fifty years ago, on 7 February 1967, a small spot fire in the northern suburbs of Hobart was grabbed by a brutal northerly and sent roaring towards the city.

It was the last day of school summer holidays. A teenaged Mark Nicholson (a friend of my family) was fishing with his grandfather in a clinker-built dingy on Cornelion Bay, a few kilometres from the city centre, when he felt the wind begin to strengthen. 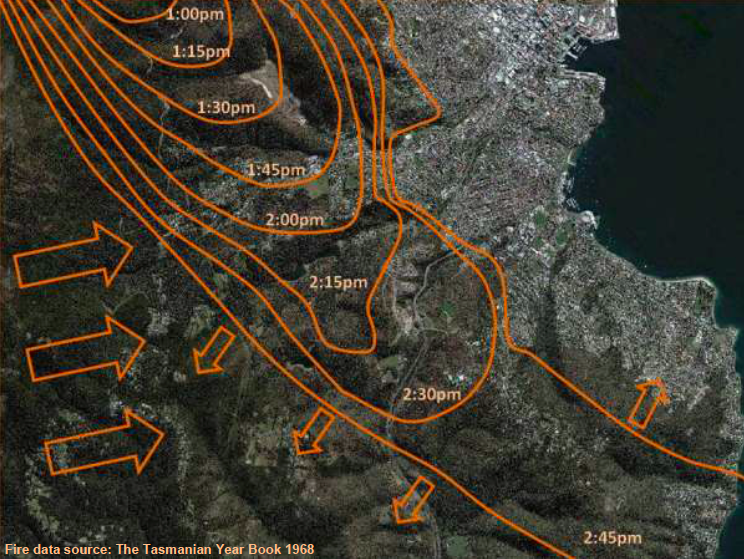 A rough estimate of scale puts the distance between the front at 1:30pm and 2:30pm at 6km. Source: Hobart City Council

“The wind just got harder and harder and hotter and hotter,” he recalls. “The wind was really hot and embers started to land in the bay. Then this fireball raced down through Lenah Valley and ended up setting fire to the Domain [the parkland beside the city centre]. Our house backed on to the Queens Domain so I wasn’t quite sure whether the house was still there.”

Powerless to row to shore against the wind, Nicholson and his grandfather had to tie up to a yacht to prevent being carried across the estuary. They sat and watched as the mountain exploded with flame. It was “terrifying”, he says.

On what became known as Black Tuesday, 62 lives were lost. In just five hours, 2,640 sq km of forest was burned; 1,293 homes were destroyed.

“The capital was a city of terror, with people standing in the streets openly weeping,” reported the Australian Shipress news. Random ember attack had turned suburban streets into a lottery. Grateful, unscathed looked out of their side windows at destituted neighbours. Nicholson’s house survived. 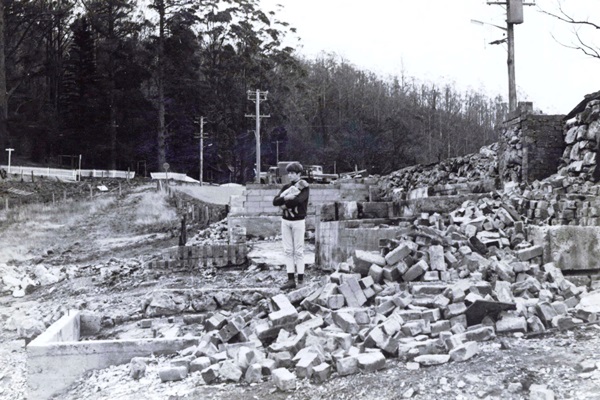 In the intervening half century, the city has stretched up its encircling hills, reaching further into the embrace of the forest.

“You can see why they want to do it,” says Bowman. “Wake up in the morning and listen to the birds. It’s marvellous… Culturally we are really decoupled, we want to have it all.” But he believes the piper must be paid.

The memory of Hobartians may have faded; but the land remembers. Behind the city, Mt Wellington looks down, a dominating presence like the famous Table Mountain of Cape Town. Today you can stand on a rocky outcrop and look over the white skeletons of the giants that burned fifty years ago. The young trees are still climbing at their navels.

But Bowman isn’t so much interested in the trees as what lies beneath. On Knocklofty, just behind the suburb in which my mother has her home, twisted thickets of tea tree, black wattle and native cherry make the forests impassable.

“City of Terror”, the Shipress News reports on the 1967 fires in Hobart. (Photo: Nigel Roberts)

It’s this incredible volume of fuel that haunts Bowman, whose own house is just 250 metres from the forest edge. When the fire comes, the undergrowth acts as a ladder for the fire to reach the explosive eucalyptus crowns. The forest, according to Bowman and other fire managers I spoke with, is as primed as it was in 1967.

Now add in the changes to southeastern Australia’s climate as the planet warms. There will be more big wet spells that promote growth, then droughts and heatwaves that make catastrophic fires like 1967 ever more likely. 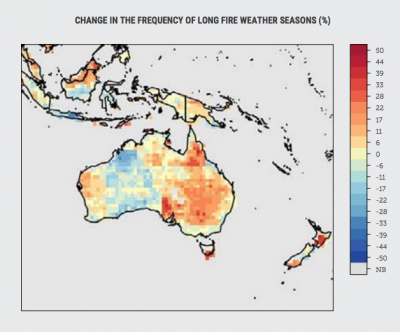 Because of the many complex causes of fire – including human population growth – identifying climate driven trends has been difficult. But one trend is clear and unequivocally linked to climate change. Globally, the length of the fire weather season increased by nearly 19% between 1979 and 2013. This has been particularly true in eastern Australia.

Just three years ago, less than an hour’s drive from Hobart, the small rural community of Dunalley was razed by a brutal fire.

“It could just as easily have been Hobart,” says Bowman. “We are not even dealing with the now. How do you deal with the plus?” In the face of this stacking of the climate dice, which will be resolved (or not) in boardrooms and fora far from the provincial green island of Tasmania, it is important to look at the things that can be controlled. This is the creed of what climate wonks call “adaptation”.

Bowman has a radical vision for Hobart’s adjustment to the new normal, but to understand it, he says, we need to walk further around Knocklofty.

On the eastern flank of the hill there is a city council interpretation sign that shows a painting by the colonial artist John Glover. The sign is placed where Glover sat at his easel in 1855. His painting depicts an expansive view of Hobart’s estuary, seen through some tall trees and an open wood.

Looking down the valley today, the difference is startling. No glimpse of Hobart can be seen. The valley is filled by a green wall of small trees and shrubs.

Australians wondering about the difference between 1.5C and 2C of warming? Here's what it means via @climateinstitut pic.twitter.com/bMVtE6GNSP

When Hobart was first settled, the woods were open and airy. This was the result of thousands of years of fire management by indigenous Tasmanians, says Andry Sculthorpe, an ecologist and member of the Tasmanian Aboriginal community. Regular burns diversified the hunting fodder and allowed for easy passage.

While much traditional Tasmanian knowledge was lost amid a particularly severe and brutal programme of colonial eradication, Sculthorpe says there are many clues that reveal the landscape created by his ancestors.

“Where we can see a lot of old campsites in the middle of dense scrub. Well, we can know that they weren’t sitting in the middle of impenetrable thickets in their camp, so that’s the indicator that the country was open,” he says.

Before Aborigines, there were other landscapers. Megafauna, such as the hulking Palorchestes azael – a tapir-like marsupial the length of a horse – crashed about flattening shrubs and mowing down the understory.

None of this means that there have not always been huge bushfires (the Australian term name for wildfires) in Tasmania. But as humans have disassociated from the landscape and left it to go wild, we’ve simply turned up the danger.

“There’s probably always going to be weather patterns where fire is going to be dangerous but I think the extent of damage that we’ll see, with the way the bush is at the moment and they way it was in ’67, is going to be a lot worse than if there had been previous fire management through the country,” says Sculthorpe. 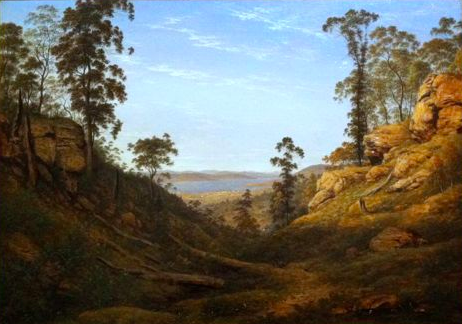 This breakdown of the human relationship with land and the inherent dangers are not native to Tasmania. Bowman lists off a range of other places – Sydney’s Blue Mountains and the Adelaide Hills in particular – where Australia’s cities are blundering their way into a burning building.

Given the headlong rush towards dangerous climate change humanity is currently engaged in, Bowman and Sculthorpe both advocate controlling the factors close to home. Hobart’s city council does conduct seasonal burning. But the walk I go on with Bowman reveals the inadequacy of the programme. The grasses and leaf litter are blackened and the occasional stump has been torched, but the medium-sized scrub, that ladder to the treetops, remains.

Bowman says the only way to defend against “the plus” is to transform the landscape. This, he says, would involve a drastic slashing of all undergrowth in a 500 metre perimeter around the city. A massive programme of biomass removal to create an open forest buffer around the city.

Bowman sighs when he looks at the Glover painting: “I love it”. The forest, he believes, should be engineered to resemble the painting and the ancestral memories of the Aborigines. He has met with opposition among environmentalists, who believe the forest should be left to its natural state.

“It’s natural in the sense that it will grow like that by itself,” says Sculthorpe. “But if you think about how the forests were under Aboriginal management then a lot of them are thicker now than what they were. So they do need a bit of care.”

The largest constraint on Bowman’s plan is that it would be hugely expensive – something Canadian forest managers will discuss in the next instalment of this series. The Hobart city council’s bushfire planning reports recognise that more needs to be done. Consequently the council is ramping up burning – which compels residents to complain about smoke pollution – and the creation of firebreaks.

But the investments are limited by a budget that general manager of the City of Hobart Nick Heath says is governed by people’s perception of risk – rather than reality.

“Risk level tolerance varies within and between communities and would be governed by a range of factors, including cost and willingness to pay in an environment of competing interests and not unlimited budget,” he says.

Bowman calls this inability to conceive of and respond appropriately to imminent danger “a disease. A sociological pathology. Can we cure ourselves in time?”

Bowman’s fire management strategy may sound severe, but it is considered the gold standard in another landscape that has seen its traditional owners forced off and danger creep in: British Colombia. BC’s fire prone communities will be next in our series.