World’s reefs in “uncharted territory”, say scientists, as bleaching set to hit reefs for an unprecedented third year in a row 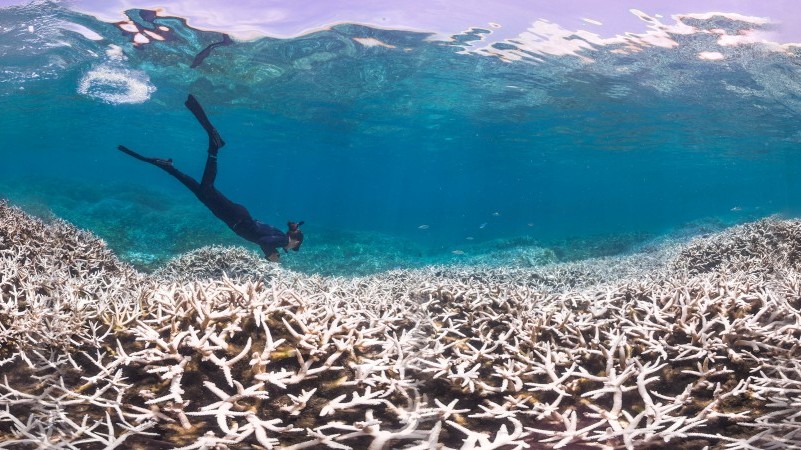 Bleaching in American Samoa during February 2015. The same reefs will be exposed to raised temperatures again in the coming months. Source: Caitlin Seaview Survey

The world’s longest-running coral bleaching event, which has destroyed huge areas of reef from Australia to the Caribbean, will continue into 2017.

The latest four-month forecast from the US National Oceanic and Atmospheric Administration’s (NOAA) Coral Reef Watch has raised alerts for reefs in the south Pacific and eastern Indian ocean into March next year.

The alert level is lower than in previous years, representing a slight cooling off as the world moves out of a very large El Niño (which raised global water temperatures and exacerbated the bleaching event) and into a La Nina phase.

But Dr Mark Eakin, the coordinator of NOAA Coral Reef Watch, said the lower levels of stress this year were still a concern. Reefs that have been exposed to repeated bleaching for two or three years are more fragile.

“So many corals are pre-stressed that this could be enough to push more over the edge,” said Eakin. He said the longer term outlook showed reefs in the Maldives could be hit again by April.

Bleaching occurs when corals are exposed to small but rapid increases in heat for a week or more. If the temperature does not return to normal with a few weeks, the corals can die off and be replaced by algae.

Global and repeated coral bleaching events are a new phenomenon, said Professor Nick Graham, a marine ecologist from Lancaster University. They are driven by the rise in ocean temperature from global warming.

“Previous bleaching events have tended to occur over one year [or] season for a given location,” said Graham.

“The 2015-2016 event has shocked many coral reef scientists, with lots of locations being bleached two years in a row. If this extends into 2017 for some locations, this really is uncharted territory. We know very little about how the reefs will respond to such repetitive thermal stress.”

Since late 2014 corals have been hit by elevated water temperatures in every major coral region of the world, often repeatedly. It is just the third time a bleaching event has extended across the globe. The previous worst was a 1998 event that lasted little more than a year and killed 16-19% of the world’s coral.

What is coral bleaching?

Corals are formed by an interaction between small animals (corals) and very tiny plants called zooxanthellae. Interactions between the two generate a reef’s brilliant colours.

For reasons not clearly understood, when water warms rapidly (even by a small amount like 1C) the zooxanthellae leave the corals, depriving them of their food source and colour. They turn bone white. If the heat persists for too long the coral will die.

Algae, which is usually cleaned off by the living corals can now grow, making it impossible for new colonies of coral and zooxanthellae to grow back even once the temperature drops. When this happens it takes decades for reefs to recover, if they ever do.

“It’s too early to say how much coral has been lost globally from the 2015-2016 bleaching, but it is safe to say it has been the worst on record, surpassing the losses documented from the 1998 event,” said Graham.

The advent of La Nina – even though it will bring some relief to the Pacific – carries further complications. It often brings very active cyclone seasons to the north east of Australia, where the Great Barrier Reef has just experienced its worst bleaching on record. These storms can do extensive damage to even healthy reefs.

“Cyclones break the coral structure down. The northern section of the Great Barrier Reef [on which two thirds of the coral has been killed] will be very vulnerable to extensive physical damage from cyclones in coming years,”  said Graham.

“Once the physical structure (i.e. the dead coral skeletons) is lost, there are dramatic declines in reef associated fish assemblages, and recovery of the reef becomes more challenging.”