Turkey: Notes from a state of (climatic) emergency

Coal-rich Turkey is straying further and further from the path of climate safety. Can it be convinced to come back to the fold? 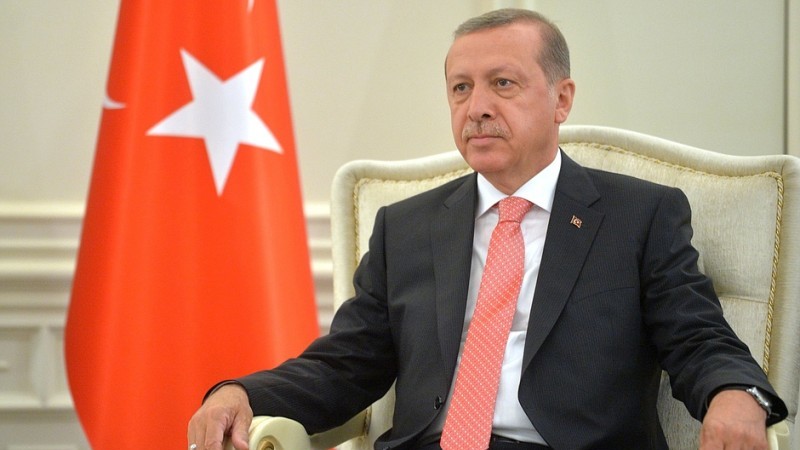 As COP22 unfolds this week in Marrakesh, Turkey is likely to be an emergent actor, particularly when it comes to topics like differentiation and access to climate finance.

The country’s climate change policies have long been defined by a politics of ‘special circumstances’. Given the botched coup attempt of 15th July and the consequent state of emergency declared in the country, one might correctly think that climate policies are not the main priority.

But a deeper look into regional geopolitics, recently passed governmental decrees providing legal backdoors to extractivism in the country and a coal rush with hefty incentives to domestic lignite make the case a significant one. In what follows, we look at some of these key issues and their potential impacts on Turkey’s positioning under the new institutional architecture of the climate regime.

Turkey’s Intended Nationally Determined Contribution (INDC) envisages up to 21% reduction in greenhouse gas emissions from the business as usual (BAU) level by 2030 with an implementation period that starts in 2021. Several studies conclude that this target is nowhere near being fair and adequate considering Turkey’s share in total global emissions (1.24%) and per capita emissions destined to outpace many giant economies such as the EU, USA and China (Figure 1). 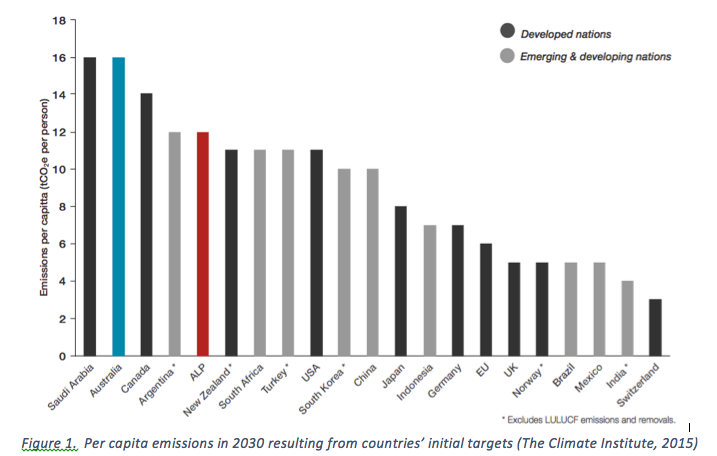 Turkey aims to use carbon markets to achieve this target, which may risk exporting some of its emissions to other developing countries. Instead, the country could easily adopt carbon-pricing measures that would reduce its projected emissions by 40% with respect to the baseline scenario that lies at the heart of its INDC.

It should also be noted that Turkey did not pledge any pre-2020 action. This is confusing as the country strives for hosting the climate summit in 2020 and does not show any ambition to undertake rapid climate action or foresee a peak of its emissions by 2030 in line with the best available climate science.

Moreover lack of attention to adaptation in Turkey’s INDC despite its location at the eastern end of highly vulnerable Mediterranean has also been criticised. A recent study already found that the “semi-arid and dry sub-humid continental central Anatolia climate characteristics expanded substantially” in the past 30 years thereby providing a significant precedent for future droughts.

One of the key arguments the Turkish negotiators often use is that the country needs climate finance from developed countries in order to raise its ambition level. The question is whether Turkey is already receiving substantial climate finance in order to realise its fair share or not? Well, yes and no.

In the last decade (particularly after the country made big steps towards energy sector privatisation), Turkey has become an attractive market for multilateral development banks, including the European Bank for Reconstruction and Development (EBRD) that has invested over €8 billion in the country through over 200 projects. Roughly half of these projects fall under renewable energy and energy efficiency themes.

Though most of these investments are provided to private sector in the form of concessional loans, equity investments or credit lines through intermediary finance institutions, the country’s renewable energy and energy efficiency targets will depend on the continuity of such funding flows.

In 2015, among more than 30 recipient countries, Turkey got the lions’ share (almost 20%) of total EBRD investments and reconfirmed its position as the top destination for the bank’s money. In addition to EBRD, the government of Turkey has been working closely with other multilateral development banks such as the International Bank for Reconstruction and Development and the International Finance Corporation in order to tap other sources of climate financing including the Clean Technology Fund.

Turkey was able to tap US$250m to scale up its mitigation measures through renewable energy efficiency projects. Turkey also accesses other forms of climate-related finance sources. According to the OECD climate-related development finance statistics in 2014, Turkey is among the top destinations for bilateral and multilateral finance. It receives as much financing as developing nations that already feel devastating impacts of climate change such as Indonesia and Bangladesh; and thereabouts as Uzbekistan, Philippines, Brazil, Vietnam, and Morocco (see Figure 2). Turkey also enjoys financing from bilateral or multilateral donors including Germany, Japan, European Union, France and Asian Development Bank (see Figure 3). 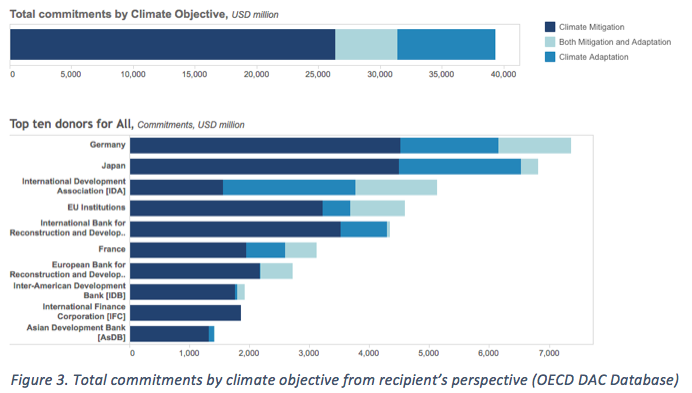 Another question that comes to mind is that whether Turkey uses its public incentives in line with the overall aim of the Paris Agreement: rapid transition to a low-carbon economy? According to a study of IISD, quantifiable subsidies to coal in 2013 make up almost 0.1% of Turkey’s nominal GDP. This was much before the recent amendment in energy package through which coal plants can enjoy lucrative incentives and exemptions from environmental regulations.

Furthermore, a governmental decree issued at the height of post-coup attempt (in its famous Article 80) provide exemptions from licences, permissions and appropriations to projects deemed as ‘strategic investments’, a vague concept which can easily be steered in any direction. In addition to these incentives which lock the country into a carbon-intensive future, we should also mention that climate-related development financing that Turkey gets through financial intermediaries can also be used for fossil fuel project financing.

For example, in 2011, a “highly-efficient” natural gas fired thermal power plant was financed through Private Climate Finance Support scheme. Potential public coal funding through financial intermediaries in Turkey between 2007-2014 could be major portion of up to US$8.6 billion. In fact, a recent analysis by Sevil Acar and Erinç Yeldan underlines that by removing the coal subsidisation scheme, Turkey can mitigate its greenhouse gases by as much as 5% without harming its economy. But it seems these findings do not resonate for the current government as they intend to full utilisation of domestic fossil fuel resources (mainly coal with low calorific value) of the country by 2023.

Whether Turkey will embrace the low carbon development opportunities after Paris or refrains from ratifying the Paris Agreement as much as possible thus repeating a historical mistake, we are yet to discover. However, there is one thing that seems certain for the country during and beyond COP22: a fair, balanced and equitable contribution to global efforts will require much progressive political will and a stronger commitment to international law.