Donald Trump is a disaster for the climate, but clever drafting of the UN pact will limit the damage, says Thomas Hale 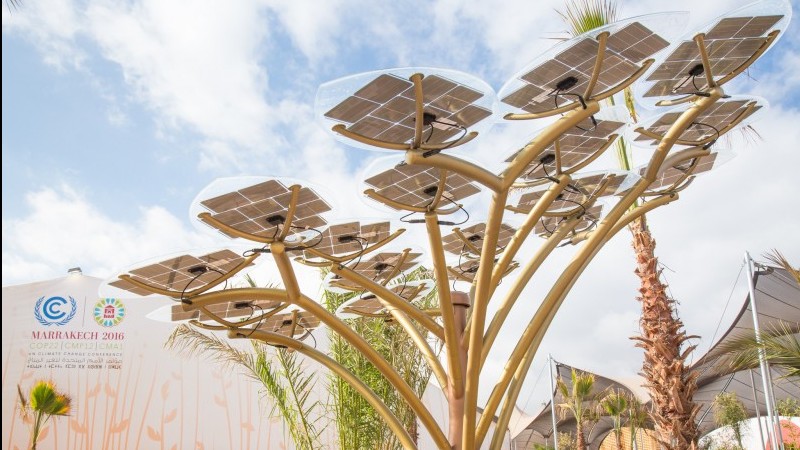 A solar power installation at the COP22 venue in Marrakech Pic: Flickr/UNclimatechange)

The election of Donald Trump as President of the United States is a disaster for our climate and everything under it.

But thanks to the Paris Agreement and the broader arrangements around it, the coming of Trump will not be as bad as it might have been.

The Paris system’s flexibility makes it resilient in ways more traditional international regimes (like trade agreements or NATO) will come to envy under President Trump.

First, there is the Paris Agreement itself, which entered into force last week. If Trump withdraws from it, as he has promised, it will take four year before the US actually leaves (or one year to leave the overarching UN climate convention). And, because of clever drafting that elides the US Senate, a new President could instantly re-ratify the Agreement after he or she comes into office.

Second, while it now unclear whether the second-largest emitter will be able to meet its climate target, much less ratchet it up, Paris gave us 189 other climate plans. Because these pledges are based in national priorities and interests, they are more likely to be implemented than a more traditional agreement that would require reciprocal concessions. Nothing about Donald Trump’s election reduces China’s or India’s need to clean up their air and build new industries based on next-generation technology.

Third, Trump’s election will not slow the groundswell of climate action we see from cities, states and provinces, businesses, civil society groups, and other actors whose decisions are not governed by the Electoral College. Indeed, the coming of Trump may even lead to an explosion of such actions in many parts of the US, which has more cities, businesses, and other sub- and non-state actors registered on the UNFCCC’s NAZCA portal than any other country. These efforts are being ramped up by the Global Climate Action Agenda that emerged from Paris, which creates a system to track and accelerate these “bottom up” actions. Those arrangements are being discussed and reinforced at COP22. According to UNEP, these non-party initiatives could reduce emissions as much as the national climate plans by 2030. That’s one ‘firewall’ that Trump won’t breach.

Finally, the Paris system has accelerated a number of background drivers that fundamentally change the costs and benefits of climate action in the real economy. Renewables are at parity with fossil fuels across much of the world, and dropping even further in price. Disclosure of climate risk is being mainstreamed by some of the largest institutional investors, hitting corporate directors in their share prices. Such economic transformations can re-write the conventional political wisdom. Indeed, renewables are expanding quickly in many US states that Donald Trump won.

We should not fool ourselves. Donald Trump will likely do enormous damage to our climate and much else. But the Paris system is strong because it is broad and flexible in ways that few international agreements can match. For that we should be grateful.

Thomas Hale is a professor of public policy at Oxford University