China leads the charge for emissions efficiency, but faster progress is needed to meet the Paris climate goals

The amount of carbon needed to power the global economy fell to record lows in 2015, as coal consumption in major economies plummeted.

This was more than double the average fall of 1.3% between 2000 and 2014, but far below the 6.5% required to stay within the 2C warming limit set by last year’s Paris agreement.

“What we’ve seen in 2014-15 is a real step change in decarbonisation,” said Jonathan Grant, PwC director of sustainability and climate change. 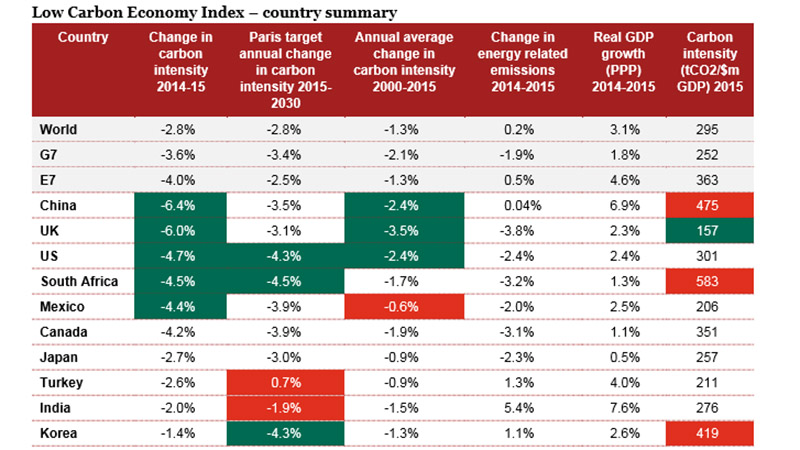 The result was just 0.1% lower than the previous year, but it occurred against the background of healthy growth, which usually spurs carbon emissions growth.

“There was fairly reasonable economic growth in 2015, which is why we think this result is quite significant,” said Grant.

The biggest driver was a decline in China’s coal consumption, which resulted a 6.4% drop the carbon intensity of the world’s second biggest economy.

A centrally-led shift of the economy to a service-based industry has begun to shut down the vast coal-fuelled steel and cement sectors. For the first time, China led the rankings table for the biggest drop in intensity.

The UK and US were also significant contributors, reducing by 6% and 4.7% respectively, to the overall drop as both governments introduced policies that pushed coal plants out of business. In the UK coal use dropped by 20% for the second year running. 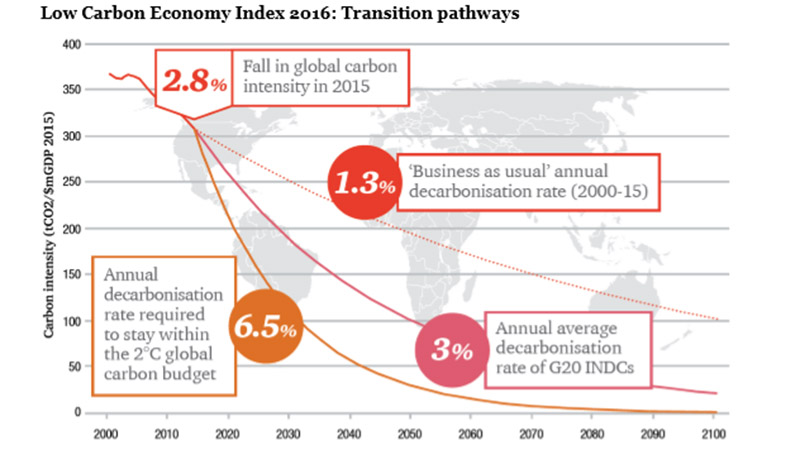 Richard Black, director of the Energy and Climate Intelligence Unit (ECIU), said: “In the week in which the Paris Agreement comes into force, this is very promising news in showing that the dominant paradigm of economic growth is swiftly changing, which makes the Paris targets look more achievable.

“This analysis shows once again that economic growth and carbon emissions are not inextricably linked… Climate science is unequivocal in showing that switching away from coal is an essential first step in keeping climate change within ‘safe’ limits.”

But Grant said coal represented the low-hanging fruit and that economies were enjoying the benefits of relatively painless early decarbonisation.

“Countries are focussing on decarbonising electricity. That means tackling coal power. I think it will get increasingly challenging. Coal is the easiest target for government policy,” he said.