Patricia Espinosa oozes positivity over the pace of climate diplomacy, but admits making the UN’s new emission cutting deal work will be a hard grind 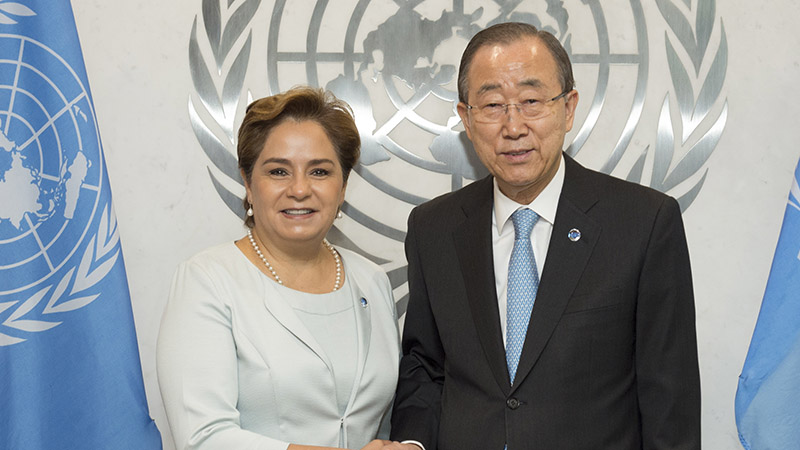 After the party comes the hangover. In the case of the UN’s new Paris climate agreement, that means two years of hard work to put into reality a fat wad of paper.

Given fast rising global temperatures and a report by the World Meteorological Organisation warning of a “new climate reality”, that’s hard for many to accept.

But Patricia Espinosa, who replaced Christiana Figueres as the UN’s top climate official over the summer, is keen to manage expectations.

“We are talking about a process that will require time to see an impact in the atmosphere,” she says in an interview exactly two weeks before the COP22 climate summit opens in Marrakech.

“It will be a challenge to communicate what is being done and what is happening.”

Mexico’s former foreign minister is no stranger to the UN process, having chaired the global negotiations in 2010 after the Copenhagen climate summit debacle.

The focus then was of inclusivity, building coalitions and listening to the concerns of countries big and small, a strategy that paid off and won Espinosa global praise for her handling of the meeting.

Now she has to achieve the impossible, and try and deliver on arguably the most ambitious piece of diplomacy the UN has witnessed, but one that still needs an incredible amount of work.

“This was one of the concerns and I was conscious coming into this job I would face enormous expectations after Paris Agreement,” she says.

“Now the agreement is entering into force I am aware of the need to deliver and show progress is even more urgent – but at same time we are seeing a lot of action.”

It’s her job to ooze positivity, but separate the rhetoric from the data and it’s not yet clear whether the Paris Agreement has tipped the scales in favour of renewables.

The latest report from the International Energy Agency boasted that 500 million solar panels were installed every day through 2015, with clean power capacity overtaking coal.

Optimists point to UN pacts to slow aviation emissions and curb the use of potent warming gases known as HFCs in the last month. Critics observe the Paris deal will still lead to 3C of warming.

Take for example CDP’s recent survey of 1,089 major companies: while 85% have climate policies, the vast majority are too weak to meet a UN goal to limit warming to below 2C.

Or look at EY’s October analysis of renewable deployment, which says governments in China, Chile, Germany and South Africa are not offering a policy environment conducive to faster growth.

“Transformation does not happen with one or two decisions,” argues Espinosa, who is looking for leaders at state, regional, city and company level. “Everyone has to participate. It is more complex.”

$100 billion roadmap: “I saw a very positive response from developing countries with the presentation – everyone welcomed the fact that developed countries took the initiative to work this out,” she says.

“I am sure there will be questions… and that is only natural because in terms of methodologies there can be only so many views but the fact itself it was presented was positive.”

Capacity-building in Africa: “We are trying to put in place some structure to support countries in development of NDCs and trying to identify with whom they can partner,” she says.

“We need to keep momentum and the sense of urgency about the actions but the truth is in these last few months many countries focused on ratification.”

Differentiation in MRV: “The quality and character of the [climate plans] presented is so diverse and it has to do with the diversity of realities on the ground,” she says.

“The Paris Agreement is focused on a country-specific approach. We need to focus on the actions on the ground, and it is still early to say.

“I can’t say [we will have] one single set of measures. Maybe some measures will be applicable to everybody but other may have different types of indicators?”

Trump: “You know I think everyone in world is following the election process… because of the implications… we are certainly very vigilant about it.

“I think that what is important to bear in mind that the Paris Agreement has an incredible amount of legitimacy… it is supported and a result not only of negotiation but in many ways the result of a broad movement that has taken place globally.”