Rampal coal plant poses a “serious threat” to a key ecosystem for Bengal tigers and must be cancelled, says the UN world heritage body 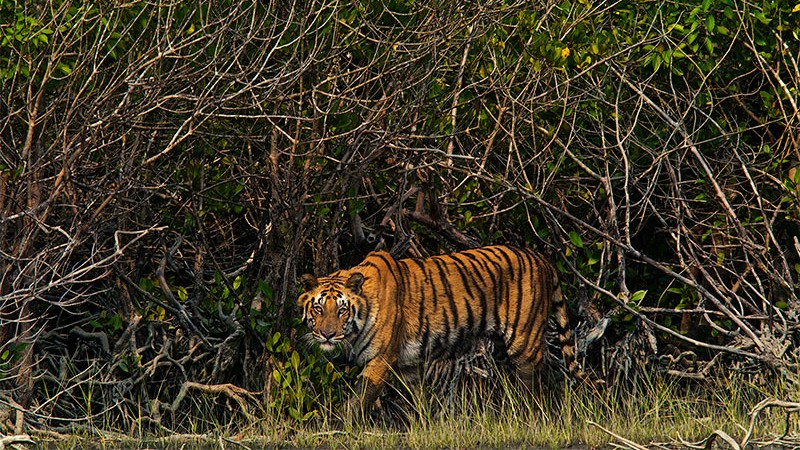 The Sundarbans mangroves provide a home for roughly one fifth of the world's remaining Bengal tigers. Photo: MN Gaurav/Commons

The UN’s world heritage body has made an urgent intervention to stop the construction of a coal power station in Bangladesh.

Unesco said the plant could damage the world heritage-listed Sundarbans mangrove forest, which houses up to 450 Bengal tigers.

A fact finding mission, published by Unesco and the International Union for the Conservation of Nature (IUCN) on Tuesday, found that the proposed site of the Rampal coal power plant, which is 65km north of the Sundarbans world heritage area, would expose the downriver forests to pollution and acid rain.

Ships carrying coal and other material for the plant’s functioning will move through the mangrove reserve, requiring dredging and dumping of 32.1 million cubic metres of river bottom at first and further annual dredging. This threatens the breeding grounds of the endangered Ganges and Irrawaddy river dolphins.

Fresh water supply to the mangroves, already stretched by agriculture, must not be placed under any more stress, the observers said.

Their report concluded that the power station posed “a serious threat to the site”.

“The mission recommends that the Rampal power plant project be cancelled and relocated to a more suitable location,” said a Unesco statement on Tuesday.

The statement also warned Bangladesh that the Sundarbans forest reserve would be considered for possible inscription on the list of world heritage in danger at the next meeting of the World Heritage Committee in 2017. This listing is used as a diplomatic stick for countries seen to be failing their commitment to protect world heritage sites. 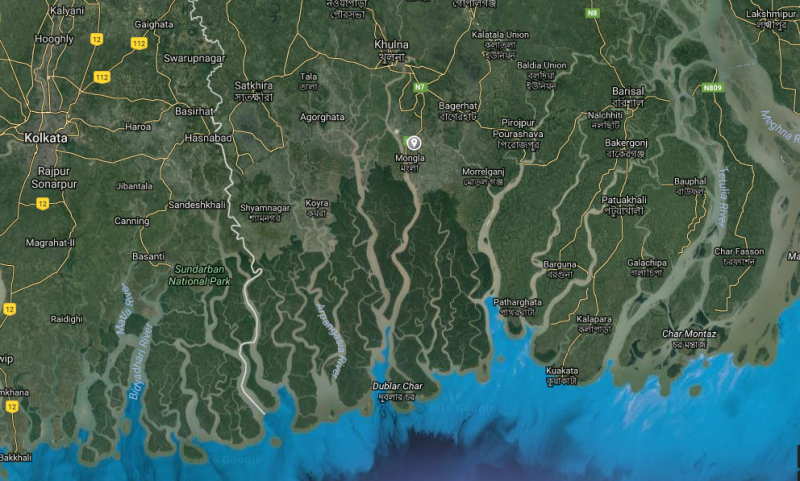 The Sundarbans are appear in dark green in this map, with the proposed site of the coal power station to the northeast indicated by a grey icon. Image: Google maps

The Sundarbans straddle the delta of the Ganges, Brahmaputra and Meghna rivers and are one of the world’s largest surviving mangrove forests. These liminal ecosystems are already greatly threatened by rising sea levels which threatens to drown the fragile trees.

Payal Parekh, a programme director at the NGO 350.org said there were alternatives available to provide electricity to Bangladeshis.

“Solar panels already provide affordable, reliable energy to 18 million people in the country, and other renewable energy options like wind power can be harnessed instead of condemning the Bangladeshi people to the toxic impacts from the 4.7 million tonnes of coal Rampal is set to burn every year,” she said.

Sundarbans is the largest unbroken mangrove system in the world & it helps mitigate the effects of #climatechange >> https://t.co/lGOVlrMumB pic.twitter.com/CUeI01y4TU

The Rampal station is financed by the Indian government. The Unesco/IUCN team noted that inadequate environmental assessments had been conducted prior to the initial land purchase for the plant.

Also on Tuesday, the Economic Times reported that an Indian-Bangla people’s movement had written to the Indian prime minister Narendra Modi, urging him to rethink the development.

“40% of the Sundarbans is in India and any damage to that will have devastating impact on thousands of fishworkers and forest dwellers depending on it, apart from the damage to the natural protection from natural calamities like tsunami and cyclones,” said the All India Union of Forest Working People and National Alliance of People’s Movements (NAPM).

India’s National Thermal Power Corporation, which owns the proposed plant, has been contacted for comment.

A second coal plant, the Orion power station, is also scheduled for construction near the site. Unesco officials questioned Bangladeshi assertions that the plant had been cancelled, given it remained apparently active on the Orion website.