An estimated 0.5C of global warming could be prevented if latest climate pact is implemented successfully, say scientists 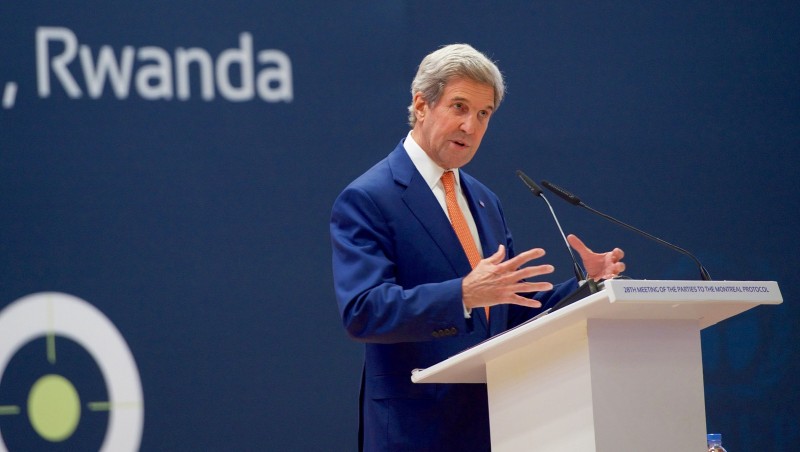 The climate’s low hanging fruit has been picked – amid some ill-concealed irritation over who gets the sweetest harvest.

The Kigali amendment to the Montreal Protocol to cut the use of potent warming greenhouse gases used in fridges and air conditioning has been described as the single most important step that the world can take to limit global warming.

The deal, received with a round of applause in the early hours of Saturday, has delivered on most of the promises made by the member countries last week, getting the world on track to avoid almost 0.5C warming by 2100.

Between 2020 and 2050, 70 billion tonnes of CO2 equivalent, comparable to the emissions of  nearly 500 million cars, will be prevented from entering the atmosphere thanks to a progressive reduction of HFCs.

These super pollutants trap thousands of times more heat than carbon dioxide, and are the world’s fastest growing group of greenhouse gases.

“The amendment means a lot to us,” said Rwandan negotiator Juliet Kabera. “It fosters commitment towards climate change mitigation globally, even if Rwanda is not a big consumer of HFCs. Championing this cause puts us in a leadership position which makes us very proud”.

The complex architecture of the agreement reflects the different economic and development needs of three main party groups.

While developed countries have frozen their HFCs consumption last year and are now aiming at reducing HFCs by 10% by 2019, most developing countries will be freezing their consumption in 2024, and achieve a 10% reduction in 2029.

A bluffer’s guide: The Paris Agreement of refrigeration

But significant concessions had to be made to countries who felt that a fast HFC phase down could hamper their growth prospects.

The small group comprising India, the Gulf States, Iran, Iraq and Pakistan will start phasing down its HFCs in 2028.

The adjustment also comes along with specific exemptions for countries that report a consistently hot climate and are in greater need of well established cooling technologies.

The Montreal Protocol is unique in that it delivers on measurable and compulsory emission reduction targets, which encourages investment in innovation and over time should help bring down the price of clean technologies.

While deals such as the Paris agreement are based on aspirational goals and their outcomes may be difficult to estimate, on Friday night analysts were already crunching numbers minutes after the structure of the Kigali amendment was informally circulated.

Countries will be enabled to achieve the objectives thanks to a network of local hubs set up by the UN Ozone secretariat to provide logistic support and measure progress. This model has proved successful for the past 20 years, leading to a steep fall in ozone depleting CFC gases worldwide, and there is hope that this can be repeated.

The amendment has been hailed as a victory for the climate and a business opportunity for companies working in the field of lower-global warming potential (GWP) alternatives.

“It’s also always  been a start-and-strengthen treaty, and I am confident in its power to get all the climate mitigation available, with even more from associated energy efficiency improvements.”

But a few questions are left open. “For example, the issue of energy efficiency” says Clare Perry, Environmental Investigation Agency, “We’ve agreed that we’d maintain and enhance commitment, but how would we do that, how much money would be given to that?”

However energy efficiency, that according to experts in Kigali could account for 80% of the climate benefits of a low carbon transition, has not slipped under the radar.

On Saturday morning, Rwanda officially presented a new energy efficiency registry to which countries can subscribe to keep track of their progress and share their experience with others. “We are aware of the benefits of maximising energy efficiency in terms of climate mitigation, so this is taking the amendment a step further” Juliet Kabera said.

According to Clare Perry, one of the weaknesses of this amendment is that the list of greenhouse gases licensed under the protocol has been slimmed down.

“One of the gases previously present on the list, HFC161, has been taken off. Regardless each gas’ global warming potential that in this case is very low, we believe it’s important that the official list is complete,” she said.

This would ensure transparent reporting, “reduce illegal trading and making it more difficult to smuggle controlled gases, which has happened in the past. We found the lack of agreement on this issue disappointing.”

The Montreal Protocol is not just about phasing down greenhouse gases, but also learn to manage them properly.

This week India announced plans to systematically destroy the powerful greenhouse gas HFC23, a byproduct of another widespread heat-trapping gas, something that countries such as the US are still failing to do.

Later in the morning Indian delegates commented on the outcome. “We are not happy with the way US handled the problem of HFC23. As for the amendment as a whole? Sometimes you just have to compromise, you can’t always get you want.”