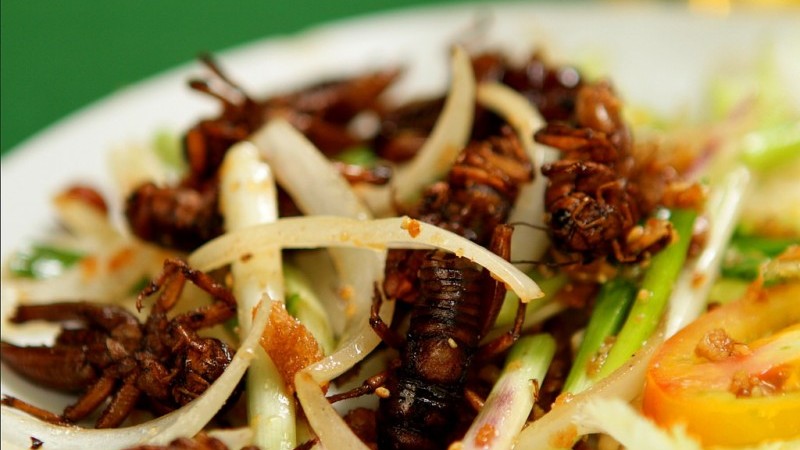 Eating insects may not be to everyone’s taste, but crickets have for centuries been eaten in many parts of the world − particularly in Asia Pacific region countries, where they are seen as a nutritious snack food, containing far more iron than spinach and other greens.

And scientists say that eating insects such as crickets can also help slow global warming.

Nutritionists point out that crickets have twice the protein level of beef. And curbing meat consumption is seen as an important ingredient in the battle against climate change.

Farming crickets is now big business in many areas. The trouble is that most such enterprises use chicken feed in order to rear crickets. And in poor communities, such feedstock can be too expensive and beyond the budget of the average farmer.

Now researchers led by Anna Jansson, professor of animal science at the Swedish University of Agricultural Sciences, have identified various weeds and agricultural by-products that can also function as feed for crickets.

“Since there are both climate and environmental benefits of eating insects, we believe the habit will become more common, even in western countries,” says Professor Jansson.

“What our study shows is that it is possible to rear crickets on feeds that don’t compete with other kinds of food production.”

The study, which appears in the Journal of Insects as Food and Feed, examined the effects of the diet fed to Cambodian field crickets (Teleogryllus testaceus) in captivity.

Cambodia is one of the world’s poorest countries, with many people suffering serious dietary deficiencies. It is estimated that 40% of children under five are malnourished.

The Swedish study involved feeding crickets a variety of weeds and crop residues over a period of 70 days.

Researchers found that discarded parts of crops − such as the tops of cassava plants – and weeds including the fringed spider flower (Cleome rutisdosperma) fattened up crickets just as much as chicken feed.

Both commodities, says the study, are available for free − or virtually free − in Cambodia and offer the chance for poor people to rear crickets and significantly improve their diets.

The researchers hope that crickets and other insects might, in time, become part of a western diet – and form a substitute for climate-harming meat consumption.

The UN’s Food and Agriculture Organisation recently suggested that eating insects could be one way to help feed the world’s rapidly-expanding population.