Rwanda sets its sights on a historic international deal

Its own cooling system may leak, but Kigali Convention Centre is hosting a revolution in climate-friendly air conditioning 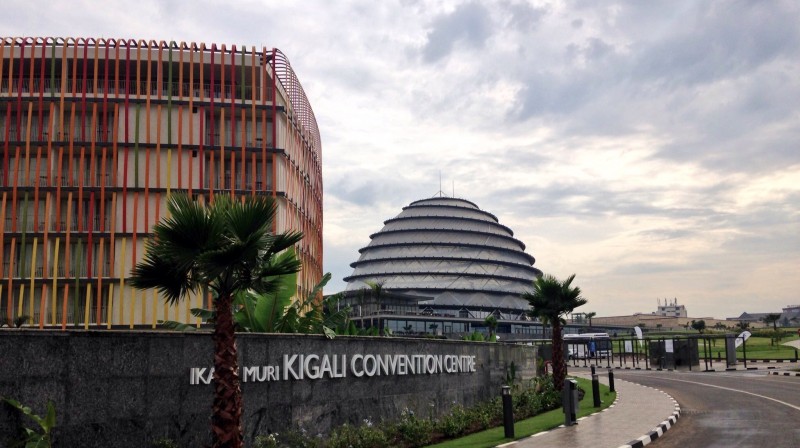 Negotiators are meeting in Kigali, Rwanda to strike a deal on HFCs (Pic: Lou Del Bello)

The project is a flagship development for the Rwandan capital Kigali, that aims to attract foreign investors and international diplomacy. A country still struggling in the aftermath of one of the worst genocides in human history, Rwanda has come a long way in just over 20 years, ranking remarkably low in corruption (the 4th least corrupt country in Africa in 2015) and growing in competitiveness and GDP.

This week it hosts a meeting of the Montreal Protocol, a treaty of similar ambition and resilience. Seen by some as the world’s most successful environmental policy, it drove the elimination of CFCs that were depleting the ozone layer.

Unfortunately, the substitutes industry came up with for use in fridges, aerosols and air conditioning – HFCs – are potent global warming gases. So now national delegates are pitching for another global technology shift.

Normally, these meetings draw about 500 people, but Dan Teng’o of the UNEP Ozone Secretariat is expecting a bigger crowd this time, as it is “a historic event”. US secretary of State John Kerry is among the high level representatives.

For Rwanda, this is the opportunity to have its name attached to a historic deal, but also to give a boost to its local economy: if you visit Kigali for the conference, a room at the fancy venue hotel awaits you at the discounted price of US$270 per night.

The Rwandans I spoke to shared an unfaltering belief that the future will be prosperous, despite the threat of climate change and the poverty that still plagues the country. “We are happy,” says Gerald Cyaruhinda, a waiter who works at the conference center. “The economy is growing and seeing all these international visitors makes me proud, it means that Rwanda is developing.” I ask him if he envisages an increase in the number of cooling systems installed as Rwanda gets richer. “Of course we need more refrigeration, it gets pretty hot here.”

It looks like the art of air conditioning is yet to be mastered at the venue: three months after its opening, the cooling system still causes leaks on the floor that soak shoes and bags. But being at an early stage of infrastructural development, Rwanda has a chance to go straight to climate-friendly coolants.

Rene Nzabakira, a student attending the meeting as an observer, is confident that it won’t be difficult for the economy to grow sustainably. “It all depends on how you design the new buildings,” he says. “In town, you’ll find small houses with few windows and really poor ventilation. Of course they get really hot under the sun and need artificial cooling.” But new buildings, he says, will have windows and a system of vents that bring in fresh air from outside. “No one likes to breathe chemicals, so we’ll keep that to a minimum.”

The developing world faces the unique challenge of tackling climate change while scaling up its industry, and the need to cater for a booming population will be the battleground of the coming talks.

In Rwanda as well as in fast-growing countries such as India, governments have an opportunity to improve energy efficiency as they phase down HFCs. “Urban India has currently about 5% of penetration of air conditioning technologies,” says Durwood Zaelke, Institute for Governance & Sustainable Development, “and it uses 50% of their peak power. So what happens when aircon penetration raises to 10, 20% or more? They are going to run out of power”.

A focus on energy efficiency may help developed and developing countries come together, and agree on an ambitious timeline for phasing out HFCs. Rwanda’s minister of natural resources, Vincent Biruta, says: “If the amendment is accompanied by strong efforts to promote energy efficiency, we could double the climate benefits.”