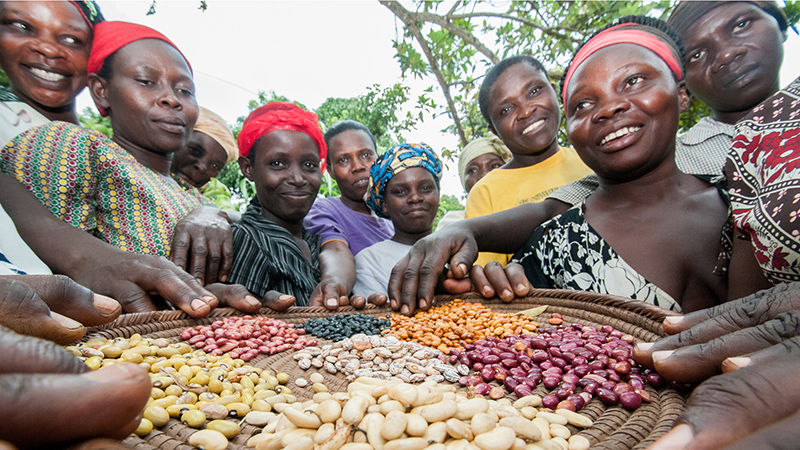 15 varieties of seeds have been introduced to farmers in Hoima, north-western Uganda (Pic: Georgina Smith / CIAT)

More than half of all the world’s maize crops and around a third of all wheat and rice will be grown in regions vulnerable to climate change in the next 50 to 100 years, according to new research.

At the same time, the world’s population will grow to 9 billion, and global food production will need to rise by from 60% to 110% by 2050 to keep up with demand.

Such changes will inevitably hit the poorest nations hardest, and will put at hazard the planet’s remaining wilderness areas and the surviving wild plants and animals that keep ecosystems stable.

But a second study argues that humans could have it both ways: they could produce enough food and still support sustainable development, protect the environment and meet food security targets at the same time.

However, this would mean a change of diet for Western nations, and reducing meat consumption would be the simplest way to free up water and land resources.

Researchers have repeatedly warned that climate change, especially in the form of extremes of weather, has an effect on the yield of crops per hectare, and other groups have calculated that political initiatives could protect both food security and the world’s forests, especially with a shift towards a plant-based diet.

And as science works by replication, even the most plausible findings tend to be examined again and again, with different data and new perspectives.

So an international team of scientists led by Dr Tom Pugh, who lectures in environmental science at the University of Birmingham in the UK, reports in Nature Communications journal that they matched the average yields per hectare of the three cereal crops that are the basis of the global food supply against maps of change in climate suitability over time.

They found that 43% of the maize, 33% of the wheat and 37% of all rice is grown in areas that will be vulnerable to climate change.

The most drastic reductions in potential will be in sub-Saharan Africa, South America and the eastern US.

Western and central Russia and central Canada, however, could offer new opportunities and both could see an increase in yield potential. And, for once, the researchers say both the poorest and the richest nations will be affected.

Developing nations would at least have the opportunity to close the yield gap – that is, exploit the full potential of the available land with better technology, water management and fertiliser use.

The richer nations are already producing more or less the highest yields possible, so farmers there could feel the negative effects more keenly.

“Of course, climate is just one factor when looking at the future of global agricultural practices,” Dr Pugh says.

“Local factors such as soil quality and water availability also have a very important effect on crop yields in real terms.

“But production of the world’s three major cereal crops needs to keep up with demand, and if we can’t do that by making our existing land more efficient, then the only other option is to increase the amount of land that we use.”

In contrast, a study published in Science Advances journal, led by Brian Walsh and Michael Obersteiner, ecosystem researchers at the International Institute for Applied Systems Analysis in Vienna, argues that another solution is possible.

Sustainable consumption and production practices on a global scale could meet the environmental aspects of the UN sustainable development goals that the world has set itself, and keep delivering food to the tables of 9 billion.

This would involve a concerted and co-ordinated set of approaches to grow more food with more careful use of fertilisers and water, and at the same time waste less food from spoilage.

But, chiefly, it would mean a reduction in livestock farming because, in per-calorie terms, animals require more land and water than plant crops. So by turning pasture into cropland, nations could preserve the forests and deliver more food at the same time.

“We find a general trade-off between policies designed to protect the environment, and those designed to reduce food prices,” Dr Walsh says.

“Yet there are some broader policies that can reduce these trade-offs and reduce the pressure on the system overall so that there’s more room to achieve multiple goals.”