There have been huge falls in renewable energy costs. But investment is still not enough to avoid dangerous climate change, says intergovernmental agency

The cost of solar generation has fallen 60% since 2010 (Pic: Activ Solar/Flickr)

Renewable electricity investment in 2015 was “more than sufficient” to cover the growth in global demand, according a new report by the International Energy Agency (IEA).

It was the first time in history funding for renewables alone was enough to meet increasing demand. The milestone was passed partly due to a slowdown in demand growth. But strong investment in renewables has continued and prices have fallen, meaning investors get more generating capacity for their buck.

The cost per watt of installing new onshore wind generation fell by 20% between 2010 and 2015. Over the same time solar PV dropped by a precipitous 60%. 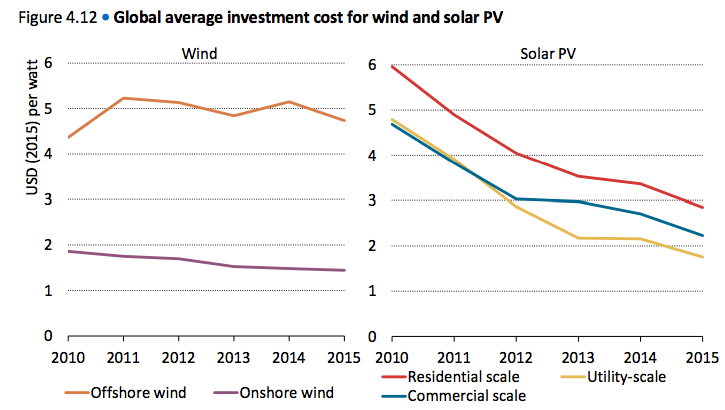 At US$313bn in 2015, the renewable energy sector was the largest single investment sector and made up a fifth of the global energy spend. The report concluded that the continuing strength of the sector was encouraging, but not enough to avoid dangerous climate change or meet the decarbonisation targets set by many countries.

“We see a broad shift of spending toward cleaner energy, often as a result of government policies,” said IEA executive director Fatih Birol. “Our report clearly shows that such government measures can work, and are key to a successful energy transition. But while some progress has been achieved, investors need clarity and certainty from policy makers. Governments must not only maintain but heighten their commitment to achieve energy security and climate goals.”

Indeed, despite the strong renewable performance, the carbon intensity of new electricity additions actually increased in 2015 after falling to record lows in 2014. This was due to large investments in new coal power in Asia and a huge drop in the less-carbon intensive gas sector.

Overall, investment in the energy sector fell by 8%, from US$2tn in 2014 to $1.8tn. The depressed oil price that persisted throughout the year and continues in 2016 caused oil companies to slash investment in exploration, said the World Energy Investment report.

Just one new carbon capture and storage (CCS) facility was built in 2015. Like most that have come before it, the plant at the Scotford oil sands upgrader in Canada will be used to pump more oil from the ground. If it can be attached to power plants on a massive scale is seen as a key way to reduce the carbon in the atmosphere.