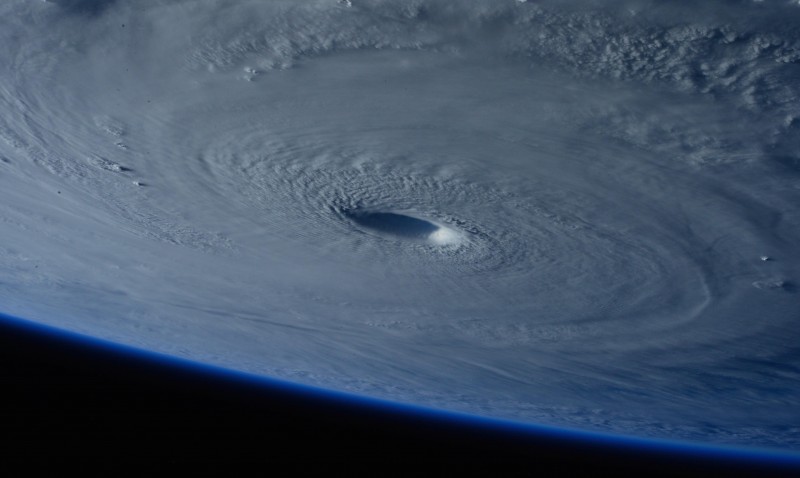 Typhoon Maysak, as seen from the International Space Station on April 2, 2015 (Pic: NASA/Flickr)

The typhoons that have slammed into the coasts of east and southeast Asia have become more violent, increasing in intensity by between 12% and 15% over the last four decades, according to a new study.

And the proportion of storms that meet the classification of category 4, with winds at 200 kilometres per hour, and category 5, with gusts of more than 250 kph, has at least doubled and may have tripled.

The good news for mariners is that those tropical cyclones that stay over the open ocean have not got significantly worse. The windstorms that pound the land, though, are potentially more destructive.

The cause of the intensity is an overall warming of ocean surface waters in the northwest Pacific.

“Given disproportionate damages by intense typhoons, this represents a heightened threat to people and properties in the region.”

The study was published in Nature Geoscience on the same day as theInternational Union for the Conservation of Nature (IUCN) study of the state of the oceans.

It confirms that the number of severe hurricanes has increased by 25% to 30% for each degree of global warming so far. And, once again, greenhouse gas emissions are to blame.

“Most of the heat from human-induced warming since the 1970s – a staggering 93% – has been absorbed by the ocean, which acts as a buffer against climate change, but this comes at a price,” says Dan Laffoley, marine vice-chair of theWorld Commission on Protected Areas at IUCN, and one of the study’s authors.

“We were astounded by the scale and extent of ocean warming effects on entire ecosystems made clear by this report.”

The IUCN study was compiled by 80 scientists from 12 nations and it highlights the scientific evidence of impacts on marine life – from microbes to the great sea mammals – that are likely to increase significantly even if humans drastically reduce fossil fuel combustion and cut the carbon dioxide emissions that drive global warming.

The scientists say ocean warming is already affecting ecosystems from the poles to the Equator, driving plankton, jellyfish, seabirds and turtles up to 10 degrees of latitude nearer to the poles.

In East Africa, ocean warming has reduced fish numbers by destroying parts of the reefs the fish depend upon. If humans go on releasing carbon dioxide emissions at the current rate, marine fisheries harvests in southeast Asia are expected, by 2050, to be up to 30% lower than the average for the years 1970-2000.

Both studies are confirmatory rather than ground-breaking. Researchers have repeatedly warned that Pacific tropical cyclones and Atlantic hurricanes are likely to become more destructive.

Atmospheric scientists Now Wei Mei and Professor Shang-Ping Xie, of theScripps Institution of Oceanography in California, report that they looked again at the data, to confirm first that landfalling storms – about half of all typhoons hit the coasts – have intensified, and secondly that rising sea surface temperatures are the cause.

“Ocean warming is one of this generation’s greatest hidden challenges – and one for which we are completely unprepared,” says Inger Andersen, director general of the IUCN.

“The only way to preserve the rich diversity of marine life, and to safeguard the protection and resources the ocean provides us with, is to cut greenhouse emissions rapidly and substantially.”