Smallholder farmers are helping to monitor water levels in the Sondu river catchment, to pave the way for better flood and drought warnings 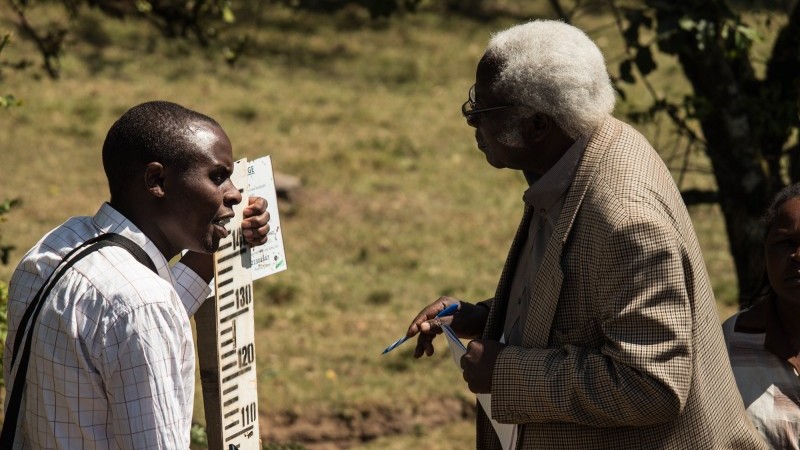 By Lou Del Bello in Kericho

Rattling along in a well travelled land cruiser from Nairobi to Kericho, a town of 100,000 people on the edge of the Mau Forest, I marvel at the fierce, thick vegetation along the route.

It’s hard to believe that one day all of this green might wither away, but this is a danger as drier seasons and soil erosion due to heavy, erratic rains take their toll.

During my trip across the Kenyan Rift Valley, I see early signs of such a dire outcome, amid the luscious forests and shiny tea plantations that are Kericho’s main source of income. 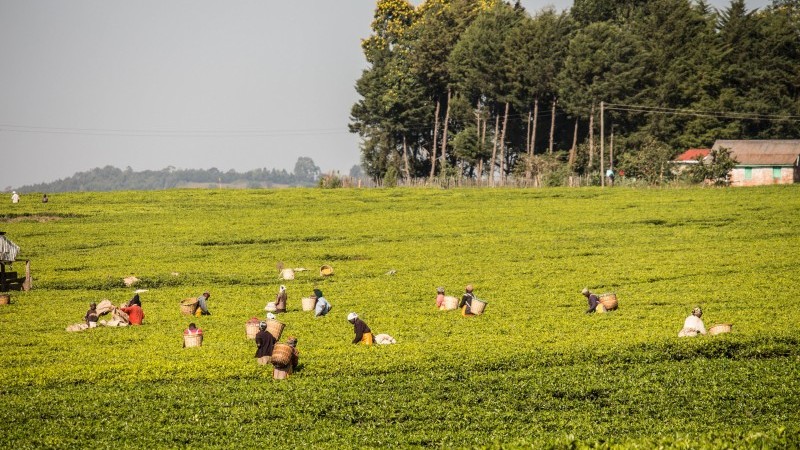 My guide, Suzanne Jacobs, a PhD student with the Centre for International Forestry Research (CIFOR) in Kenya, explains that climate change is one of the biggest challenges that her research program is trying to address. Many developing countries are not putting adaptation at the top of their priorities, despite being more vulnerable. Not only do they have to battle poverty first, but they also lack the basic infrastructure to ramp up climate action.

Kenya is one such example when it comes to water management in the face of increasing temperatures and erratic rains. Scientists know so little about the country’s water system that they in turn fail to inform local institutions on how better to allocate water when it becomes scarce, or how to prevent the worst impacts of floods. 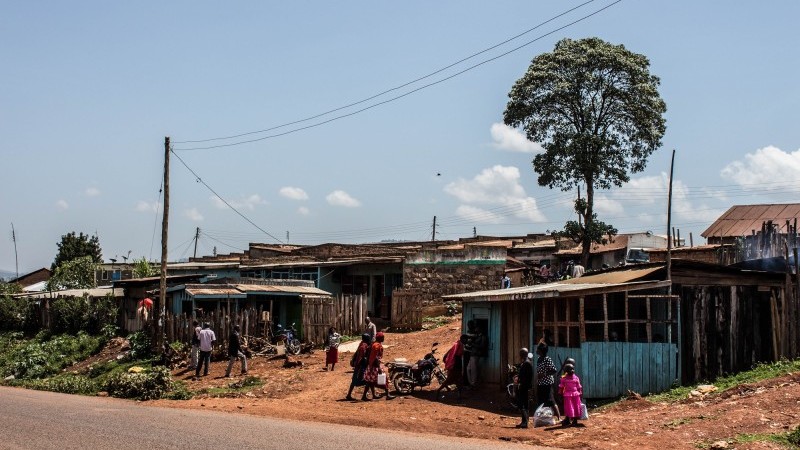 In order to develop predictive models for the short and long term, and learn to distribute resources more effectively, Kenya needs a monitoring system that simply isn’t there, and would cost a fortune to set up. Jacobs and her team have devised a strategy to make water system monitoring simpler, cheaper, and almost as effective as deploying thousands of high-tech sensors across the country.

The idea is to involve local communities in the daily measurement of water levels, turning smallholder farmers into citizen scientists. They teach people to read gauges installed at key locations, then send the value to a main database by a simple SMS text. 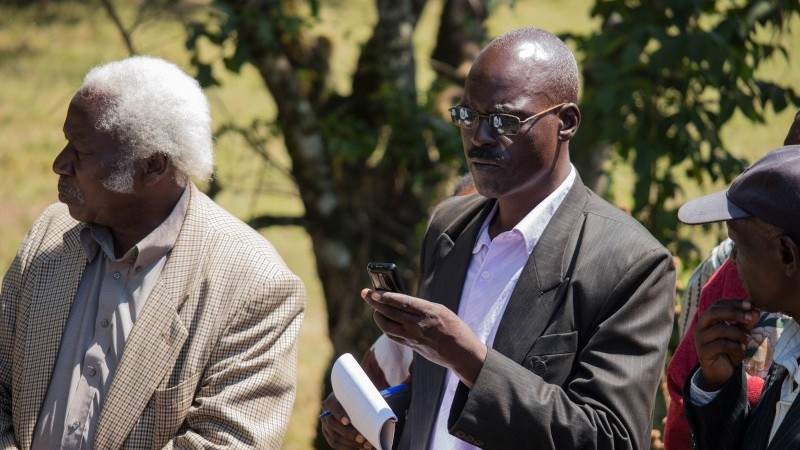 The project is being piloted at 14 sites in the river Sondu catchment, near Kericho, with a view of scaling it up to regional and national level if successful.

“We aim at receiving one text per station every day. This should be enough to build a comprehensive body of data capturing the dynamics of the local water system,” says Jacobs. She explains that the geological features of each place determine what happens to the rain that falls there.

“In some places, the soil will absorb a lot of precipitation through infiltration, the water will be stored in the catchment for a long time before emerging into the main water stream, and travel to Lake Victoria,” she says. “In other places, especially where the soil is depleted by grazing, the water flows straight into the river.” This means that the stream will be much “flashier”, Jacobs tells me, often causing floods.

Understanding the dynamics of a water system is vital both to plan ordinary resource management – who gets water and when – and be prepared in case of extreme events. A simple step such as mapping water levels across a region can make a world of difference, but the process is lengthy, at least at the beginning.

Zacchaeus Kemboi of the German Corporation for International Cooperation (GIZ), CIFOR’s partner for the project, is tasked with facilitating communication between researchers and citizens, who often speak little English.

I tag along to one of the training workshop where farmers of the Bomet county get their first introduction to the project, and I receive a warm welcome as well as permission to take photos. 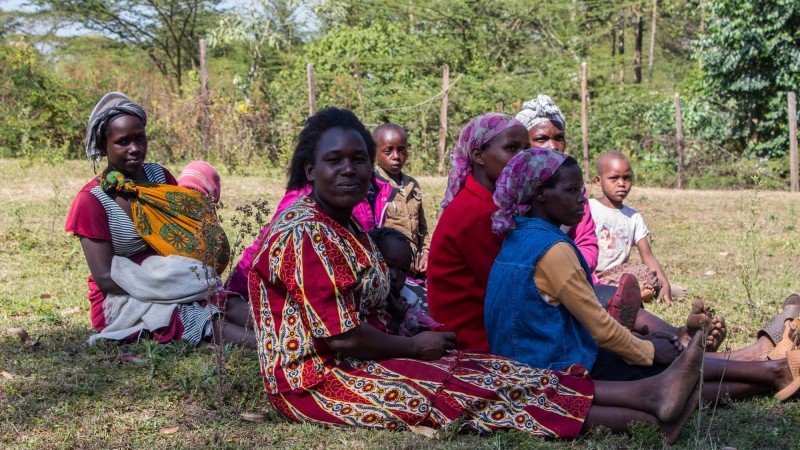 The farmers arrive in small groups at the meeting point, a monitoring station on the Lower Sisei river which consists of a simple gauge installed under a bridge. Even for a visitor exploring the site for the first time, the metal bar says it all: the water level is extremely low, especially given August and September are supposed to be the peak of the rainy season. Kemboi confirms that this season has been particularly dry, perhaps as a consequence of the heavy rains brought about by El Nino last year. 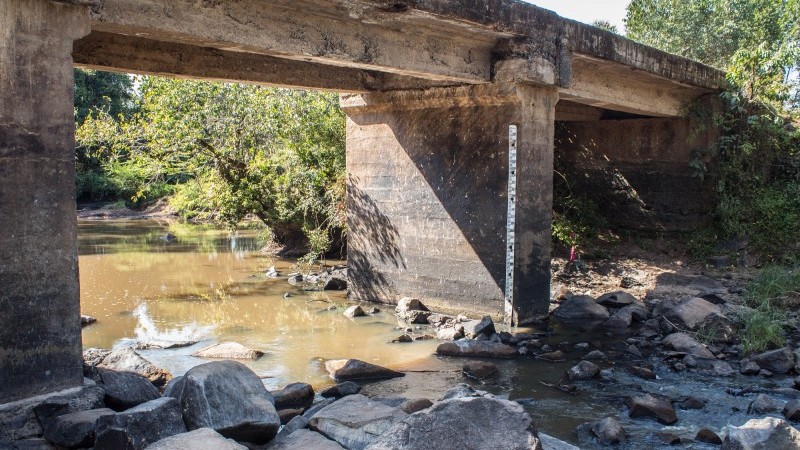 Men and women gather on a patch of grass where Jacobs, the village chair and Kemboi introduce the project and demonstrate how to read the gauge. People seem curious, but later on the researchers explain that involving them is one of the sticking points of the initiative: people may attend the meetings and show interest, sometimes out of politeness, but when it comes to taking action they often aren’t bothered.

The village women, who would be best placed to take part because they are the ones who collect water and wash clothes by the river on a daily basis, are present at the workshop but sit apart and don’t actively participate, leaving it to the men to approach the trainer and ask questions. 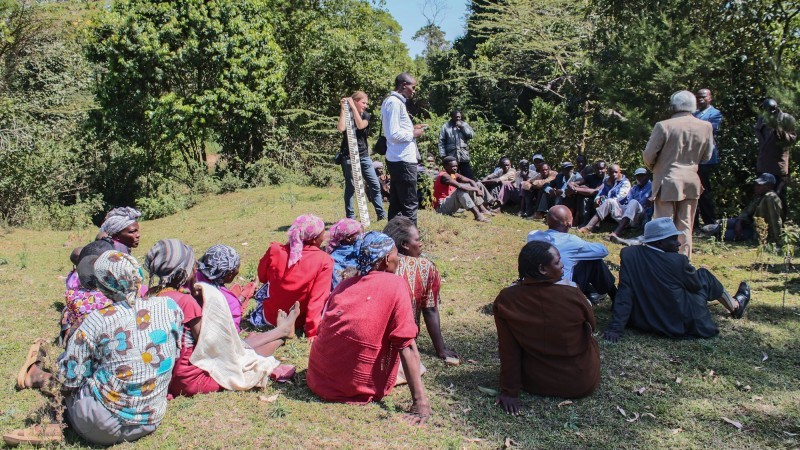 Jacobs explains that the cost of each SMS, 1 Kenyan shilling (US$ 0.01) can put people off. “It seems cheap to us, but if you have 100 shillings in your pocket, it’s a significant amount,” she says.
Perhaps the main factor that fuels people’s skepticism is the lack of a tangible, direct benefit. After the workshop, as we drive back to Kericho, Kemboi explains that “what’s in it for me?” was the main question he was asked during the day.

Grasping the importance of long term planning in the face of climate change is a challenge that crosses continents, and in different ways the whole world still struggles to come to grips with it. But some of the citizens who participate in the pilot group have quickly become enthusiastic champions. I meet them at the station on river Sondu, where a series of three gauges tells the same story: this year water is scarce. 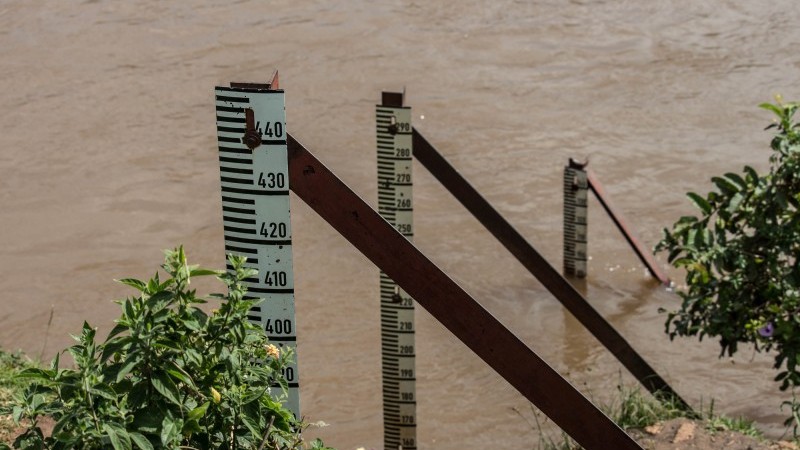 As we speak, women trail through the green patch towards the river to collect water or wash clothes, and further downstream others swim. Teresa Adhiambo, chair of the Water Resource Users association, tells me that the group protects the river by planting indigenous trees to strengthen the river banks. They also raise awareness within the community about the need to avoid toxic discharges, and since the monitoring project started a few months ago, about the importance of keeping an eye on water levels. 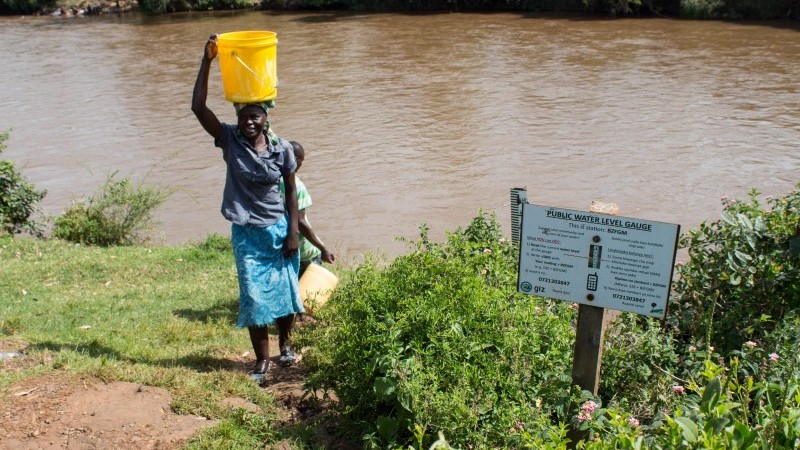 “We read the gauges and we send the level measurement via phone,” she tells me. “And right now we hope that these messages will help us.” I ask how these texts are going to make a difference for them.

“Our community is located on the lower catchment, so when there is a lot of rain from the upper catchment our homes get flooded and people have to shelter on higher ground.” she explains. A system that provides timely alerts on flood risk would be invaluable: “For us the [positive] impact [of this initiative] is very tangible.”

Zacchary Samoei, the association’s treasurer, also helps monitor levels at the water station. He tells me that over the past few years many springs that used to feed into the river have dried up, “and the environment is changing in many other ways. The rain is becoming scarcer by the year and water-borne diseases – such as typhoid, amoeba, cholera – are on the rise.”

Samoei confirms that a big part of their work consists of raising awareness of the problem among the public. As many villagers in rural areas do not speak English, they act as mediators passing on the knowledge provided by the researchers. But he also concedes that the association represents a tiny minority. Africans, as he puts it, are not easy to convince if they don’t see a direct, material return. “It takes time,” he says, “and you have to convince people step by step by setting an example and showing the benefits of a new idea or method.” 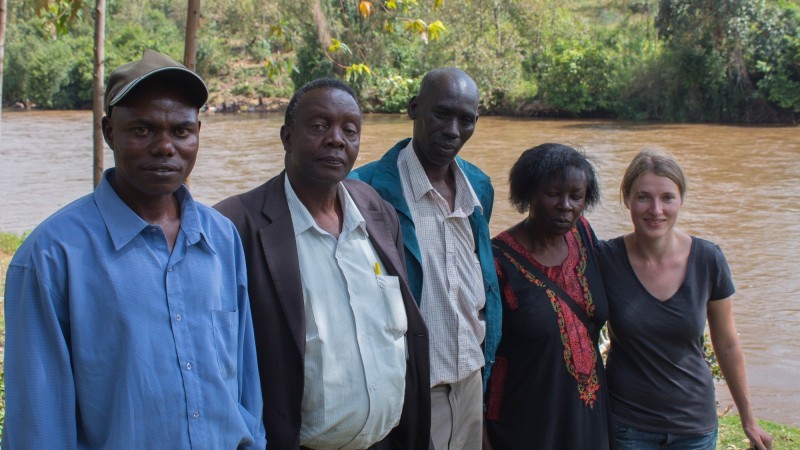 Citizen science has a long way to go in Kenya. If this pilot takes off, though, it could eventually bypass one of the main hurdles to climate change response in the developing world – the sheer lack of monitoring infrastructure – while helping communities to take control of their future.