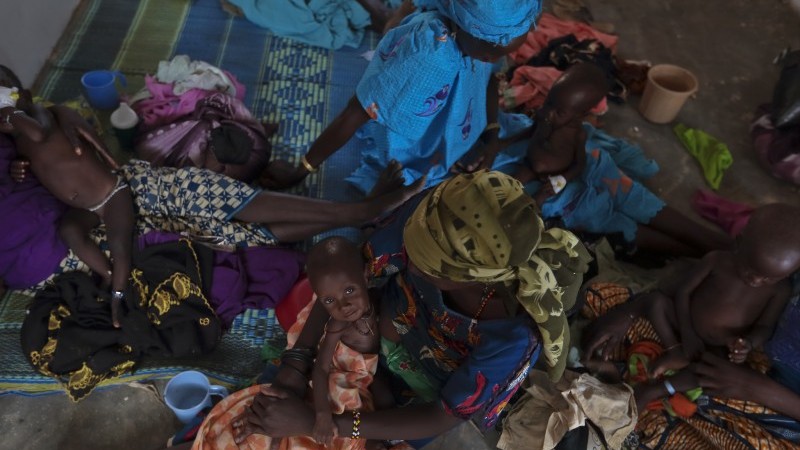 Mothers and babies wait to be seen at a hospital in Niger, which has the world's highest birth rate (Pic: Flickr/European Commission DG ECHO)

Human numbers are predicted to grow by 33% in the next 33 years – and that is worrying news for a world already struggling to deal with the impacts of climate change.

By 2050, there could be 9.9 billion people alive on the planet, and the global total is expected to hit 10 bn by 2053, according to the latest calculations by the Population Reference Bureau (PRB), a private not-for-profit organisation based in the US.

The number of people on the two American continents will rise by just 233 million to 1.2bn, and Asia will gain 900 million to reach 5.3bn, but Europe’s population will fall from 740 million to 728 million.

“Despite declines in fertility rates around the world, we expect population gains to remain strong enough to take us toward a global population of 10bn,” says Jeffrey Jordan, president of the PRB.

“Significant regional differences remain, though. For example, very low birth rates in Europe will mean population declines there, while Africa’s population is expected to double.”

These numbers will soar in a world increasingly challenged by climate change and the potential loss of “natural capital” in the form of natural biodiversity in forests, wetlands and other ecosystems that underwrite or deliver for free a whole range of natural services, from pollination to water management.

Nor are the PRB’s projections the worst. In 2014, UN statisticians looked again at their own projections and warned that human numbers will not stabilise at 9bn by 2100 as hoped. By the end of the century, these could be as low as 9.6bn or as high as 12.3bn.

But the most recent figures leave no room for complacency. Populations in 29 countries, mostly in Africa, are set to double. In Niger, with the world’s highest birthrate, numbers could triple.

In other parts of the world, fertility is falling. For example, Romania’s population could tumble from 20 million to 14 million by 2050.

In the light of such projections, scientists have warned of growing numbers of climate refugees, and have been trying to calculate ways in which harvests could increase to keep pace with human numbers, over decades in which prolonged drought and a greater frequency of heatwaves are expected to hit yields.

Researchers have argued repeatedly that food can be delivered without the destruction of the remaining forests in ways that would intensify climate change.

One in four Japanese people are older than 65. In Qatar and the United Arab Emirates, this proportion is one in 100. In sub-Saharan Africa, fertility rates are highest, with nearly all countries averaging six children per woman. In Europe, the average is 1.6 children. Some 33 nations in Europe and Asia already have more people aged over 65 than under 15.

So population rates are changing unevenly. Between 1992 and 2013, global annual carbon emissions rose by 60%, to 9.8bn tonnes. The greatest increase from any one country − and the largest total − was in China, which now emits 2.8bn tonnes. Another 43 countries reduced carbon emissions over the same timespan, with the largest reduction being in Ukraine.

Renewable sources, including hydroelectricity, now provide 18% of the world’s energy, and the average number of people per square kilometre of arable land worldwide is 526.

This average masks continuing inequality. In the developed countries, there are 238 people per square kilometre of arable land. In the poorer nations, there are 697.