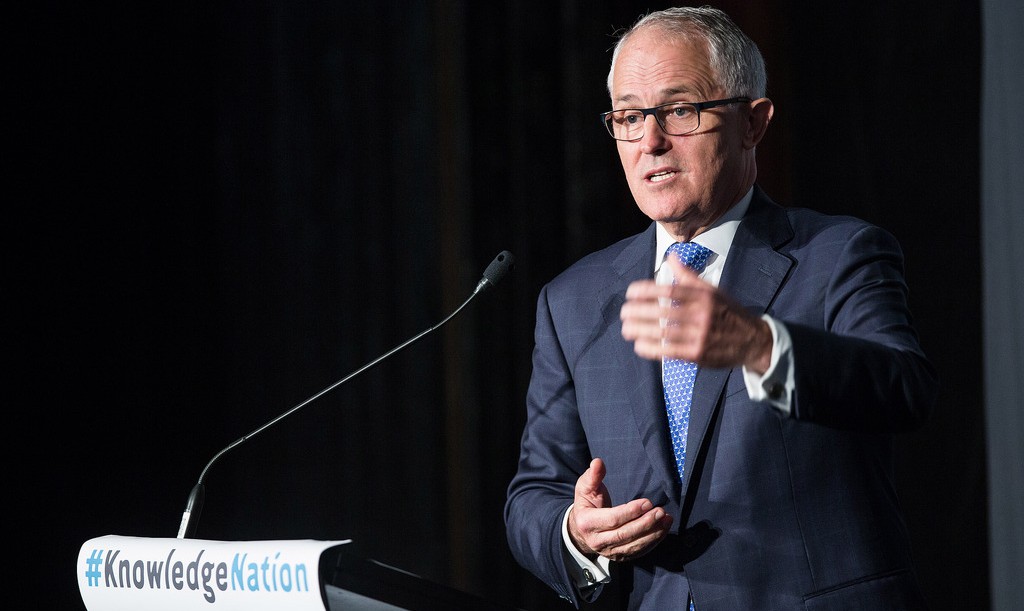 Australia’s climate bona fides will be exposed again as the prime minister sits with G20 leaders to discuss green investment while stripping more than $1 billion from renewable funding at home.

China, which will host the leaders of the world’s richest nations on Sunday and Monday, has enthusiastically pursued green finance as an agenda item since taking the G20 presidency last year.

It is expected that the final leaders statement will carry a commitment from governments to nudge trillions of dollars in private capital into clean investments.

Yet as Malcolm Turnbull sits around the meeting table in Hangzhou, his parliamentary colleagues in Australia will be pushing through a AU$1.3bn (US$1bn) cut to its clean energy funding.

As part of a sweeping “budget repair” bill, Turnbull’s government will reduce funding for the Australian Renewable Energy Agency, which makes grants to innovative projects, to $200m. This would effectively dismantle the initiative without replacing it.

Cut $1B from ARENA? That’s a bad idea for #innovation in #renewables. #saveARENA pic.twitter.com/a0wO3q4nYl

Clean Energy Council chief executive Kane Thornton said: “It sends very mixed messages for the Australian Government to be talking enthusiastically about its innovation agenda internationally when it is proposing to cut more than $1 billion from funding designed to give a leg up to new and innovation renewable energy projects.”

The Clean Energy Council and prominent energy research pioneers have been prominent in Australian media this week arguing that the move would push the country’s clean tech industry into the doldrums.

Support for their argument came on Wednesday, before the bill had even reach the floor of parliament, when a company told the Australian Stock Exchange that it was suspending two large biogas projects and was likely to cancel them if the cuts are passed.

The Australian Conservation Foundation (ACF) has warned that 2,695 jobs would be at risk in Queensland alone because of the cuts.

“Stripping Arena’s funding will put Australia well behind our G20 counterparts. There is a role for government funding and private sector investment to drive the global energy transition. If I were the prime minister I wouldn’t be surprised if I received a few strange looks around the G20 summit table when climate finance is discussed.”

Green finance has become a key topic at international meetings already this year. Bank of England governor Mark Carney set the stage in March, calling it a “fundamental issue that will go straight up to leaders”. The UN Environment Programme (UNEP) has gone as far as to call 2016 the “year of green finance”.

After the Paris climate conference in December 2015, a quickly-convened G20 study group began to investigate ways in which governments and the financial system could encourage investment in clean technologies.

The G20 hosts are leading the discussion, with the chief economist of China’s central bank Ma Jun dispatched to help develop a seven point plan for governments.

The study group’s recommendations were accepted by the G20’s meeting of finance ministers and central bankers in July.

Australia’s treasurer Scott Morrison was at that meeting and agreed a communiqué that agreed on the need for stronger efforts “to provide clear strategic policy signals and frameworks” and “scale up green financing”.

A similar statement of support, with Turnbull’s name on it, may well appear in the leaders communiqué from this week’s meeting.

“In my view there’s no real commitment for meaningful action on climate change,” he said. “What they are trying to do is make it appear that they are doing as much as many of the other OECD countries, but in fact… when you look at the real numbers [it is] one of the few OECD countries where fossil fuel emissions are still going up.”

Simon Zadek, co-director of the UNEP Inquiry into the Design of a Sustainable Financial System and a contributor to the G20 study group, said governments must balance frugality with stability.

“A predictable, stable and so viable policy environment is essential to encourage clean energy investment,” he said.

“This is all the more so where public funding is seen to be required to close perceived gaps in commercial viability of such investments, noting that the falling costs of solar in particular make such subsidies of reducing importance in many countries.”

But Thorton insisted that Australia’s innovation fund was still providing bang for its buck. So far the $1bn it has paid to hundreds of projects, has been matched by $1.2bn of private investment.

“Every dollar spent by Arena has helped to leverage private sector finance, and will deliver greater value for the energy sector in years to come. The cost reductions we have seen already in Australia, in large-scale solar for example, have been remarkable. All this is currently at risk,” said Thornton.

The prime minister’s office did not answer questions regarding green finance or the cuts to Arena. He will arrive in China in the wake of an international report that ranked Australia as the worst climate performer among all G20 nations.