The 8GW Sao Luiz do Tapajos hydropower project is expected to get the thumbs down from Brazilian regulators, in move cautiously welcomed by activists 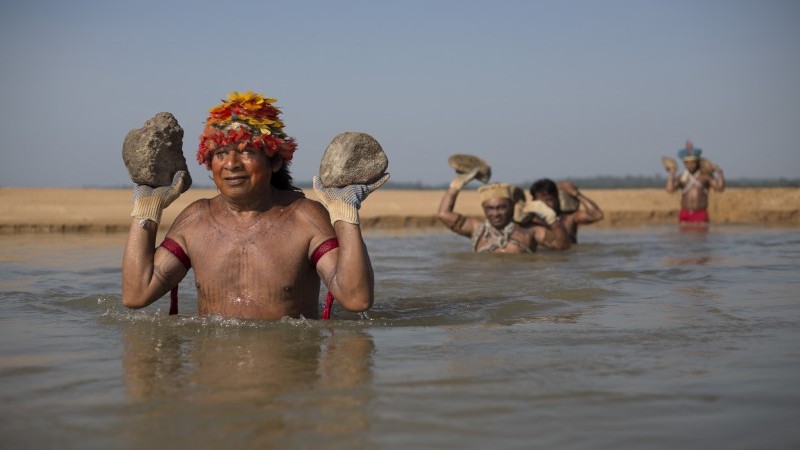 A mammoth 8GW dam in the Amazon rainforest is set to be denied a licence, in a sign Brazil could be shifting away from hydropower.

That was the outcome of a meeting of the top government lawyer and agencies for the environment and indigenous people this week, newspaper Folha de Sao Paulo reported.

They cited unanswered concerns about the impact of the Sao Luiz do Tapajos project, one of seven planned along the same river, on the environment and indigenous communities.

“When we heard this news, it made us very happy, because this is our home,” Munduruku leader Cacique Celso Tawe told Climate Home through an interpreter.

“The river for us is our life. We live by hunting and fishing and that is why our people oppose the dams.”

He was in Rio de Janeiro with other indigenous activists ahead of the Olympic games. They were highlighting the gap between the multicultural vibe promoted by organisers and the violence faced by forest-dwellers who protest development on their traditional land – whether hydro, logging or agribusiness.

Global Witness has recorded more than 150 murders of environmental defenders in Brazil since the last Olympics in 2012.

Many communities, including the Munduruku, have been struggling for decades to get land rights. Far from the cities, they get little help from law enforcement.

They fear things will get worse under interim president Michel Temer, who is seeking to make life easier for businesses in the economic slump by scrapping regulations.

Environment minister Jose Sarney Filho, on the other hand, has proved sympathetic to concerns about hydropower, calling for a more diverse energy mix.

Once built, hydropower dams generate renewable electricity on large scale, but that comes at a cost to the forest, wildlife and communities in their path.

Sarney is proposing a push for wind and bioenergy instead. It would be a significant shift for a country that gets three quarters of its power from hydro.

Sonia Guajajara, coordinator of the Brazil’s Association of Indigenous Peoples, welcomed Sarney’s stance but expressed scepticism it would be enough.

The similarly controversial 11GW Belo Monte dam is under construction, she noted, despite temporary wins for opponents along the way.

“The economic interests behind the project are so strong,” said Guajajara through an interpreter. “We need to stay vigilant.”