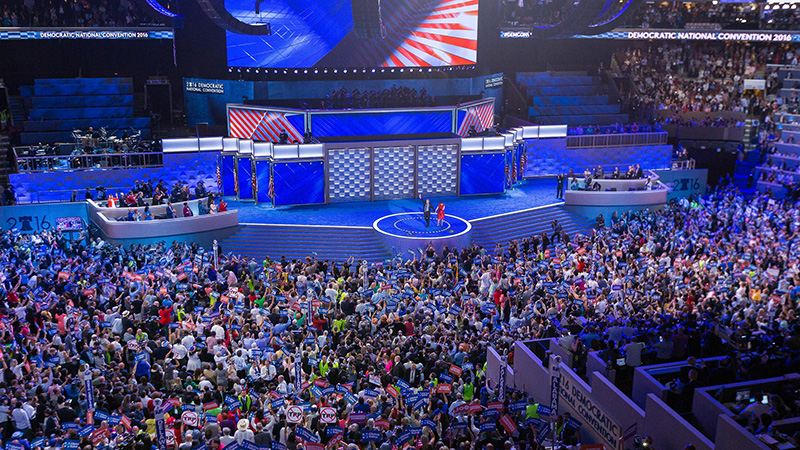 The US must implement the UN’s climate change deal and hold “every country accountable”, Hillary Clinton told the Democrat National Convention on Thursday.

Accepting her party’s nomination to run for the White House, Clinton said investment in clean energy could create jobs and create opportunity across the US.

“I believe in science. I believe that climate change is real and that we can save our planet while creating millions of good-paying clean energy jobs,” she said.

“I’m proud that we shaped a global climate agreement – now we have to hold every country accountable to their commitments, including ourselves,” Clinton added later in her address.

Democrat delegates this week approved what many observers say is the most ambitious climate change policy platform ever presented ahead of a presidential election.

It calls for a federal investigation into allegations fossil fuel majors like ExxonMobil lied about climate science, and promises to get half of electricity from renewable sources within a decade.

Very good to see @HillaryClinton pledging to actually enact her progressive platform. That's important; we will help her, and hold her to it

Earlier on Thursday evening the president of the League of Conservation Voters – a civil society group – told delegates he was adding Donald Trump to his ‘Dirty Dozen’ list of polluters.

“His policies would make climate change worse. His energy ‘plan’ would mean more pollution in our air, more poison in our water, and more public lands stripped for private profit,” said Gene Karpinski.

“That may be good for the Koch brothers and Big Oil. But Trump’s policies would be terrible for our families or our future.”

Asked on Fox News earlier this week whether he had said climate change was a hoax, Trump replied: “I might have.”

“They’re saying man made and I think it could have a minor impact but nothing to what they are talking about,” he said.