Wuhan province has suffered its heaviest downpours since 1998, exposing the inadequacy of flood defences 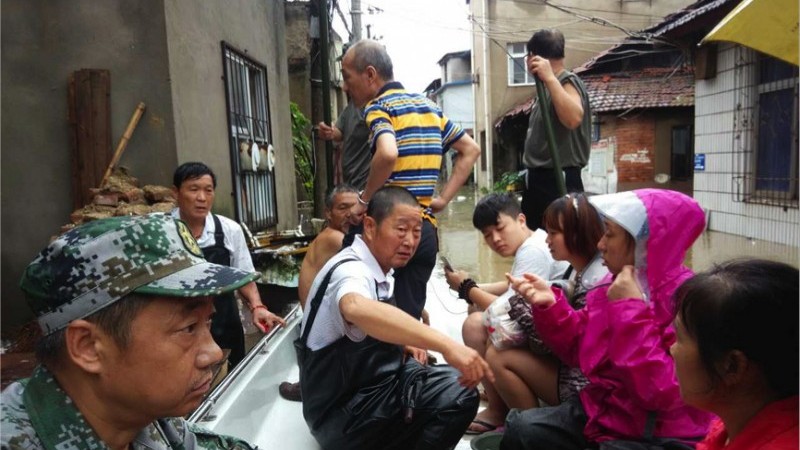 “It’s like someone poked a hole in the sky, the rain just keeps pouring down, you can’t breathe,” said Mrs Wu from Donghu, a district in Wuhan a city in central China with over 10 million residents.

Mrs Wu lives in Chunshuli, an affluent neighbourhood that’s relatively high above sea level. But even so, she doesn’t feel safe.

Since the beginning of July relentless downpours have overwhelmed Wuhan, paralysing its transport system and plunging vast areas of the city into chaos.

On July 6 the city’s education authorities announced that all schools would close, while a third of staff from the city’s criminal investigations bureau were redirected to flood emergency response teams.

The last time Wuhan suffered downpours on a comparable scale was in 1998, when monsoon rains affected 28 provinces and 223 million people, with around 3,000 losing their lives and causing 166 billion yuan (US$24.8 billion) in damage.

This year’s rainfall has already broken that record. Data from Wuhan’s meteorological authorities showed that between July 1 – 6, rainfall in Wuhan’s four main districts reached 932.6mm, 1087.2mm, 887mm and 833.9mm – as much as 549mm higher than 1998 levels in certain areas.

This year, 1.7 million people across the province have been affected by floods or hailstorms, leaving 69 dead, 16 missing, and 27.07-billion yuan’s worth of damage behind, according to the provincial civil affairs authorities.

China’s President Xi Jinping has ordered the army to step up its relief efforts and work alongside especially trained flood rescue teams, such as the Yangtze Rescue Volunteers. Images of people trapped in their homes or rescue teams saving thousands of pigs, which had been stranded at their farm, have been widely shared on social media.

People living in poor housing in low-lying areas have been worst hit. Rescue teams have been working around the clock to seal bank breaches and strengthen dykes.

In March, authorities issued a flood warning to people in the middle and lower Yangtze River Delta in advance of El Niño, an annual weather phenomenon resulting from currents in the Pacific Ocean.

El Niño occurs when water in the Pacific warms up around the equator. When temperatures climb to 0.5C or more for six months it is classed as an El Niño event (however, each country has a different threshold for what constitutes an event).

The 1997-1998 El Niño caused US$35 billion of damage and 23,000 deaths across the globe. Meterologists predict that this year’s El Niño could exact a heavy toll.

Why is Wuhan so badly affected?

Red flood alerts have been issued all along the Yangtze however Wuhan, capital of Hubei province and home to an enormous trading port, appears to be worst hit.

In the wake of Wuhan’s recent devastation the public are demanding to know how that money has been spent.

On July 6, the city’s flood command centre held a press conference, at which a drainage official explained that Wuhan is low-lying and built on drained marsh land. Others highlighted that the water levels in the Yangtze and Hanshui Rivers are higher than the city streets, meaning there is nowhere for rain falling on the city to go.

But topographical conditions do not mask the fact that the city has suffered from a lack of planning and investment in defence infrastructure. One urban climatologist who preferred not to be named told chinadialogue that: “Construction has reduced the city’s ability to absorb water; and lakes have been filled in, leading to more waterlogging.”

According to a report from the Beijing News, the city’s lake area has shrunk by a third over the last 20 years due to rapid urbanisation and land reclamation projects by property developers. This has greatly reduced the city’s ability to absorb floodwater.

But it is the residents who are suffering the most. Wang Bing of the Yangtze Rescue Volunteers said: “The rain is part of the reason but it’s mainly down to how the city’s been designed. It’s expanded so quickly they’ve only worried about what’s on the surface, not what’s underneath. It’s short-sighted.”

The city’s water authorities admitted that design standards were too low and unable to cope with rain and flooding on this scale.

Xiong Wei, of the Sun Yat-Sen University’s School of Sociology and Anthropology, grew up in Wuhan and remembers from his earlier years the prevalent notion that with the advent of the dam there would be no need for further flood prevention measures. And yet, since its completion local continue to repair dykes every summer Monsoon.

Even if the dam did start holding back more water, the benefits downstream at Wuhan would be limited.