May warned on climate threats to Brexit Britain

The incoming government must prepare for floods and heatwaves even as EU negotiations dominate politics, say advisers 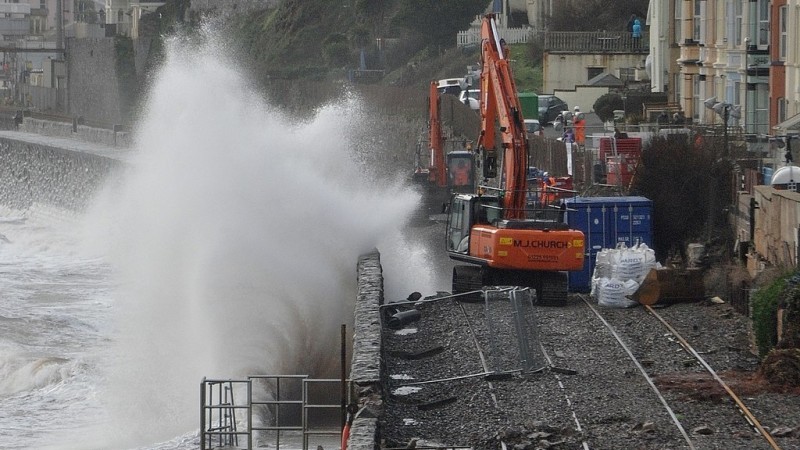 Repairs to a railway line in Dawlish, Devon after storm damage in 2014 (Pic: Lewis Clarke)

When Theresa May takes over as prime minister of Britain on Wednesday, climate change might not be top of her agenda.

The former home secretary has to renegotiate relations with the EU, the rest of the world and heal a divided country.

But the impacts of global warming are not going away, a report by the independent Committee on Climate Change (CCC) warns.

Heatwaves like the one that killed an estimated 2,000 British citizens in 2003 are projected to become the norm by the 2040s.

It is one of six priorities for action, in a review of evidence pulled together by 80 authors over three years.

Many of the issues are unchanged since the CCC last undertook a similar assessment five years ago.

Flooding remains at the top of the list, a status only reinforced by hundreds of millions of pounds worth of damage wreaked by storms in Cumbria last December.

“The risks don’t change because of Brexit,” said Lord Krebs, chair of the adaptation sub-committee. But he added: “Some of the legislation that might underpin our resilience and preparation for future climate changes is EU legislation and therefore there will be a need in due course to replace that with national legislation.” 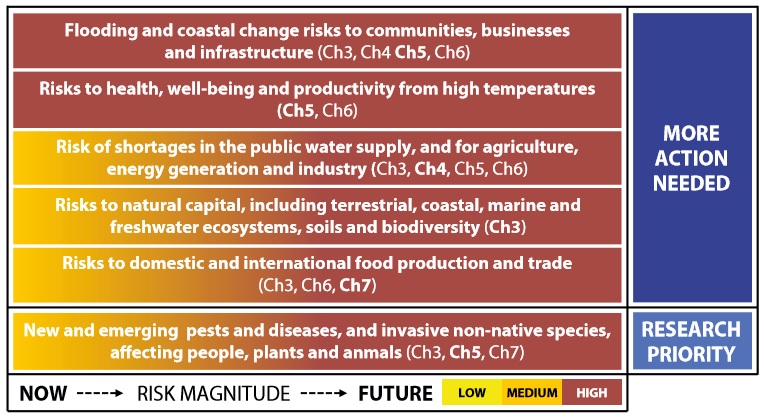 Meanwhile, the uncertainty is denting confidence for investment in resilient infrastructure, said report co-author Swenja Surminski, from the London School of Economics.

“We are already quite heavily constrained in terms of how much money goes into flood risk management,” she told Climate Home. “If there is economic uncertainty and we don’t know what the next budget is going to look like, that makes it difficult for businesses.”

These show the importance of working with other countries, according to co-author Neil Adger, geography professor at Exeter University.

“Risks associated with climate change in areas like agriculture, food security and migration are going to be amplified by Brexit,” he said. “That need for cooperation with our near neighbours is not going away.”

Report: Deadly European floods are in line with climate predictions
Weekly briefing: Sign up for your essential climate politics update

Christian Aid went a step further, calling on the government to convene a crisis committee.

“The UK is not insulated from global shocks,” said the charity’s political adviser Tom Viita in a statement. “The impact of climate change, both here and overseas, is coming back to bite us.

“The Climate Change Committee’s analysis shows red and yellow lights flashing all over the dashboard.”

While May has not been vocal on the issue, as a member of the National Security Council, she was involved in a 2015 review that outlined how global warming could trigger political instability, conflict and migration.

“Our long-term objective is to strengthen the resilience of poor and fragile countries to disasters, shocks and climate change,” it concluded. “This will save lives and reduce the risk of instability.”