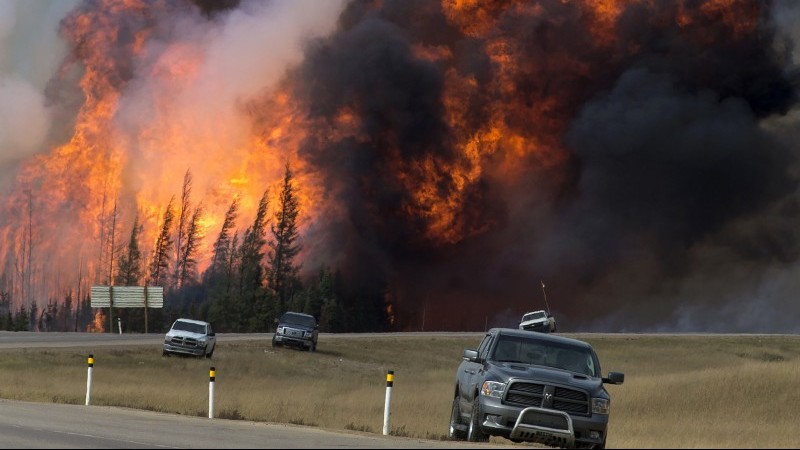 Scientists in Canada have confirmed an unexpected hazard in the world of climate change: the subterranean fire.

Peat bogs – massive stores of atmospheric carbon, held in partly-decomposed fibrous plant material – could catch fire and smoulder below the surface as they dry out in a regime of global warming.

It was dried peatlands that fuelled a blaze in Slave Lake, Alberta, in 2011, and the devastating forest fires around Fort McMurray this year also ignited peatland alongside the only highway of rescue or escape.

And the scientists warn in Scientific Reports journal that the mining or “quarrying” of peat for horticulture, agriculture and drainage, along with climate change, has made a growing number of the world’s peat bogs increasingly vulnerable to fire.

Such fires are dangerous. Smoke from one is estimated to have killed 3,000 people in 2010 in Moscow, while peat fires in southeast Asia in 2015 released at least 1 billion tonnes of carbon dioxide into the atmosphere, to accelerate global warming still further.

Peatlands cover at most only 3% of the planet, but they store a quarter or perhaps even a third of the world’s soil carbon. So climate scientists are not worried just about forest fires, but also about the other slow-burning hazard buried beneath many of the northern forests.

Black spruce in Canada has colonised peatlands, and the growth of timber above has dried what would normally have been a shield of moist moss, and has lifted water from the peat-rich soil to create fire hazard both above and below ground.

“You end up with a landscape with a lot more fuel than you would have had”, says Mike Waddington, professor of ecohydrology in the School of Geography and Earth Sciences at McMaster University in Hamilton, Ontario.

The answer is to manage the forests, and channel water back into the peat bogs. Waddington, one of the authors of the reports, explains: “The key is to keep peat wet and get that moss growing on the surface again.

“Our research shows very conclusively that if you can re-wet the system and get the key peat mosses growing on the surface, you can essentially put a cap on the system and limit burning, or resist fire completely.”