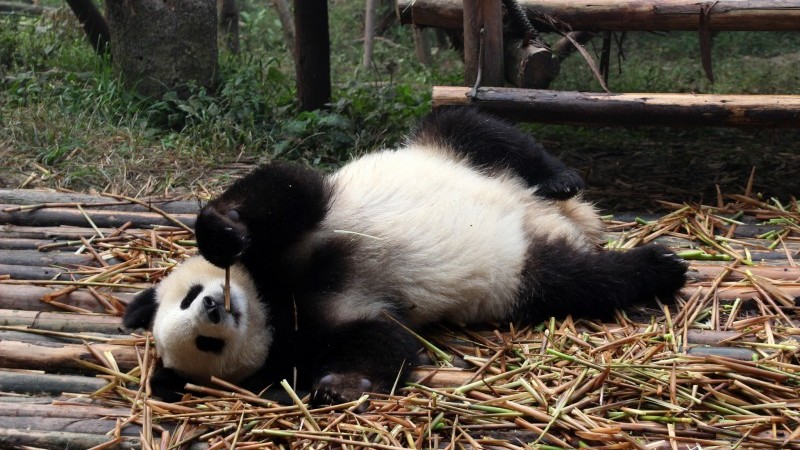 Will wild pandas have enough bamboo to eat in a warming world? (Pic: Flickr/iheartpandas)

The giant panda, worldwide conservation icon beloved by billions, and sweet-smelling flowers could both suffer adverse affects as a result of global warming.

Research into the subtle links between living things and their environment warns that rising temperatures could threaten food supply for pandas, and may also reduce the scent that petunias and other flowers use to attract pollinating insects.

Although food supplies for the moment are secure, and the once-threatened panda population is at least stable, research shows that global warming may introduce new and unforeseen challenges.

One of the challenges already familiar to biologists is that pandas aren’t happy in hot weather. As the temperatures hit 25C, they head for shade and cool places.

But the second is that rising temperatures could put food supplies at risk for China’s wild members of the species Ailuropoda melonoleuca.

Yuxiang Fei, a graduate student, and James Spotila, professor of biodiversity at Drexel University’s College of Arts and Sciences in the US, and colleagues write in Scientific Reports journal that they have made a closer examination of panda metabolism and found it to be higher than previously thought – less like a giant sloth’s, more like a bear’s, and nearly as active as that of a seal, kangaroo or deer.

Metabolism governs diet and digestion. And even though a panda needs to eat up to 14.6 kilograms of bamboo leaves and stems every day, or 43.7kg of bamboo shoots, there is currently enough bamboo in the wildlife reserves to permit the reintroduction of captive pandas to the wild.

But, the scientists say, they are very concerned. “Higher climate temperatures would upset the entire system in the panda reserves, eliminating vast amounts of bamboo,” Professor Spotila says. “Unchecked climate change will undo all the years of hard work by the Chinese to save their national icon.”

Meanwhile, global climate change is already beginning to affect the relationship between plant and pollinator. That might be because of a mismatch between the growth cycle of the flower and the breeding cycle of the insects that normally exploit it − or it could be something more subtle.

Alon Can’ani, a PhD student at the Hebrew University in Jerusalem, believes that rising temperatures are leading to a decrease in flowers’ production of alluring scents. Since it’s the smell that attracts the pollinator, this could be bad news not just for gardeners but for whole ecosystems.

Can’ani and colleagues report in Plant, Cell & Environment journal that they tested two varieties of hybrid petunia, and found that rising temperatures led to a fall in phenylpropanoid-based scent production in the flower.

Fortunately, science may offer a way around the problem for commercial growers, because Can’ani earlier identified the gene that could bypass this effect. He also identified a second gene that directly regulates scent emission.