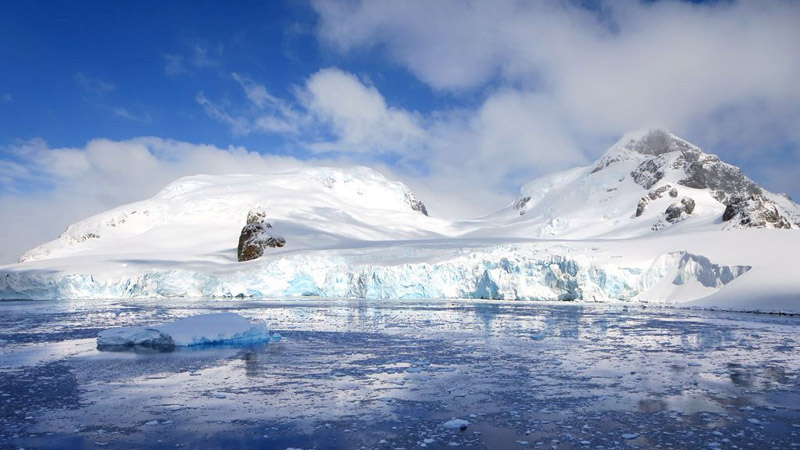 Parts of Antarctica are not only losing ice to the ocean, they have been doing so for 40 years.

Geoscientists from the University of Edinburgh and a US colleague report in Geophysical Research Letters that they looked at satellite imagery of West Antarctica’s coastline along a 2,000 km stretch and found that the region has lost 1,000 square kilometres of ice in four decades. The surprise is not that melting occurs, but that it has been happening for such a long time.

Frazer Christie, a PhD student, and partners analysed data from NASA, the US Geological Survey and the European Space Agency to find that ice has been retreating along almost the entire coast of Antarctica’s Bellingshausen Sea since satellite records began.

Some of the largest changes – where ice has thinned rapidly and retreated several kilometres since 1975 – matched those places where the ice front is deepest.

“We knew that ice had been retreating from this region recently, but now, thanks to a wealth of freely available satellite data, we know this has been occurring pervasively along the coastline for almost half a century,” Christie says.

He and his colleagues blame warmer ocean waters, rather than warmer atmosphere.

But, paradoxically, a study from the University of Washington in Seattle, US, reports that the waters lapping the continent are not warming substantially − because of a steady upwelling of much colder water from the depths of the Southern Ocean.

They don’t say warming will not happen, in response to human emissions of greenhouse gases in the atmosphere. Researchers have consistently and repeatedly warned that melting is on the way and is happening faster than previously thought.

But, for the moment, the southern waters may not seem any warmer because winds are pushing the relatively warm surface water towards the equator, allowing ocean currents to upwell from depths of thousands of metres to keep the surface at low temperatures. So warming in the region could take several centuries.

The study, published in Nature Geoscience, addresses the puzzle that while global average temperatures have increased, and Arctic polar temperatures and those around the West Antarctic peninsula have increased faster than average, the Southern Ocean has stayed cool.

“With rising carbon dioxide, you would expect more warming at both poles, but we only see it at one of the poles, so something else must be going on,” says oceanographer Kyle Armour, lead author of the study. “We show that it’s for really simple reasons, and ocean currents are the hero here.”

The study – as other scientists have pointed out – highlights once again the role of the oceans in controlling the pattern of global warming.

Emily Shuckburgh, head of the Open Oceans Research Group at the British Antarctic Survey, says: “It should be noted that, as a whole, the Southern Ocean has shown considerable warming, from the surface to depths of more than 1,000 metres, and that changes to the circulation in the Southern Ocean have been bringing more relatively warm water up under the ice sheets, melting them from below.

“The result of this paper highlights the important role the ocean itself has in shaping the patterns and magnitude of surface temperature change, and it emphasises the limitations of using surface temperature as a simple indicator of the accumulation of heat in the Earth system resulting from the anthropogenically-enhanced greenhouse effect.”