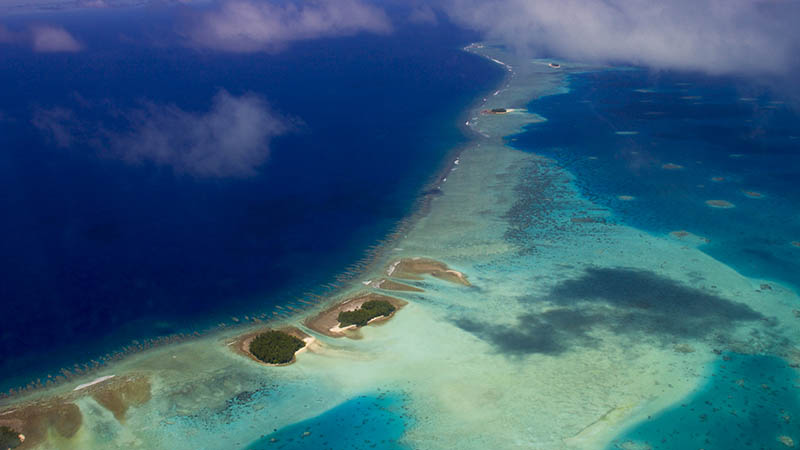 From outer space they are tiny and isolated dots on the oceans, green and brown pinpricks on a vast canvas of blue.

But at the global climate talks, the coalition of countries classed as small island states are moral titans, fighting a battle they believe is for survival.

Vulnerable and vocal, 14 of the 16 countries to have ratified the UN’s new global climate pact belong to this 44-strong group, known by the acronym AOSIS.

More are expected to imminently approve the deal, part of a strategy by governments who consider themselves at high risk from global warming to compel leading carbon polluters to go green.

“We are trying to shame people or encourage them, I think we’re hoping we’ll get a critical mass,” says Ronnie Jumeau, climate envoy to the Seychelles, which ratified the deal on 29 April.

Approved after two weeks of UN talks in December 2015, the Paris Agreement needs 55 countries covering 55% of emissions to ratify it before it can come into force.

The tiny size of these island states won’t have much say in the greenhouse gas total needed, but they’ll add a valuable boost to country numbers.

And, Jamaica diplomat Clifford Mahlung tells Climate Home from UN talks in Bonn, their presence on the UN roster will be a valuable bargaining chip to compel other, bigger emitters to step forward.

“It gives the moral persuasion. There’s no excuse. We have been the moral compass from day one,” he says.

Despite huge diplomatic and economic imbalances, small islands have long driven progress at UN climate talks, famously presenting a first draft of a global pact back in 1991.

As scientific understanding of climate impacts has grown, so too has the level and urgency of demands for action from leaders in the Pacific, Indian Ocean and Caribbean.

The most recent Intergovernmental Panel on Climate Change (IPCC) report determined sea level rise of over 1 metre was guaranteed over the next two thousand years, which would wipe out 15% of Pacific islands.

Many Pacific governments point to the devastation inflicted by Cyclone Pam in 2015, which left thousands in Vanuatu and Tuvalu homeless and without food or water.

Rising temperatures are likely to increase the severity of tropical cyclones, according to the IPCC, but wider fears of future impacts are shared among small island communities worldwide.

“There’s an urgency as you will appreciate with the SIDS [small island developing states] and increasing efforts to adapt to negative impacts of climate change, whether it’s sea level rise, droughts, floods, cyclones or ocean acidification,” says Mahlung.

Strategically, some observers say developing countries are best advised to sit and wait for richer nations who hold climate finance purse strings to sign and commit.

Talks on establishing how the new agreement will work have only just got started. Many of the monitoring, financial and policy levers proposed simply exist for now on paper.

But with time running out to limit warming to a new UN goal of 1.5C above pre industrial levels, waiting to see what crops up is not a gamble small islands can take, argues Jumeau.

As the list of countries to formally back the deal grows, he hopes the focus will turn to those who have not signed up.

“What we are trying to do is put our money where mouth is. We are prepared even when it’s not clear what [financial] assistance we will get,” he says.

The major goal for 2016 is to ensure the US and China, which together cover more than 40% of emissions, meet their pledge to join the club. That could act as a prompt to others.

“If we can get India to follow the US and China we’re a good way there [to 55% emissions]. We are hoping the US steps forward, with Obama on way out can afford to take certain actions,” Jumeau adds.

In turn, this will build a wider confidence that all countries plan to increase their climate commitments beyond last year’s raft of pledges, argues Mahlung.

With 2018 pencilled in as the year for a global “stocktake”, he says keeping the ball rolling now could allow governments to adopt measures that might limit warming to safer levels.

“I think many countries will be in a position to scale that up,” he says. If they can’t, it’s likely to be the small islands who feel the brunt first.