Australian PM has long talked up climate action, but brutal election campaign will test his commitment to low carbon future 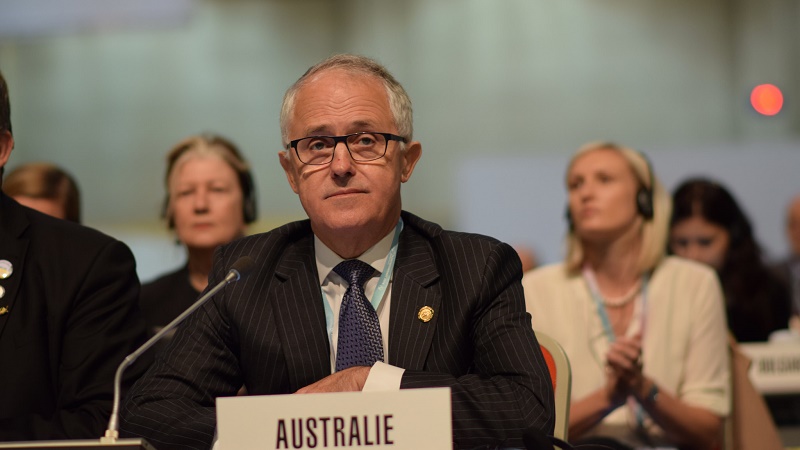 “We will be talking about our national economic plan every single day. Jobs and growth. Confidence. Australia – its future. That’s what this election is about.”

The words there of Malcolm Turnbull at the start of Australia’s eight-week general election campaign, which he hopes will consolidate his position as prime minister.

What was missing in his opening 10-minute address was any mention of climate change, an issue that polarises Australian politics like no other.

Since John Howard’s 11 years as prime minister ended in 2007, the office has changed hands five times, and each time the toxic politics of carbon and climate played a part.

In some parts of Australia, temperatures have been 10°C higher than usual in recent days #climatechange pic.twitter.com/WFN0DEzy6R

Despite his wish to focus on Australia’s sluggish and commodity-dependent economy, day one of the campaign saw Turnbull forced to focus on his climate plans.

Labor and the Green Party – the country’s third major force – have both unveiled ambitious climate plans that call for a radical change in Australia’s energy systems.

The Greens want “net zero or net negative Australian greenhouse gas emissions within a generation”. Boasting 10 of 76 senators means they are not lightly ignored.

“Australia’s rich renewable energy resources provide the opportunity for Australia to be an energy superpower in a world where clean energy dominates,” reads its energy manifesto.

In contrast, Turnbull seems content to stick with the policies laid down by Abbott, scourge of Australia’s climate scientists and clean energy sector, who once called climate change “crap”.

Those policies saw Australia’s emissions rise 0.2% in the last quarter of 2015, according to government data.

“For Australia to go out on its own and nearly double its target would achieve – would impose a huge cost on Australians and would abandon the leverage we have to get a stronger global response.”

Few analysts Climate Home has spoken to believe Turnbull has much wiggle room, leading a party whose members voted in March for the government to investigate the UN climate science panel.

The motion called for public debates between “independent climate scientists” and members of the IPCC on claims the “science is settled”. In New South Wales, 70% voted in favour.

Despite his strong words of support for a global climate deal, many of Turnbull’s MPs are happy to fly in the face of science, notably George Christensen and Cory Bernardi, vocal supporters of coal and moves to nix carbon cutting plans.

Last year the businessman Maurice Newman – then an advisor to Abbott – took this to new levels claiming climate change was a hoax to deliver a “new world order” under the UN.

The reasons for the scepticism appear fairly straightforward. Australia is the world’s fifth largest coal producer. Exports of iron, coal, gas, oil and gold draw in well over AUS$120 billion a year.

The mining lobby is influential, heavily pushing plans for a $22 billion coal mine proposed by Adani, which wants to ship 60 million tonnes of coal to Asia every year.

Last week, Australia’s environment minister Greg Hunt was exposed in the Guardian for claiming in a submission the mine would have no “substantial” impact on global warming.

Yet Australia is on the frontline of a changing climate.

Inland, the decline of rainfall over its south and south west farmlands has been linked to the impact of carbon emissions, while 20 towns and cities in Queensland just experienced their hottest May on record.

“There’s a bit of a game going on at the moment,” said veteran politician Tony Windsor, standing for election as an independent in New England, in a video posted on twitter.

Turnbull’s rhetoric is unlikely to change much in the coming eight weeks, given the widely-regarded pollster and campaign strategist Mark Textor is running his operation.

Not that it always works. Textor arrives back in Australia fresh from orchestrating Zac Goldsmith’s disastrous campaign to be London Mayor, which largely ignored his green credentials.

That – according to UK conservative commentator Tim Montgomerie – was a mistake that cost Goldsmith dear. “Conservatives need to dig deeper, and search for a broader, more popular centre-right agenda,” he wrote.

Selling clean energy shouldn’t be the hardest job in one of the world’s sunniest countries, but the sector sounds worried.

The country needs 6 gigawatts of renewables to meet its clean energy target, but government attempts in the past 12 months to remove and then reduce the goal has left developers uncertain.

Meanwhile axes to climate science funding and Turnbull’s public support for the coal industry has left many confused over the intentions of the one-time advocate of tougher climate policies.

Interview: Why South Australia is eyeing a renewable future

What is clear is that – as usual in Australian politics – this will be a brutal campaign across the airwaves and social media, and that leaves some climate campaigners worried.

“The risk is that attention and internal polarisation drives the government to bolster scare campaigns, say silly things or lock themselves into unhelpful positions,” John Connor, CEO of the Sydney-based Climate Institute NGO, told Climate Home.

“In short, climate is a triple edged sword this election. It will test the potency of old scare campaigns, the support for action and the capacity of both parties leadership to leave enough room for credible policies in the election aftermath that both know will require stronger policies.

“How much damage it will inflict on any or all of these over a historically long election campaign remains to be seen.”